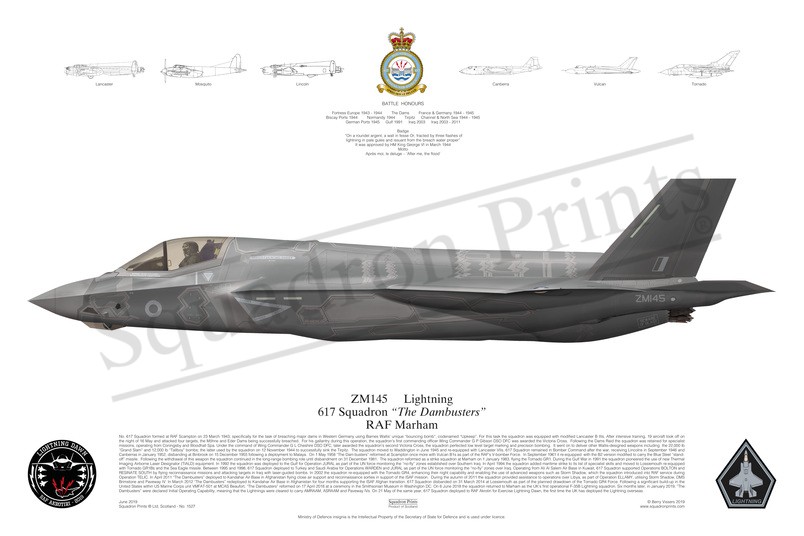 Squadron Prints Lithograph No. 1527 - ZM145, Lightning, 617 Squadron "The Dambusters", RAF Marham. No. 617 Squadron formed at RAF Scampton on 23 March 1943, specifically for the task of breaching major dams in Western Germany using Barnes Wallisâ€™ unique "bouncing bomb", codenamed "Upkeep". For this task the squadron was equipped with modified Lancaster B IIIs. After intensive training, 19 aircraft took off on the night of 16 May and attacked four targets, the Mohne and Eder Dams being successfully breached. For his gallantry during this operation, the squadronâ€™s first commanding officer Wing Commander G P Gibson DSO DFC was awarded the Victoria Cross. Following the Dams Raid the squadron was retained for specialist missions, operating from Coningsby and Woodhall Spa. Under the command of Wing Commander G L Cheshire DSO DFC, later awarded the squadronâ€™s second Victoria Cross, the squadron perfected low level target marking and precision bombing. It went on to deliver other Wallis-designed weapons including the 22,000 lb "Grand Slam" and 12,000 lb "Tallboy" bombs; the latter used by the squadron on 12 November 1944 to successfully sink the Tirpitz. The squadron moved to Waddington in June 1945 and re-equipped with Lancaster VIIs. 617 Squadron remained in Bomber Command after the war, receiving Lincolns in September 1946 and Canberras in January 1952, disbanding at Binbrook on 15 December 1955 following a deployment to Malaya. On 1 May 1958 "The Dambusters" reformed at Scampton once more with Vulcan B1s as part of the RAF's V-bomber Force. In September 1961 it re-equipped with the B2 version modified to carry the Blue Steel "stand-off" missile. Following the withdrawal of this weapon the squadron continued in the long-range bombing role until disbandment on 31 December 1981. The squadron reformed as a strike squadron at Marham on 1 January 1983, flying the Tornado GR1. During the Gulf War in 1991 the squadron pioneered the use of new Thermal Imaging Airborne Laser Designator (TIALD) equipment. In 1992 the squadron was deployed to the Gulf for Operation JURAL as part of the UN force monitoring the "no-fly" zones established over Southern Iraq. In April 1994 the squadron added maritime strike to its list of specialist skills and moved to Lossiemouth re-equipped with Tornado GR1Bs and the Sea Eagle missile. Between 1995 and 1998, 617 Squadron deployed to Turkey and Saudi Arabia for Operations WARDEN and JURAL as part of the UN force monitoring the "no-fly" zones over Iraq. Operating from Ali Al Salem Air Base in Kuwait, 617 Squadron supported Operations BOLTON and RESINATE SOUTH by flying reconnaissance missions and attacking targets in Iraq with laser-guided bombs. In 2002 the squadron re-equipped with the Tornado GR4, enhancing their night capability and enabling the use of advanced weapons such as Storm Shadow, which the squadron introduced into RAF service during Operation TELIC. In April 2011 "The Dambusters" deployed to Kandahar Air Base in Afghanistan flying close air support and reconnaissance sorties in support of the ISAF mission. During the autumn of 2011 the squadron provided assistance to operations over Libya, as part of Operation ELLAMY, utilising Storm Shadow, DMS Brimstone and Paveway IV. In March 2012 "The Dambusters" redeployed to Kandahar Air Base in Afghanistan for four months supporting the ISAF Afghan transition. 617 Squadron disbanded on 31 March 2014 at Lossiemouth as part of the planned drawdown of the Tornado GR4 Force. Following a significant build-up in the United States within US Marine Corps unit VMFAT-501 at MCAS Beaufort, "The Dambusters" reformed on 17 April 2018 at a ceremony in the Smithsonian Museum in Washington DC. On 6 June 2018 the squadron returned to Marham as the UKâ€™s first operational F-35B Lightning squadron. Six months later, in January 2019, "The Dambusters" were declared Initial Operating Capability, meaning that the Lightnings were cleared to carry AMRAAM, ASRAAM and Paveway IVs. On 21 May of the same year, 617 Squadron deployed to RAF Akrotiri for Exercise Lightning Dawn, the first time the UK has deployed the Lightning overseas.