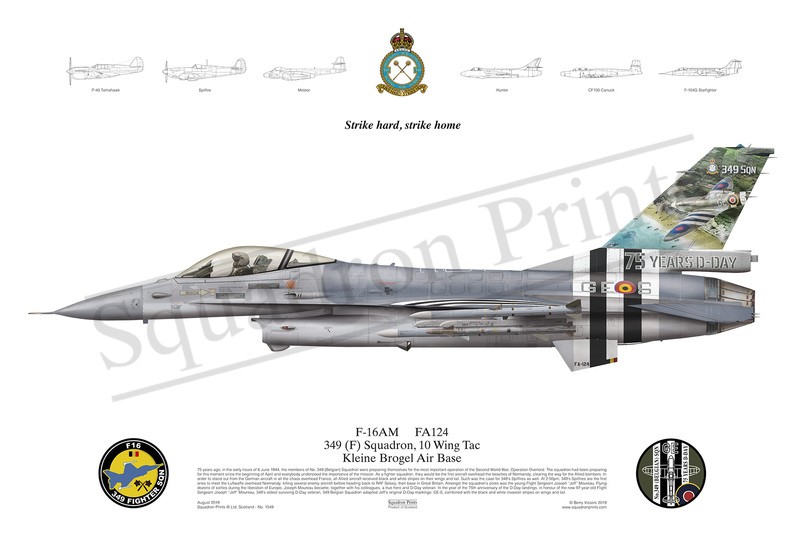 Squadron Prints Lithograph No. 1549 - FA124, F-16AM, 349(F) Squadron, 10 Wing TAC, Kleine Brogel Air Base. 75 years ago, in the early hours of 6 June 1944, the members of No. 349 (Belgian) Squadron were preparing themselves for the most important operation of the Second World War, Operation Overlord. The squadron had been preparing for this moment since the beginning of April and everybody understood the importance of the mission. As a fighter squadron, they would be the first aircraft overhead the beaches of Normandy, clearing the way for the Allied bombers. In order to stand out from the German aircraft in all the chaos overhead France, all Allied aircraft received black and white stripes on their wings and tail. Such was the case for 349's Spitfires as well. At 2:50pm, 349's Spitfires are the first ones to meet the Luftwaffe overhead Normandy, killing several enemy aircraft before heading back to RAF Selsey, their base in Great Britain. Amongst the squadron's pilots was the young Flight Sergeant Joseph "Jeff" Moureau. Flying dozens of sorties during the liberation of Europe, Joseph Moureau became, together with his colleagues, a true hero and D-Day veteran. In the year of the 75th anniversary of the D-Day landings, in honour of the now 97-year-old Flight Sergeant Joseph "Jeff" Moureau, 349's oldest surviving D-Day veteran, 349 Belgian Squadron adapted Jeff's original D-Day markings: GE-S, combined with the black and white invasion stripes on wings and tail.