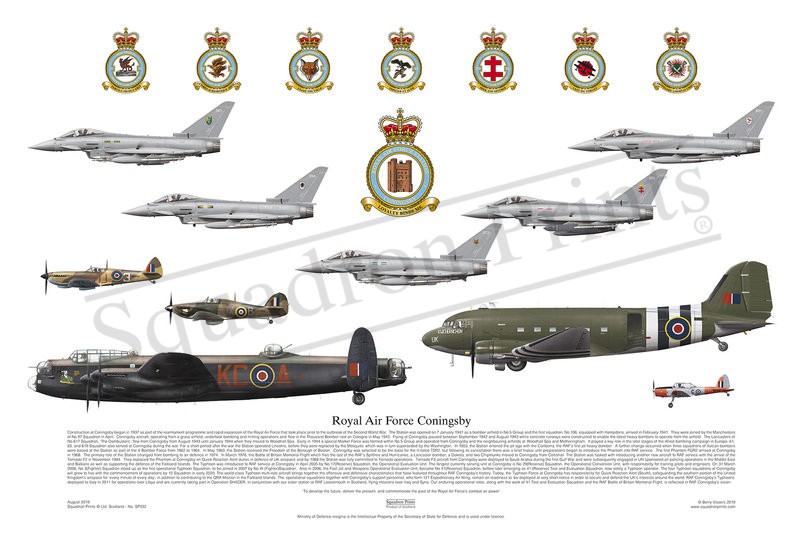 Construction at Coningsby began in 1937 as part of the rearmament programme and rapid expansion of the Royal Air Force that took place prior to the outbreak of the Second World War. The Station was opened on 7 January 1941 as a bomber airfield in No 5 Group and the first squadron, No 106, equipped with Hampdens, arrived in February 1941. They were joined by the Manchesters of No 97 Squadron in April. Coningsby aircraft, operating from a grass airfield, undertook bombing and mining operations and flew in the Thousand Bomber raid on Cologne in May 1942. Flying at Coningsby paused between September 1942 and August 1943 while concrete runways were constructed to enable the latest heavy bombers to operate from the airfield. The Lancasters of No 617 Squadron, ‘The Dambusters’, flew from Coningsby from August 1943 until January 1944 when they moved to Woodhall Spa. Early in 1944 a special Marker Force was formed within No 5 Group and operated from Coningsby and the neighbouring airfields at Woodhall Spa and Metheringham. It played a key role in the later stages of the Allied bombing campaign in Europe. 61, 83, and 619 Squadron also served at Coningsby during the war. For a short period after the war the Station operated Lincolns, before they were replaced by the Mosquito, which was in turn superseded by the Washington. In 1953, the Station entered the jet age with the Canberra, the RAF’s first jet heavy bomber. A further change occurred when three squadrons of Vulcan bombers were based at the Station as part of the V Bomber Force from 1962 to 1964. In May 1963, the Station received the Freedom of the Borough of Boston. Coningsby was selected to be the base for the ill-fated TSR2, but following its cancellation there was a brief hiatus until preparations began to introduce the Phantom into RAF service. The first Phantom FGR2 arrived at Coningsby in 1968. The primary role of the Station changed from bombing to air defence in 1974. In March 1976, the Battle of Britain Memorial Flight which flies the last of the RAF’s Spitfires and Hurricanes, a Lancaster bomber, a Dakota, and two Chipmunks moved to Coningsby from Coltishall. The Station was tasked with introducing another new aircraft to RAF service with the arrival of the Tornado F2 in November 1984. They replaced the Phantom at Coningsby on Quick Reaction Alert duties in defence of UK airspace and by 1988 the Station was fully committed to Tornado operations. Tornado F3 aircraft from Coningsby were deployed to Saudi Arabia during the first Gulf War and were subsequently engaged in UN sponsored air policing operations in the Middle East and Balkans as well as supporting the defence of the Falkland Islands. The Typhoon was introduced to RAF service at Coningsby in April 2005 by No 17(Reserve) Squadron, the Operational Evaluation Unit. The longest currently serving unit at Coningsby is No 29(Reserve) Squadron, the Operational Conversion Unit, with responsibility for training pilots and engineers. On 31 March 2006, No 3(Fighter) Squadron stood up as the first operational Typhoon Squadron, to be joined in 2007 by No XI (Fighter)Squadron. Also in 2006, the Fast Jet and Weapons Operational Evaluation Unit, became No 41(Reserve) Squadron, before later emerging as 41 (Reserve) Test and Evaluation Squadron, now solely a Typhoon operator. The four Typhoon squadrons at Coningsby will grow to five with the commencement of operations by 12 Squadron in early 2020. The world-class Typhoon multi-role aircraft brings together the offensive and defensive characteristics that have featured throughout RAF Coningsby’s history. Today, the Typhoon Force at Coningsby has responsibility for Quick Reaction Alert (South), safeguarding the southern portion of the United Kingdom’s airspace for ‘every minute of every day’, in addition to contributing to the QRA Mission in the Falkland Islands. The operational squadrons together with Coningsby’s support personnel, who form 121 Expeditionary Air Wing, remain on readiness to be deployed at very short notice in order to secure and defend the UK’s interests around the world. RAF Coningsby’s Typhoons deployed to Italy in 2011 for operations over Libya and are currently taking part in Operation SHADER, in conjunction with our sister station at RAF Lossiemouth in Scotland, flying missions over Iraq and Syria. Our enduring operational roles, along with the work of 41 Test and Evaluation Squadron and the RAF Battle of Britain Memorial Flight, is reflected in RAF Coningsby’s vision:

‘To develop the future, deliver the present, and commemorate the past of the Royal Air Force’s combat air power’