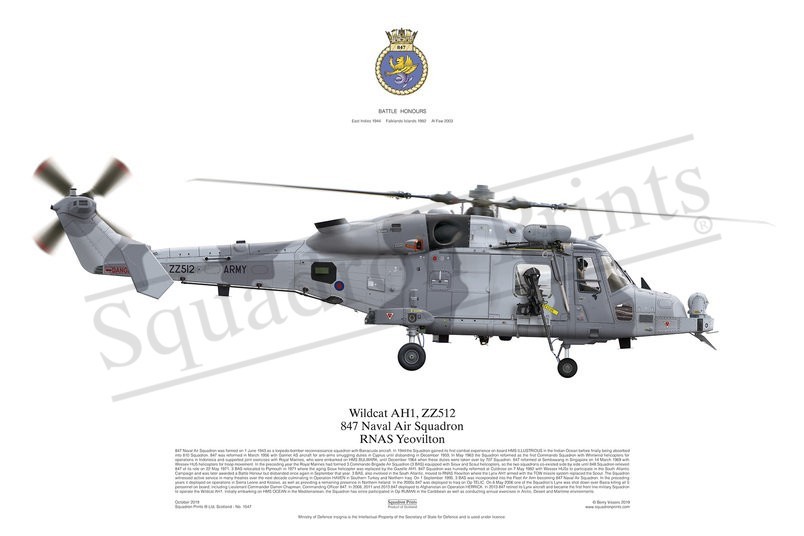 847 Naval Air Squadron was formed on 1 June 1943 as a torpedo-bomber reconnaissance squadron with Barracuda aircraft. In 1944 the Squadron gained its first combat experience on board HMS ILLUSTRIOUS in the Indian Ocean before finally being absorbed into 810 Squadron. 847 was reformed in March 1956 with Gannet AS aircraft for anti-arms smuggling duties in Cyprus until disbanding in December 1959. In May 1963 the Squadron reformed as the first Commando Squadron with Whirlwind helicopters for operations in Indonesia and supported joint exercises with Royal Marines, who were embarked on HMS BULWARK, until December 1964 when these duties were taken over by 707 Squadron. 847 reformed at Sembawang in Singapore on 14 March 1969 with Wessex HU5 helicopters for troop movement. In the preceding year the Royal Marines had formed 3 Commando Brigade Air Squadron (3 BAS) equipped with Sioux and Scout helicopters, so the two squadrons co-existed side by side until 848 Squadron relieved 847 of its role on 22 May 1971. 3 BAS relocated to Plymouth in 1971 where the aging Sioux helicopter was replaced by the Gazelle AH1. 847 Squadron was hurriedly reformed at Culdrose on 7 May 1982 with Wessex HU5s to participate in the South Atlantic Campaign and was later awarded a Battle Honour but disbanded once again in September that year. 3 BAS, also involved in the South Atlantic, moved to RNAS Yeovilton where the Lynx AH1 armed with the TOW missile system replaced the Scout. The Squadron witnessed active service in many theatres over the next decade culminating in Operation HAVEN in Southern Turkey and Northern Iraq. On 1 September 1995, 3 BAS was incorporated into the Fleet Air Arm becoming 847 Naval Air Squadron. In the preceding years it deployed on operations in Sierra Leone and Kosovo, as well as providing a remaining presence in Northern Ireland. In the 2000s 847 was deployed to Iraq on Op TELIC. On 6 May 2006 one of the Squadron’s Lynx was shot down over Basra killing all 5 personnel on board, including Lieutenant Commander Darren Chapman, Commanding Officer 847. In 2008, 2011 and 2013 847 deployed to Afghanistan on Operation HERRICK. In 2013 847 retired its Lynx aircraft and became the first front line military Squadron to operate the Wildcat AH1. Initially embarking on HMS OCEAN in the Mediterranean, the Squadron has since participated in Op RUMAN in the Caribbean as well as conducting annual exercises in Arctic, Desert and Maritime environments.