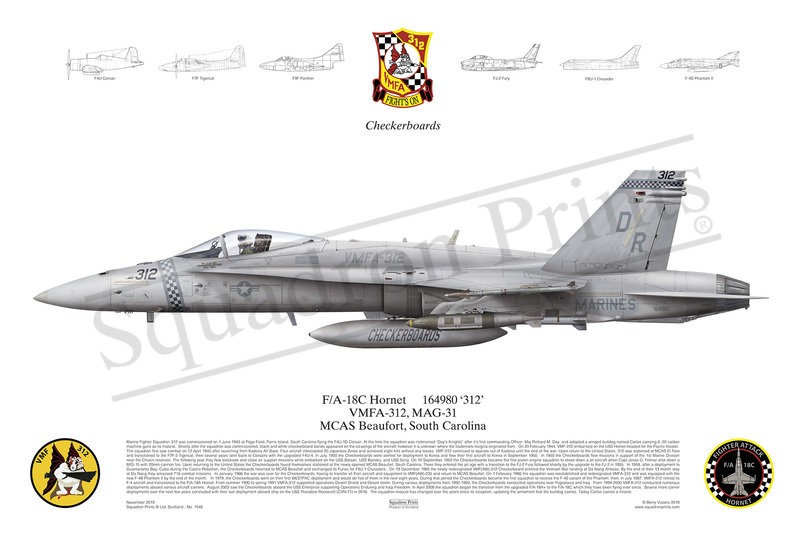 Marine Fighter Squadron 312 was commissioned on 1 June 1943 at Page Field, Parris Island, South Carolina flying the F4U-1D Corsair. At the time the squadron was nicknamed “Day’s Knights” after it’s first commanding Officer, Maj Richard M. Day, and adopted a winged bulldog named Carlos carrying 6 .50 caliber machine guns as its mascot. Shortly after the squadron was commissioned, black and white checkerboard bands appeared on the cowlings of the aircraft, however it is unknown where the trademark insignia originated from. On 20 February 1944, VMF-312 embarked on the USS Hornet headed for the Pacific theater. The squadron first saw combat on 12 April 1945 after launching from Kadena Air Base. Four aircraft intercepted 20 Japanese Zeros and achieved eight kills without any losses. VMF-312 continued to operate out of Kadena until the end of the war. Upon return to the United States, 312 was stationed at MCAS El Toro and transitioned to the F7F-3 Tigercat, then several years later back to Corsairs with the upgraded F4U-4. In July 1950 the Checkerboards were alerted for deployment to Korea and flew their first aircraft to Korea in September 1950. In 1950 the Checkerboards flew missions in support of the 1st Marine Division near the Chosin reservoir. The following year they flew blockade and close air support missions while embarked on the USS Bataan, USS Bairoku, and USS Sicily. On 10 September 1952 the Checkerboards became the first piston engine squadron to shoot down a jet aircraft when Capt Jesse G. Folmar shot down a MIG-15 with 20mm cannon fire. Upon returning to the United States the Checkerboards found themselves stationed at the newly opened MCAS Beaufort, South Carolina. There they entered the jet age with a transition to the FJ-2 Fury followed shortly by the upgrade to the FJ-3 in 1955. In 1959, after a deployment to Guantanamo Bay, Cuba during the Castro Rebellion, the Checkerboards returned to MCAS Beaufort and exchanged its Furies for F8U-1 Crusaders. On 19 December 1965 the newly redesignated VMF(AW)-312 Checkerboard entered the Vietnam War landing at Da Nang Airbase. By the end of their 13 month stay at Da Nang they amassed 718 combat missions. In January 1966 the war was over for the Checkerboards, having to transfer all their aircraft and equipment to VMF(AW)-235 and return to MCAS Beaufort. On 1 February 1966 the squadron was reestablished and redesignated VMFA-312 and was equipped with the new F-4B Phantom II by the end of the month. In 1979, the Checkerboards went on their first WESTPAC deployment and would do five of them in the next eight years. During that period the Checkerboards became the first squadron to receive the F-4S variant of the Phantom, then, in July 1987, VMFA-312 retired its F-4 aircraft and transitioned to the F/A-18A Hornet. From summer 1990 to spring 1991 VMFA-312 supported operations Desert Shield and Desert storm. During various deployments from 1992-1994, the Checkerboards conducted operations over Yugoslavia and Iraq. From 1994-2000 VMFA-312 conducted numerous deployments aboard various aircraft carriers. August 2003 saw the Checkerboards aboard the USS Enterprise supporting Operations Enduring and Iraqi Freedom. In April 2008 the squadron began the transition from the upgraded F/A-18A+ to the F/A-18C which they have been flying ever since. Several more carrier deployments over the next few years concluded with their last deployment aboard ship on the USS Theodore Roosevelt (CVN-71) in 2018. The squadron mascot has changed over the years since its inception, updating the armament that the bulldog carries. Today Carlos carries a missile.