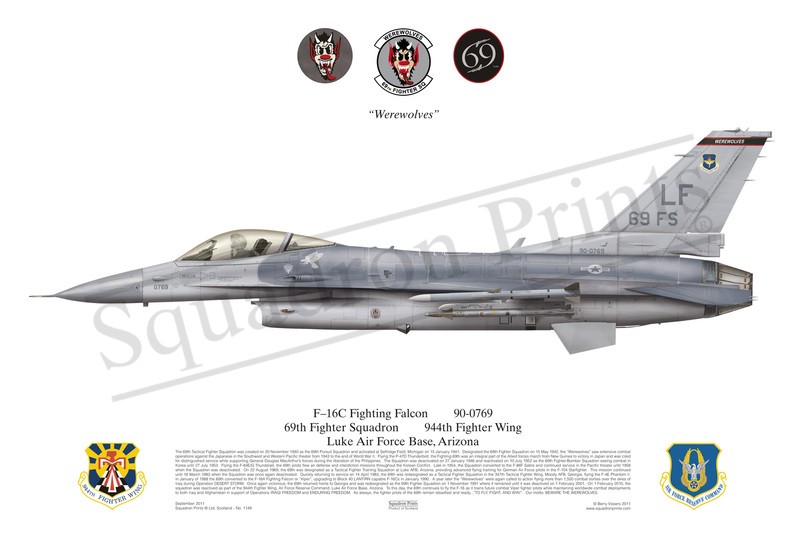 Squadron Prints Lithograph No. 1149 - F-16C Fighting Falcon, 90-0769, 69th Fighter Squadron, 944th Fighter Wing, Luke Air Force Base, Arizona. The 69th Tactical Fighter Squadron was created on 20 November 1940 as the 69th Pursuit Squadron and activated at Selfridge Field, Michigan on 15 January 1941. Designated the 69th Fighter Squadron on 15 May 1942, the “Werewolves” saw extensive combat operations against the Japanese in the Southwest and Western Pacific theater from 1943 to the end of World War II. Flying the P-47D Thunderbolt, the Fighting 69th was an integral part of the Allied forces march from New Guinea to victory in Japan and was cited for distinguished service while supporting General Douglas MacArthur’s forces during the liberation of the Philippines. The Squadron was deactivated on 27 January 1946 and reactivated on 10 July 1952 as the 69th Fighter-Bomber Squadron seeing combat in Korea until 27 July 1953. Flying the F-84E/G Thunderjet, the 69th pilots flew air defense and interdiction missions throughout the Korean Conflict. Late in 1954, the Squadron converted to the F-86F Sabre and continued service in the Pacific theater until 1958 when the Squadron was deactivated. On 22 August 1969, the 69th was designated as a Tactical Fighter Training Squadron at Luke AFB, Arizona, providing advanced flying training for German Air Force pilots in the F-104 Starfighter. This mission continued until 16 March 1983 when the Squadron was once again deactivated. Quickly returning to service on 14 April 1983, the 69th was redesignated as a Tactical Fighter Squadron in the 347th Tactical Fighter Wing, Moody AFB, Georgia, flying the F-4E Phantom II. In January of 1988 the 69th converted to the F-16A Fighting Falcon or “Viper”, upgrading to Block 40 LANTIRN capable F-16Cs in January 1990. A year later the “Werewolves” were again called to action flying more than 1,500 combat sorties over the skies of Iraq during Operation DESERT STORM. Once again victorious, the 69th returned home to Georgia and was redesignated as the 69th Fighter Squadron on 1 November 1991 where it remained until it was deactived on 1 February 2001. On 1 February 2010, the squadron was reactived as part of the 944th Fighter Wing, Air Force Reserve Command, Luke Air Force Base, Arizona. To this day, the 69th continues to fly the F-16 as it trains future combat Viper fighter pilots while maintaining worldwide combat deployments to both Iraq and Afghanistan in support of Operations IRAQI FREEDOM and ENDURING FREEDOM. As always, the fighter pilots of the 69th remain steadfast and ready...”TO FLY, FIGHT, AND WIN!”. Our motto: BEWARE THE WEREWOLVES.