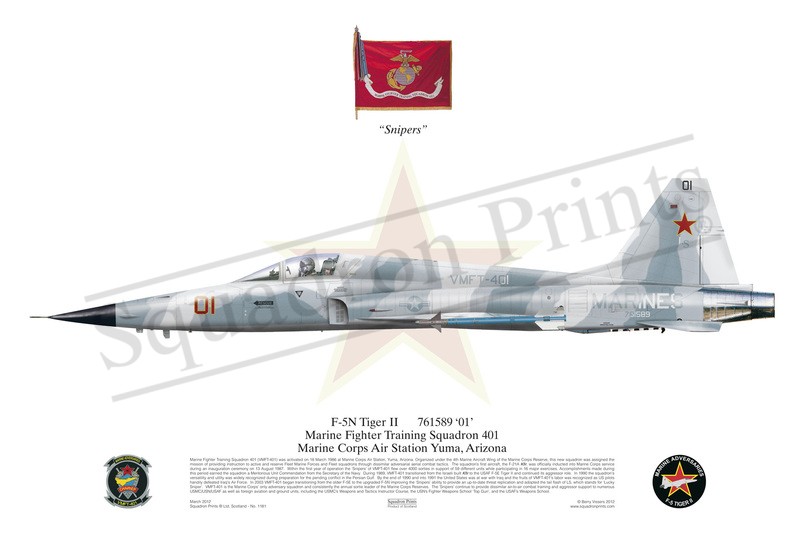 Squadron Prints Lithograph No. 1181 - F-5N Tiger II, 761589 \'01\', VMFT-101, MCAS Yuma, Arizona. Marine Fighter Training Squadron 401 (VMFT-401) was activated on 18 March 1986 at Marine Corps Air Station, Yuma, Arizona. Organized under the 4th Marine Aircraft Wing of the Marine Corps Reserve, this new squadron was assigned the mission of providing instruction to active and reserve Fleet Marine Forces and Fleet squadrons through dissimilar adversarial aerial combat tactics. The squadron\'s first aircraft, the F-21A Kfir, was officially inducted into Marine Corps service during an inauguration ceremony on 13 August 1987. Within the first year of operation the \'Snipers\' of VMFT-401 flew over 4000 sorties in support of 59 different units while participating in 16 major exercises. Accomplishments made during this period earned the squadron a Meritorious Unit Commendation from the Secretary of the Navy. During 1989, VMFT-401 transitioned from the Israeli built Kfir to the USAF F-5E Tiger II and continued its aggressor role. In 1990 the squadron\'s versatility and utility was widely recognized during preparation for the pending conflict in the Persian Gulf. By the end of 1990 and into 1991 the United States was at war with Iraq and the fruits of VMFT-401\'s labor was recognized as US pilots handily defeated Iraq\'s Air Force. In 2003 VMFT-401 began transitioning from the older F-5E to the upgraded F-5N improving the \'Snipers\' ability to provide an up-to-date threat replication and adopted the tail flash of LS, which stands for \'Lucky Sniper\'. VMFT-401 is the Marine Corps\' only adversary squadron and consistently the annual sortie leader of the Marine Corps Reserves. The \'Snipers\' continue to provide dissimilar air-to-air combat training and aggressor support to numerous USMC/USN/USAF as well as foreign aviation and ground units, including the USMC\'s Weapons and Tactics Instructor Course, the USN\'s Fighter Weapons School \'Top Gun\', and the USAF\'s Weapons School.