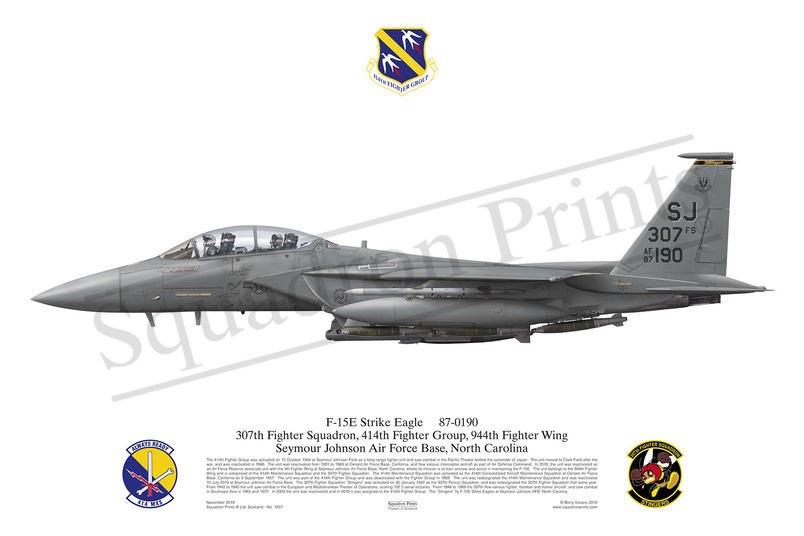 The 414th Fighter Group was activated on 15 October 1944 at Seymour Johnson Field as a long range fighter unit and saw combat in the Pacific Theater before the surrender of Japan. The unit moved to Clark Field after the war, and was inactivated in 1946. The unit was reactivated from 1955 to 1969 at Oxnard Air Force Base, California, and flew various interceptor aircraft as part of Air Defense Command. In 2010, the unit was reactivated as an Air Force Reserve associate unit with the 4th Fighter Wing at Seymour Johnson Air Force Base, North Carolina, where its mission is to train aircrew and assist in maintaining the F-15E. The unit belongs to the 944th Fighter Wing and is comprised of the 414th Maintenance Squadron and the 307th Fighter Squadron. The 414th Maintenance Squadron was activated as the 414th Consolidated Aircraft Maintenance Squadron at Oxnard Air Force Base, California on 8 September 1957. The unit was part of the 414th Fighter Group and was deactivated with the Fighter Group in 1969. The unit was redesignated the 414th Maintenance Squadron and was reactivated 15 July 2010 at Seymour Johnson Air Force Base. The 307th Fighter Squadron “Stingers” was activated on 30 January 1942 as the 307th Pursuit Squadron, and was redesignated the 307th Fighter Squadron that same year. From 1942 to 1945 the unit saw combat in the European and Mediterranean Theater of Operations, scoring 192.5 aerial victories. From 1946 to 1989 the 307th flew various fighter, bomber and trainer aircraft, and saw combat in Southeast Asia in 1965 and 1972. In 2003 the unit was reactivated and in 2010 it was assigned to the 414th Fighter Group. The “Stingers” fly F-15E Strike Eagles at Seymour Johnson AFB, North Carolina.