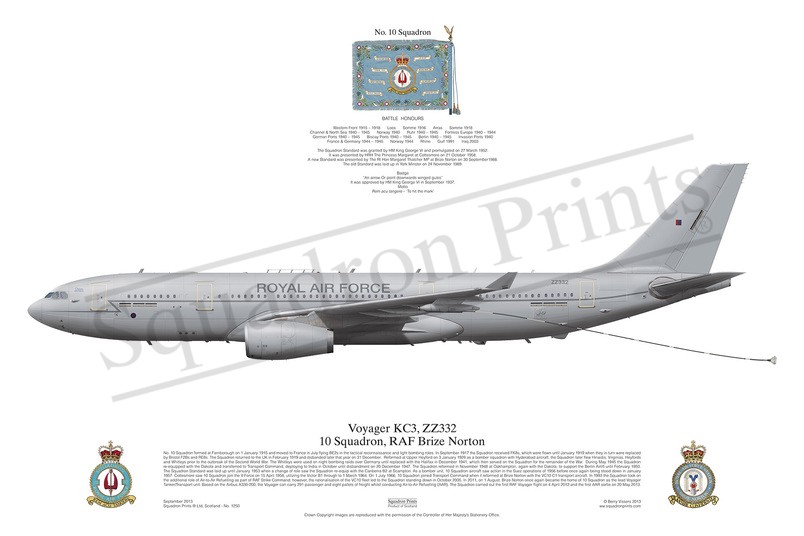 Squadron Prints Lithograph No. 1250 - Voyager KC3, ZZ332, 10 Squadron, RAF Brize Norton. No. 10 Squadron formed at Farnborough on 1 January 1915 and moved to France in July flying BE2s in the tactical reconnaissance and light bombing roles. In September 1917 the Squadron received FK8s, which were flown until January 1919 when they in turn were replaced by Bristol F2Bs and RE8s. The Squadron returned to the UK in February 1919 and disbanded later that year on 31 December. Reformed at Upper Heyford on 3 January 1928 as a bomber squadron with Hyderabad aircraft, the Squadron later flew Hinaidis, Virginias, Heyfords and Whitleys prior to the outbreak of the Second World War. The Whitleys were used on night bombing raids over Germany until replaced with the Halifax in December 1941, which then served on the Squadron for the remainder of the War. During May 1945 the Squadron re-equipped with the Dakota and transferred to Transport Command, deploying to India in October until disbandment on 20 December 1947. The Squadron reformed in November 1948 at Oakhampton, again with the Dakota, to support the Berlin Airlift until February 1950. The Squadron Standard was laid up until January 1953 when a change of role saw the Squadron re-equip with the Canberra B2 at Scampton. As a bomber unit, 10 Squadron aircraft saw action in the Suez operations of 1956 before once again being stood down in January 1957. Cottesmore saw 10 Squadron join the V-Force on 15 April 1958, utilizing the Victor B1 through to 1 March 1964. On 1 July 1966, 10 Squadron joined Transport Command when it reformed at Brize Norton with the VC10 C1 transport aircraft. In 1993 the Squadron took on the additional role of Air-to-Air Refuelling as part of RAF Strike Command; however, the rationalisation of the VC10 fleet led to the Squadron standing down in October 2005. In 2011, on 1 August, Brize Norton once again became the home of 10 Squadron as the lead Voyager Tanker/Transport unit. Based on the Airbus A330-200, the Voyager can carry 291 passenger and eight pallets of freight whilst conducting Air-to-Air Refuelling (AAR). The Squadron carried out the first RAF Voyager flight on 4 April 2012 and the first AAR sortie on 20 May 2013.