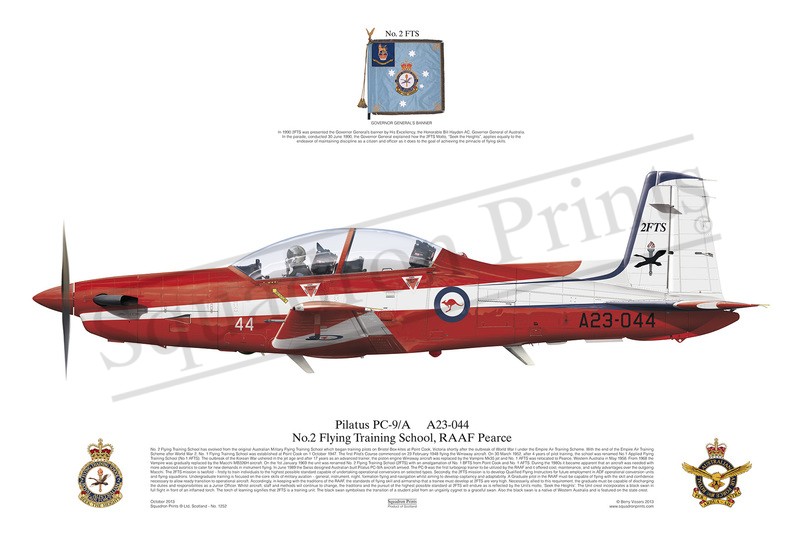 Squadron Prints Lithograph No 1252 - Pilatus PC-9/A, A23-044, No. 2 Flying Training School, RAAF Pearce. No. 2 Flying Training School has evolved from the original Australian Military Flying Training School which began training pilots on Bristol Box-kites at Point Cook, Victoria shortly after the outbreak of World War I under the Empire Air Training Scheme. With the end of the Empire Air Training Scheme after World War 2, No. 1 Flying Training School was established at Point Cook on 1 October 1947. The first Pilot’s Course commenced on 23 February 1948 flying the Wirraway aircraft. On 30 March 1952, after 4 years of pilot training, the school was renamed No.1 Applied Flying Training School (No.1 AFTS). The outbreak of the Korean War ushered in the jet age and after 17 years as an advanced trainer, the piston engine Wirraway aircraft was replaced by the Vampire Mk35 jet and No. 1 AFTS was relocated to Pearce, Western Australia in May 1958. From 1968 the Vampire was gradually replaced by the Macchi MB326H aircraft. On the 1st January 1969 the unit was renamed No. 2 Flying Training School (2FTS) with an amalgamation of No. 1 BFTS from Point Cook and No. 1 AFTS. During the 1980s it became apparent that an aircraft was needed with more advanced avionics to cater for new demands in instrument flying. In June 1989 the Swiss designed Australian built Pilatus PC-9/A aircraft arrived. The PC-9 was the first turboprop trainer to be utilized by the RAAF and it offered cost, maintenance, and safety advantages over the outgoing Macchi. The 2FTS mission is twofold – firstly to train individuals to the highest possible standard capable of undertaking operational conversions on selected types. Secondly, the 2FTS mission is to develop Qualified Flying Instructors for future employment in ADF operational conversion units and flying squadrons. Undergraduate training is focused on the core skills of military aviation – general, instrument, night, formation flying and navigation whilst aiming to develop captaincy and adaptability. A Graduate pilot in the RAAF must be capable of flying with the skill and confidence necessary to allow ready transition to operational aircraft. Accordingly, in keeping with the traditions of the RAAF, the standards of flying skill and airmanship that a trainee must develop at 2FTS are very high. Necessarily allied to this requirement, the graduate must be capable of discharging the duties and responsibilities as a Junior Officer. Whilst aircraft, staff and methods will continue to change, the traditions and the pursuit of the highest possible standard at 2FTS will endure as is reflected by the Unit’s motto, ‘Seek the Heights’. The Unit crest incorporates a black swan in full flight in front of an inflamed torch. The torch of learning signifies that 2FTS is a training unit. The black swan symbolises the transition of a student pilot from an ungainly cygnet to a graceful swan. Also the black swan is a native of Western Australia and is featured on the state crest.