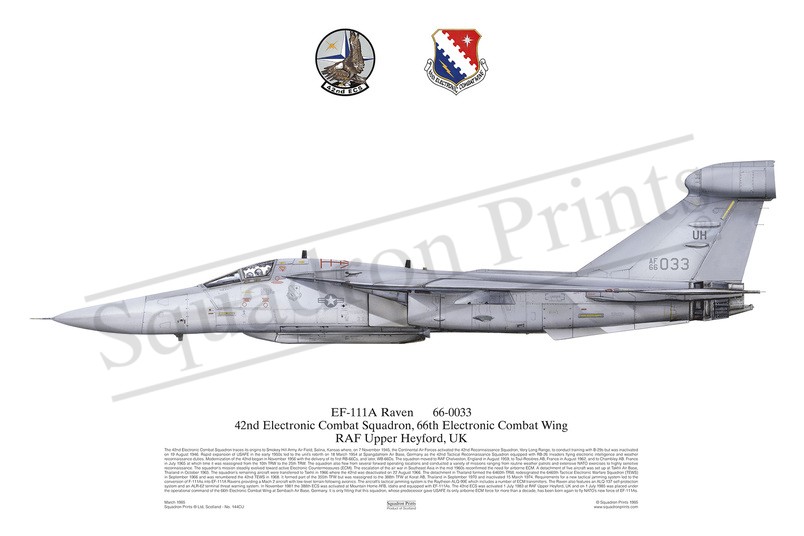 Squadron Prints Lithograph No. 144CU - EF-111A Raven, 66-0033, 42nd Electronic Combat Squadron, 66th Electronic Combat Wing, RAF Upper Heyford, UK. The 42nd Electronic Combat Squadron traces its origins to Smokey Hill Army Air Field, Salina, Kansas where, on 7 November 1945, the Continental Air Forces activated the 42nd Reconnaissance Squadron, Very Long Range, to conduct training with B-29s but was inactivated on 19 August 1946. Rapid expansion of USAFE in the early 1950s led to the unit’s rebirth on 18 March 1954 at Spangdahlem Air Base, Germany as the 42nd Tactical Reconnaissance Squadron equipped with RB-26 Invaders flying electronic intelligence and weather reconnaissance duties. Modernization of the 42nd began in November 1956 with the delivery of its first RB-66Cs, and later, WB-66Ds. The squadron moved to RAF Chelveston, England in August 1959, to Toul-Rosières AB, France in August 1962, and to Chambley AB. France in July 1965 at which time it was reassigned from the 10th TRW to the 25th TRW. The squadron also flew from several forward operating locations and conducted a variety of missions ranging from routine weather patrols and extensive NATO exercises to highly sensitive reconnaissance. The squadron’s mission steadily evolved toward active Electronic Countermeasures (ECM). The escalation of the air war in Southeast Asia in the mid 1960s reconfirmed the need for airborne ECM. A detachment of five aircraft was set up at Takhli Air Base, Thailand in October 1965. The squadron’s remaining aircraft were transferred to Takhli in 1966 where the 42nd was deactivated on 22 August 1966. The detachment in Thailand formed the 6460th TRW, redesignated the 6460th Tactical Electronic Warfare Squadron (TEWS) in September 1966 and was renumbered the 42nd TEWS in 1968. It formed part of the 355th TFW but was reassigned to the 388th TFW at Korat AB, Thailand in September 1970 and inactivated 15 March 1974. Requirements for a new tactical jamming system led to the conversion of F-111As into EF-111A Ravens providing a Mach 2 aircraft with low-level terrain-following avionics. The aircraft’s tactical jamming system is the Raytheon ALQ-99E which includes a number of ECM transmitters. The Raven also features an ALQ-137 self-protection system and an ALR-62 terminal threat warning system. In November 1981 the 388th ECS was activated at Mountain Home AFB, ldaho and equipped with EF-111As. The 42nd ECS was activated 1 July 1983 at RAF Upper Heyford, UK and on 1 July 1985 was placed under the operational command of the 66th Electronic Combat Wing at Sembach Air Base, Germany. It is only fitting that this squadron, whose predecessor gave USAFE its only airborne ECM force for more than a decade, has been born again to fly NATO’s new force of EF-111As.