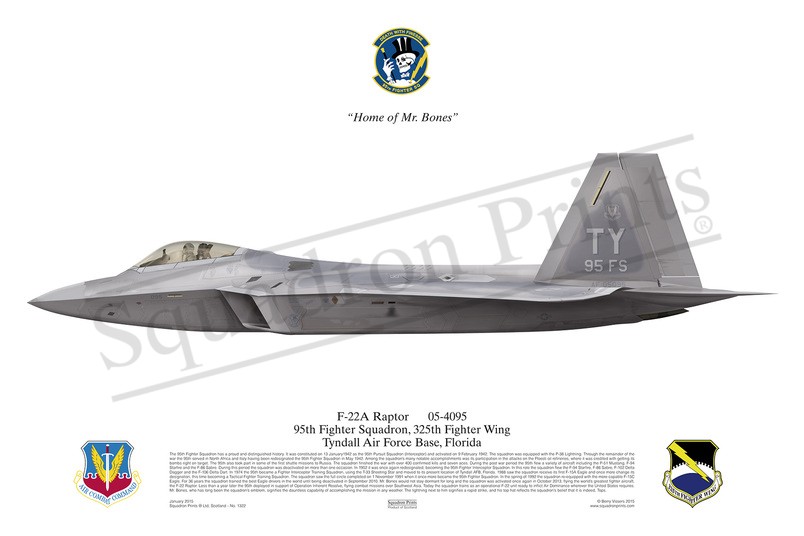 Squadron Print Lithograph No. 1322 - 09-4095 '95 FS', F-22A Raptor, 95th FS, 325th FW, Tyndall AFB, Florida. The 95th Fighter Squadron has a proud and distinguished history. It was constituted on 13 January1942 as the 95th Pursuit Squadron (Interceptor) and activated on 9 February 1942. The squadron was equipped with the P-38 Lightning. Through the remainder of the war the 95th served in North Africa and Italy having been redesignated the 95th Fighter Squadron in May 1942. Among the squadron’s many notable accomplishments was its participation in the attacks on the Ploesti oil refineries, where it was credited with getting its bombs right on target. The 95th also took part in some of the first shuttle missions to Russia. The squadron finished the war with over 400 confirmed kills and seven aces. During the post war period the 95th flew a variety of aircraft including the P-51 Mustang, F-94 Starfire and the F-86 Sabre. During this period the squadron was deactivated on more than one occasion. In 1952 it was once again redesignated, becoming the 95th Fighter Interceptor Squadron. In this role the squadron flew the F-94 Starfire, F-86 Sabre, F-102 Delta Dagger and the F-106 Delta Dart. In 1974 the 95th became a Fighter Interceptor Training Squadron, using the T-33 Shooting Star and moved to its present location of Tyndall AFB, Florida. 1988 saw the squadron receive its first F-15A Eagle and once more change its designation, this time becoming a Tactical Fighter Training Squadron. The squadron saw the full circle completed on 1 November 1991 when it once more became the 95th Fighter Squadron. In the spring of 1992 the squadron re-equipped with the more capable F-15C Eagle. For 36 years the squadron trained the best Eagle drivers in the world until being deactivated in September 2010. Mr. Bones would not stay dormant for long and the squadron was activated once again in October 2013, flying the world’s greatest fighter aircraft, the F-22 Raptor. Less than a year later the 95th deployed in support of Operation Inherent Resolve, flying combat missions over Southwest Asia. Today the squadron trains as an operational F-22 unit ready to inflict Air Dominance wherever the United States requires. Mr. Bones, who has long been the squadron’s emblem, signifies the dauntless capability of accomplishing the mission in any weather. The lightning next to him signifies a rapid strike, and his top hat reflects the squadron’s belief that it is indeed, Tops.