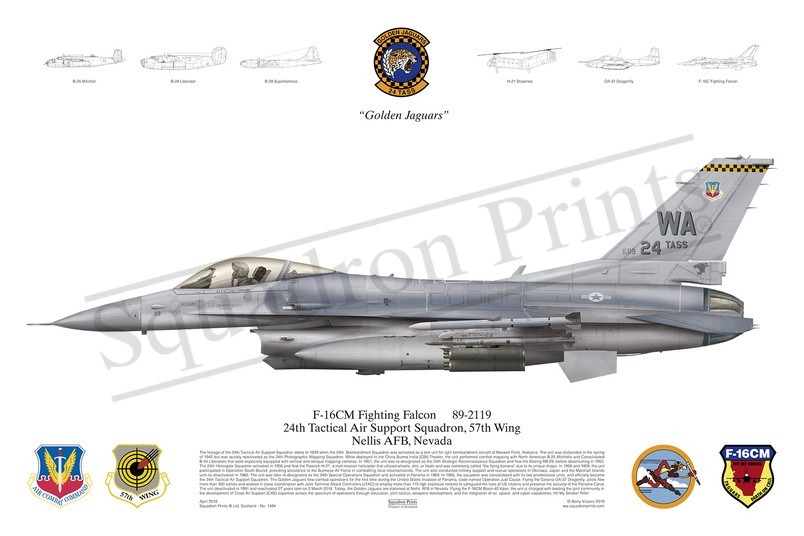 Squadron Prints Lithograph No. 1494 - 89-2119, F-16C Fighting Falcon, 24th Tactical Air Support Squadron, 57th Wing, Nellis AFB, Nevada. Â­Â­Â­Â­Â­Â­Â­Â­The lineage of the 24th Tactical Air Support Squadron dates to 1939 when the 24th Bombardment Squadron was activated as a test unit for light bombardment aircraft at Maxwell Field, Alabama. The unit was disbanded in the spring of 1942 but was quickly reactivated as the 24th Photographic Mapping Squadron. While deployed to the China Burma India (CBI) Theater, the unit performed combat mapping with North American B-25 Mitchells and Consolidated B-24 Liberators that were especially equipped with vertical and oblique mapping cameras. In 1951, the unit was re-designated as the 24th Strategic Reconnaissance Squadron and flew the Boeing RB-29, before deactivating in 1953. The 24th Helicopter Squadron activated in 1956 and flew the Piasecki H-21, a mult-mission helicopter that utilized wheels, skis, or floats and was commonly called â€œthe flying bananaâ€ due to its unique shape. In 1958 and 1959, the unit participated in Operation South Bound, providing assistance to the Burmese Air Force in combatting local insurrectionists. The unit also conducted military support and rescue operations in Okinawa, Japan and the Marshall Islands until its deactivation in 1960. The unit was later re-designated as the 24th Special Operations Squadron and activated in Panama in 1969. In 1985, the squadron was consolidated with its two predecessor units, and officially became the 24th Tactical Air Support Squadron. The Golden Jaguars flew combat operations for the first time during the United States Invasion of Panama, code named Operation Just Cause. Flying the Cessna OA-37 Dragonfly, pilots flew more than 300 sorties and worked in close coordination with Joint Terminal Attack Controllers (JTAC) to employ more than 115 high explosive rockets to safeguard the lives of US citizens and preserve the security of the Panama Canal. The unit deactivated in 1991 and reactivated 27 years later on 2 March 2018. Today, the Golden Jaguars are stationed at Nellis AFB in Nevada. Flying the F-16CM Block-40 Viper, the unit is charged with leading the joint community in the development of Close Air Support (CAS) expertise across the spectrum of operations through education, joint tactics, weapons development, and the integration of air, space, and cyber capabilities. Hit My Smoke! Rifle!