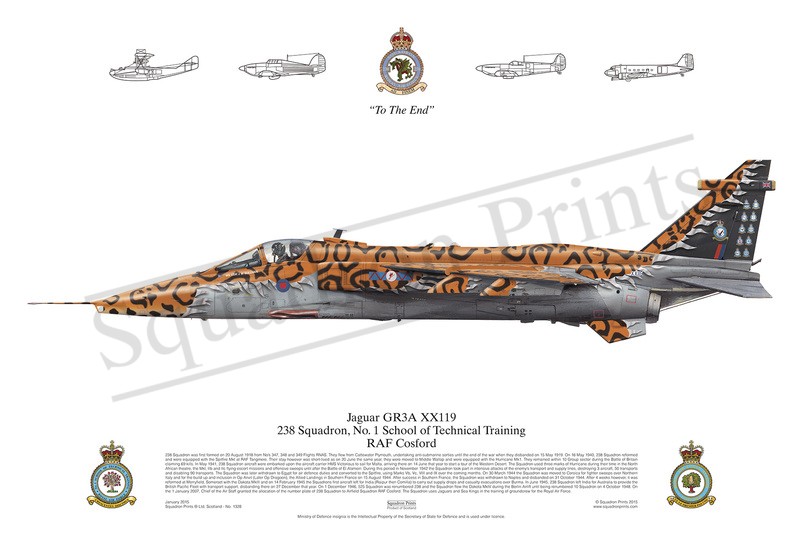 Squadron Prints Lithograph No. 1328 - Jaguar GR3A, XX119, 238 Squadron, No. 1 SoTT, RAF Cosford. 238 Squadron was first formed on 20 August 1918 from No’s 347, 348 and 349 Flights RNAS. They flew from Cattewater Plymouth, undertaking anti-submarine sorties until the end of the war when they disbanded on 15 May 1919. On 16 May 1940, 238 Squadron reformed and were equipped with the Spitfire MkI at RAF Tangmere. Their stay however was short-lived as on 20 June the same year, they were moved to Middle Wallop and were equipped with the Hurricane Mk1. They remained within 10 Group sector during the Battle of Britain claiming 69 kills. In May 1941, 238 Squadron aircraft were embarked upon the aircraft carrier HMS Victorious to sail for Malta, arriving there on 14 June that year to start a tour of the Western Desert. The Squadron used three marks of Hurricane during their time in the North African theatre, the MkI, IIb and IIc flying escort missions and offensive sweeps until after the Battle of El Alamein. During this period in November 1942 the Squadron took part in intensive attacks of the enemy’s transport and supply lines, destroying 3 aircraft, 50 transports and disabling 90 transports. The Squadron was later withdrawn to Egypt for air defence duties and converted to the Spitfire, using Marks Vb, Vc, VIII and IX over the coming months. On 30 March 1944 the Squadron was moved to Corsica for fighter sweeps over Northern Italy and for the build up and inclusion in Op Anvil (Later Op Dragoon), the Allied Landings in Southern France on 15 August 1944. After success in Southern France, the Squadron was withdrawn to Naples and disbanded on 31 October 1944. After 4 weeks however, it was reformed at Merryfield, Somerset with the Dakota MkIII and on 14 February 1945 the Squadrons first aircraft left for India (Raipur then Comilla) to carry out supply drops and casualty evacuations over Burma. In June 1945, 238 Squadron left India for Australia to provide the British Pacific Fleet with transport support, disbanding there on 27 December that year. On 1 December 1946, 525 Squadron was renumbered 238 and the Squadron flew the Dakota MkIV during the Berlin Airlift until being renumbered 10 Squadron on 4 October 1948. On the 1 January 2007, Chief of the Air Staff granted the allocation of the number plate of 238 Squadron to Airfield Squadron RAF Cosford. The Squadron uses Jaguars and Sea Kings in the training of groundcrew for the Royal Air Force.