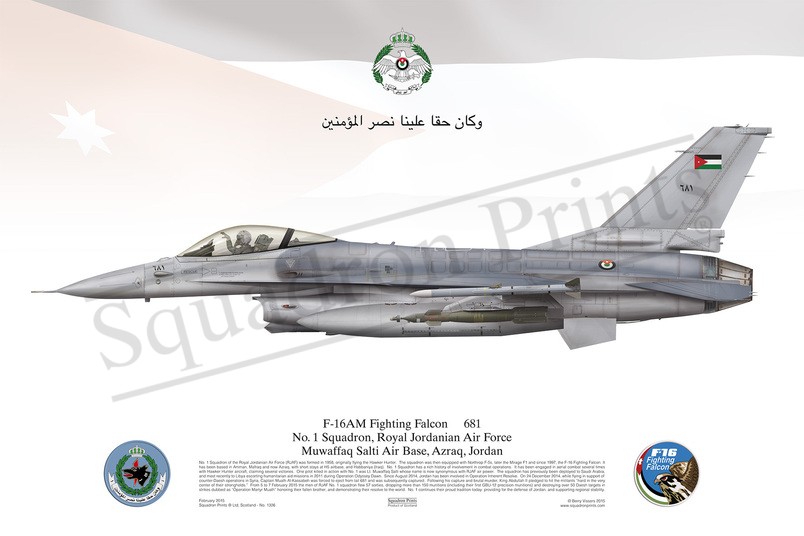 Squadron Prints Lithograph No. 1326 - 681, F-16AM Fighting Falcon, No. 1 Squadron Royal Jordanian Air Force, Muwaffaq Salti Air Base, Azraq, Jordan. No. 1 Squadron of the Royal Jordanian Air Force (RJAF) was formed in 1958, originally flying the Hawker Hunter. The squadron was then equipped with Northrop F-5s, later the Mirage F1 and since 1997, the F-16 Fighting Falcon. It has been based in Amman, Mafraq and now Azraq, with short stays at H5 airbase, and Habbaniya (Iraq). No. 1 Squadron has a rich history of involvement in combat operations. It has been engaged in aerial combat several times with Hawker Hunter aircraft, claiming several victories. One pilot killed in action with No. 1 was Lt. Muwaffaq Salti whose name is now synonymous with RJAF air power. The squadron has previously been deployed to Saudi Arabia, and most recently to Libya escorting humanitarian aid missions in 2011 during Operation Odyssey Dawn. Since August 2014, Jordan has been involved in Operation Inherent Resolve. On 24 December 2014, while flying in support of counter-Daesh operations in Syria, Captain Muath Al-Kassabeh was forced to eject from tail 681 and was subsequently captured and later murdered. From 5 to 7 February 2015 the men of RJAF No. 1 squadron flew 57 sorties, in strikes dubbed as “Operation Martyr Muath” honoring their fallen brother, and demonstrating their resolve to the world. No. 1 continues their proud tradition today: providing for the defense of Jordan, and supporting regional stability.