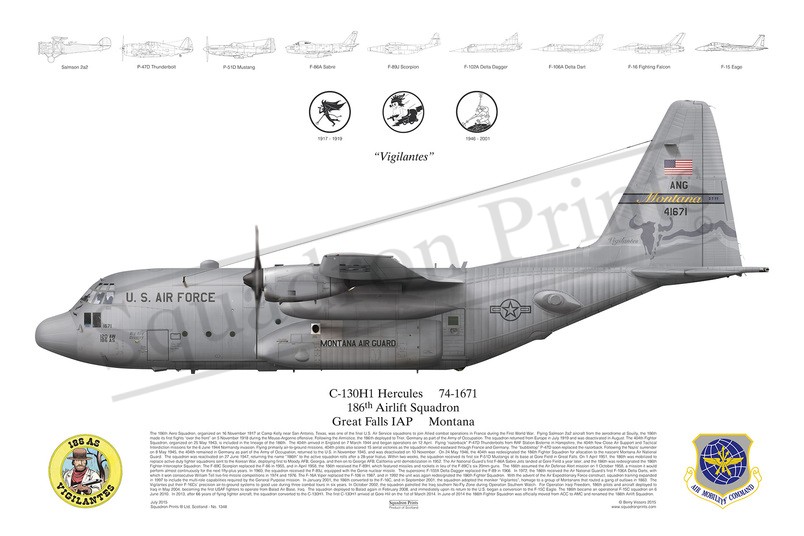 Squadron Prints Lithograph No. 1348 - 74-1671, C-130H Hercules, 186th Airlift Squadron, Great Falls IAP, Montana. The 186th Aero Squadron, organized on 16 November 1917 at Camp Kelly near San Antonio, Texas, was one of the final U.S. Air Service squadrons to join Allied combat operations in France during the First World War. Flying Salmson 2a2 aircraft from the aerodrome at Souilly, the 186th made its first flights “over the front” on 5 November 1918 during the Meuse-Argonne offensive. Following the Armistice, the 186th deployed to Trier, Germany as part of the Army of Occupation. The squadron returned from Europe in July 1919 and was deactivated in August. The 404th Fighter Squadron, organized on 25 May 1943, is included in the lineage of the 186th. The 404th arrived in England on 7 March 1944 and began operations on 12 April. Flying “razorback” P-47D Thunderbolts from RAF Station Bisterne in Hampshire, the 404th flew Close Air Support and Tactical Interdiction missions for the 6 June 1944 Normandy invasion. Flying primarily air-to-ground missions, 404th pilots also scored 15 aerial victories as the squadron moved eastward through France and Germany. The “bubbletop” P-47D soon replaced the razorback. Following the Nazis’ surrender on 8 May 1945, the 404th remained in Germany as part of the Army of Occupation, returned to the U.S. in November 1945, and was deactivated on 10 November. On 24 May 1946, the 404th was redesignated the 186th Fighter Squadron for allocation to the nascent Montana Air National Guard. The squadron was reactivated on 27 June 1947, returning the name “186th” to the active squadron rolls after a 28-year hiatus. Within two weeks, the squadron received its first six P-51D Mustangs at its base at Gore Field in Great Falls. On 1 April 1951, the 186th was mobilized to replace active duty fighter squadrons sent to the Korean War, deploying first to Moody AFB, Georgia, and then on to George AFB, California until demobilization in 1952. The Air National Guard’s first F-86A Sabre Jets landed at Gore Field a year later, and the 186th was redesignated the 186th Fighter-Interceptor Squadron. The F-89C Scorpion replaced the F-86 in 1955, and in April 1958, the 186th received the F-89H, which featured missiles and rockets in lieu of the F-89C’s six 20mm guns. The 186th assumed the Air Defense Alert mission on 1 October 1958, a mission it would perform almost continuously for the next fifty-plus years. In 1960, the squadron received the F-89J, equipped with the Genie nuclear missile. The supersonic F-102A Delta Dagger replaced the F-89 in 1966. In 1972, the 186th received the Air National Guard’s first F-106A Delta Darts, with which it won consecutive William Tell live-fire missile competitions in 1974 and 1976. The F-16A Viper replaced the F-106 in 1987, and in 1992 the unit was again redesignated the 186th Fighter Squadron. With the advent of the Air Expeditionary Force construct, squadron training expanded in 1997 to include the multi-role capabilities required by the General Purpose mission. In January 2001, the 186th converted to the F-16C, and in September 2001, the squadron adopted the moniker “Vigilantes”, homage to a group of Montanans that routed a gang of outlaws in 1863. The Vigilantes put their F-16Cs’ precision air-to-ground systems to good use during three combat tours in six years. In October 2002, the squadron patrolled the Iraq southern No-Fly Zone during Operation Southern Watch. For Operation Iraqi Freedom, 186th pilots and aircraft deployed to Iraq in May 2004, becoming the first USAF fighters to operate from Balad Air Base, Iraq. The squadron deployed to Balad again in February 2008, and immediately upon its return to the U.S. began a conversion to the F-15C Eagle. The 186th became an operational F-15C squadron on 6 June 2010. In 2013, after 66 years of flying fighter aircraft, the squadron converted to the C-130H1. The first C-130H1 arrived at Gore Hill on the 1st of March 2014. In June of 2014 the 186th Fighter Squadron was officially moved from ACC to AMC and renamed the 186th Airlift Squadron.