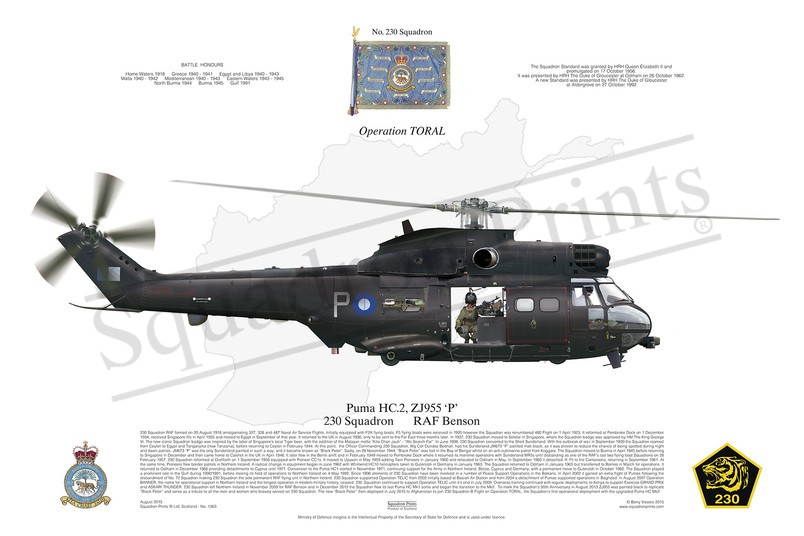 Squadron Prints Lithograph No. 1363 - ZJ955 'P', Puma HC2, 230 Squadron, RAF Benson, Operation TORAL. 230 Squadron RAF formed on 20 August 1918 amalgamating 327, 328 and 487 Naval Air Service Flights. Initially equipped with F2A flying boats, F5 flying boats were received in 1920 however the Squadron was renumbered 480 Flight on 1 April 1923. It reformed at Pembroke Dock on 1 December 1934, received Singapore IIIs in April 1935 and moved to Egypt in September of that year. It returned to the UK in August 1936, only to be sent to the Far East three months later. In 1937, 230 Squadron moved to Seletar in Singapore, where the Squadron badge was approved by HM The King George VI. The now iconic Squadron badge was inspired by the label of Singapore’s local Tiger beer, with the addition of the Malayan motto “Kita Chari Jauh” - “We Search Far”. In June 1938, 230 Squadron converted to the Short Sunderland. With the outbreak of war in September 1939 the Squadron roamed from Ceylon to Egypt and Tanganyika (now Tanzania), before returning to Ceylon in February 1944. At this point, the Officer Commanding 230 Squadron, Wg Cdr Dundas Bednall, had his Sunderland JM673 “P” painted matt black, as it was proven to reduce the chance of being spotted during night and dawn patrols. JM673 “P” was the only Sunderland painted in such a way, and it became known as “Black Peter”. Sadly, on 28 November 1944, “Black Peter” was lost in the Bay of Bengal whilst on an anti-submarine patrol from Koggala. The Squadron moved to Burma in April 1945 before returning to Singapore in December and then came home to Calshot in the UK in April 1946. It later flew in the Berlin airlift and in February 1949 moved to Pembroke Dock where it resumed its maritime operations with Sunderland MR5s until disbanding as one of the RAF’s last two flying boat Squadrons on 28 February 1957. 230 Squadron reformed at Dishforth on 1 September 1958 equipped with Pioneer CC1s. It moved to Upavon in May 1959 adding Twin Pioneers in January 1960 and relocated to Odiham in May. In September 1960 it detached ‘A’ Flt to the Cameroons, returning in September 1961. At the same time, Pioneers flew border patrols in Northern Ireland. A radical change in equipment began in June 1962 with Whirlwind HC10 helicopters taken to Gutersloh in Germany in January 1963. The Squadron returned to Odiham in January 1965 but transferred to Borneo in March for operations. It returned to Odiham in December 1966 providing detachments to Cyprus until 1971. Conversion to the Puma HC1 started in November 1971, continuing support for the Army in Northern Ireland, Belize, Cyprus and Germany, with a permanent move to Gutersloh in October 1980. The Squadron played a prominent role in the Gulf during 1990/1991, before moving its field of operations to Northern Ireland on 4 May 1992. Since 1996 elements of 230 Squadron have been involved in a number of Peace Support Operations in the Balkans. In April 2002 it gained an extra flight of Pumas following the disbandment of No. 72 Squadron making 230 Squadron the sole permanent RAF flying unit in Northern Ireland. 230 Squadron supported Operation TELIC from 2003 initially based at Basrah Air Station and from 2004 a detachment of Pumas supported operations in Baghdad. In August 2007 Operation BANNER, the name for operational support in Northern Ireland and the longest operation in modern military history, ceased. 230 Squadron continued to support Operation TELIC until it’s end in July 2009. Overseas training continued with regular deployments to Kenya to support Exercise GRAND PRIX and ASKARI THUNDER. 230 Squadron left Northern Ireland in November 2009 for RAF Benson and in December 2012 the Squadron flew its last Puma HC Mk1 sortie and began the transition to the Mk2. To mark the Squadron’s 95th Anniversary in August 2013 ZJ955 was painted black to replicate “Black Peter” and serve as a tribute to all the men and women who bravely served on 230 Squadron. The new “Black Peter” then deployed in July 2015 to Afghanistan to join 230 Squadron B Flight on Operation TORAL, the Squadron’s first operational deployment with the upgraded Puma HC Mk2.