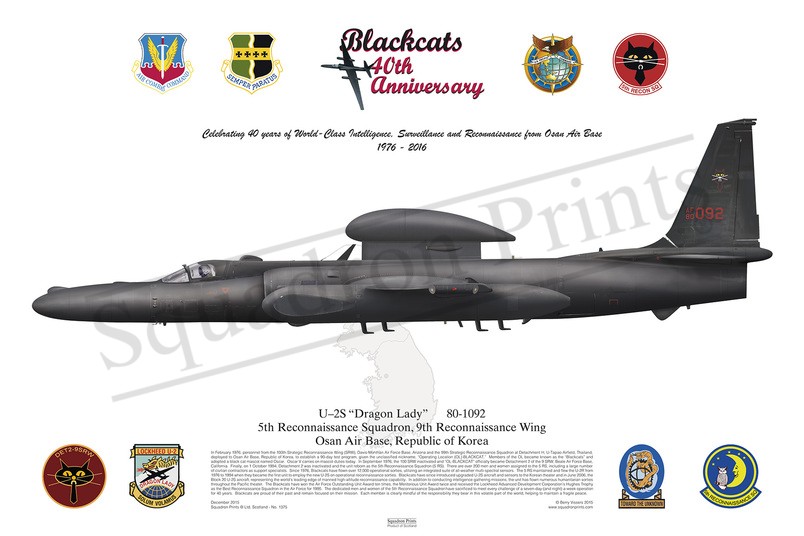 Squadron Prints Lithograph No. 1375 - 80-1092, U-2S Dragon Lady, 5th Reconnaissance Squadron, 9th Reconnaissance Wing, Osan Air Base, Republic of Korea. In February 1976, personnel from the 100th Strategic Reconnaissance Wing (SRW), Davis-Monthan Air Force Base, Arizona and the 99th Strategic Reconnaissance Squadron at Detachment H, U-Tapao Airfield, Thailand, deployed to Osan Air Base, Republic of Korea, to establish a 90-day test program, given the unclassified nickname, “Operating Location (OL)-BLACKCAT.” Members of the OL became known as the “Blackcats” and adopted a black cat mascot named Oscar. Oscar V carries on mascot duties today. In September 1976, the 100 SRW inactivated and “OL-BLACKCAT” officially became Detachment 2 of the 9 SRW, Beale Air Force Base, California. Finally, on 1 October 1994, Detachment 2 was inactivated and the unit reborn as the 5th Reconnaissance Squadron (5 RS). There are over 200 men and women assigned to the 5 RS, including a large number of civilian contractors as support specialists. Since 1976, Blackcats have flown over 12,000 operational sorties, utilizing an integrated suite of all-weather multi-spectral sensors. The 5 RS maintained and flew the U-2R from 1976 to 1994 when they became the first unit to employ the new U-2S on operational reconnaissance sorties. Blackcats have since introduced upgraded U-2S aircraft and sensors to the Korean theater and in June 2006, the Block 20 U-2S aircraft, representing the world’s leading edge of manned high-altitude reconnaissance capability. In addition to conducting intelligence gathering missions, the unit has flown numerous humanitarian sorties throughout the Pacific theater. The Blackcats have won the Air Force Outstanding Unit Award ten times, the Meritorious Unit Award twice and received the Lockheed Advanced Development Corporation’s Hughes Trophy as the Best Reconnaissance Squadron in the Air Force for 1995. The dedicated men and women of the 5th Reconnaissance Squadron have sacrificed to meet every challenge of a seven-day-(and night) a-week operation for 40 years. Blackcats are proud of their past and remain focused on their mission. Each member is clearly mindful of the responsibility they bear in this volatile part of the world, helping to maintain a fragile peace.