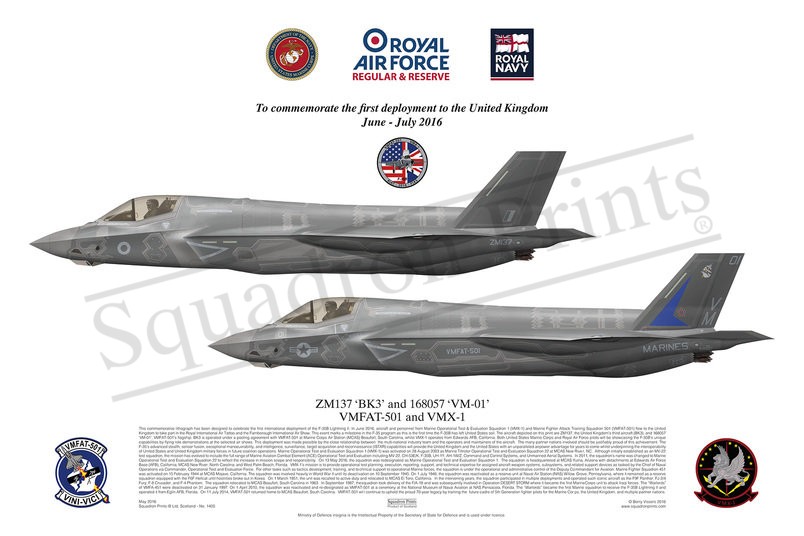 Squadron Prints Lithograph No. 1405 - ZM137 'BK-3', 168057 'VM-01', VMFAT-501 and VMX-1. To commemorate the first deployment to the United Kingdom June - July 2016 This commemorative lithograph has been designed to celebrate the first international deployment of the F-35B Lightning II. In June 2016, aircraft and personnel from Marine Operational Test & Evaluation Squadron 1 (VMX-1) and Marine Fighter Attack Training Squadron 501 (VMFAT-501) flew to the United Kingdom to take part in the Royal International Air Tattoo and the Farnborough International Air Show. This event marks a milestone in the F-35 program as this is the first time the F-35B has left United States soil. The aircraft depicted on this print are ZM137, the United Kingdomâ€™s third aircraft (BK3), and 168057 â€˜VM-01â€™, VMFAT-501â€™s flagship. BK3 is operated under a pooling agreement with VMFAT-501 at Marine Corps Air Station (MCAS) Beaufort, South Carolina, whilst VMX-1 operates from Edwards AFB, California. Both United States Marine Corps and Royal Air Force pilots will be showcasing the F-35Bâ€™s unique capabilities by flying role demonstrations at the selected air shows. This deployment was made possible by the close relationship between the multi-national industry team and the operators and maintainers of the aircraft. The many partner nations involved should be justifiably proud of this achievement. The F-35â€™s advanced stealth, sensor fusion, exceptional manoeuvrability, and intelligence, surveillance, target acquisition and reconnaissance (ISTAR) capabilities will provide the United Kingdom and the United States with an unparalleled airpower advantage for years to come whilst underpinning the interoperability of United States and United Kingdom military forces in future coalition operations. Marine Operational Test and Evaluation Squadron 1 (VMX-1) was activated on 28 August 2003 as Marine Tiltrotor Operational Test and Evaluation Squadron 22 at MCAS New River, NC. Although initially established as an MV-22 test squadron, the mission has evolved to include the full range of Marine Aviation Combat Element (ACE) Operational Test and Evaluation including MV-22, CH-53E/K, F-35B, UH-1Y, AH-1W/Z, Command and Control Systems, and Unmanned Aerial Systems. In 2011, the squadronâ€™s name was changed to Marine Operational Test and Evaluation Squadron 22 to reflect the increase in mission scope and responsibility. On 13 May 2016, the squadron was redesignated as Marine Operational Test and Evaluation Squadron 1. The squadron is headquartered at MCAS Yuma, Arizona with detachments at Edwards Air Force Base (AFB), California; MCAS New River, North Carolina; and West Palm Beach, Florida. VMX-1â€™s mission is to provide operational test planning, execution, reporting, support, and technical expertise for assigned aircraft weapon systems, subsystems, and related support devices as tasked by the Chief of Naval Operations via Commander, Operational Test and Evaluation Force. For other tasks such as tactics development, training, and technical support to operational Marine forces, the squadron is under the operational and administrative control of the Deputy Commandant for Aviation. Marine Fighter Squadron 451 was activated on 15 February 1944 at MCAS Mojave, California. The squadron was involved heavily in World War II until its deactivation on 10 September 1945. On 1 July 1946, the squadron was reactivated as a reserve unit at Naval Air Station (NAS) Willow Grove, Pennsylvania, where it remained as a reserve squadron equipped with the F6F Hellcat until hostilities broke out in Korea. On 1 March 1951, the unit was recalled to active duty and relocated to MCAS El Toro, California. In the intervening years, the squadron participated in multiple deployments and operated such iconic aircraft as the F9F Panther, FJ-2/4 Fury, F-8 Crusader, and F-4 Phantom. The squadron relocated to MCAS Beaufort, South Carolina in 1963. In September 1987, the squadron took delivery of the F/A-18 and was subsequently involved in Operation DESERT STORM where it became the first Marine Corps unit to attack Iraqi forces. The â€œWarlordsâ€ of VMFA-451 were deactivated on 31 January 1997. On 1 April 2010, the squadron was reactivated and re-designated as VMFAT-501 at a ceremony at the National Museum of Naval Aviation at NAS Pensacola, Florida. The â€œWarlordsâ€ became the first Marine squadron to receive the F-35B Lightning II and operated it from Eglin AFB, Florida. On 11 July 2014, VMFAT-501 returned home to MCAS Beaufort, South Carolina. VMFAT-501 will continue to uphold the proud 70-year legacy by training the future cadre of 5th Generation fighter pilots for the Marine Corps, the United Kingdom, and multiple partner nations.