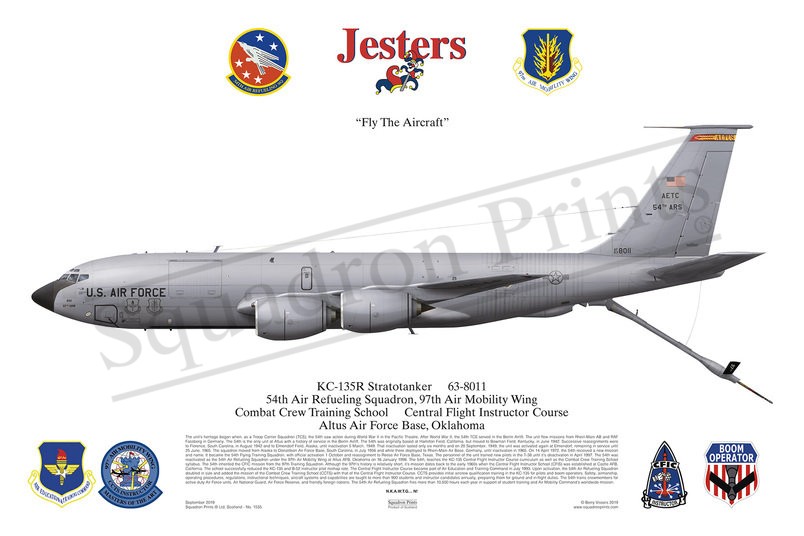 The unit’s heritage began when, as a Troop Carrier Squadron (TCS), the 54th saw action during World War II in the Pacific Theatre. After World War II, the 54th TCS served in the Berlin Airlift. The unit flew missions from Rhein-Main AB and RAF Fassberg in Germany. The 54th is the only unit at Altus with a history of service in the Berlin Airlift. The 54th was originally based at Hamilton Field, California, but moved to Bowman Field, Kentucky, in June 1942. Successive reassignments were to Florence, South Carolina, in August 1942 and to Elmendorf Field, Alaska, until inactivation 5 March, 1949. That inactivation lasted only six months and on 20 September, 1949, the unit was activated again at Elmendorf, remaining in service until 25 June, 1965. The squadron moved from Alaska to Donaldson Air Force Base, South Carolina, in July 1956 and while there deployed to Rhein-Main Air Base, Germany, until inactivation in 1965. On 14 April 1972, the 54th received a new mission and name. It became the 54th Flying Training Squadron, with official activation 1 October and reassignment to Reese Air Force Base, Texas. The personnel of the unit trained new pilots in the T-38 until it’s deactivation in April 1997. The 54th was reactivated as the 54th Air Refueling Squadron under the 97th Air Mobility Wing at Altus AFB, Oklahoma on 16 January 1998. The 54th, teaches the KC-135 Central Flight Instructor Course curriculum as well as the Combat Crew Training School syllabus. The 54th inherited the CFIC mission from the 97th Training Squadron. Although the 97th’s history is relatively short, it’s mission dates back to the early 1960s when the Central Flight Instructor School (CFIS) was established at Castle AFB, California. The school successfully reduced the KC-135 and B-52 instructor pilot mishap rate. The Central Flight Instructor Course became part of Air Education and Training Command in July 1993. Upon activation, the 54th Air Refueling Squadron doubled in size and added the mission of the Combat Crew Training School (CCTS) with that of the Central Flight Instructor Course. CCTS provides initial aircrew qualification training in the KC-135 for pilots and boom operators. Safety, airmanship, operating procedures, regulations, instructional techniques, aircraft systems and capabilities are taught to more than 900 students and instructor candidates annually, preparing them for ground and in-flight duties. The 54th trains crewmembers for active duty Air Force units, Air National Guard, Air Force Reserve, and friendly foreign nations. The 54th Air Refueling Squadron flies more than 10,500 hours each year in support of student training and Air Mobility Command’s worldwide mission.