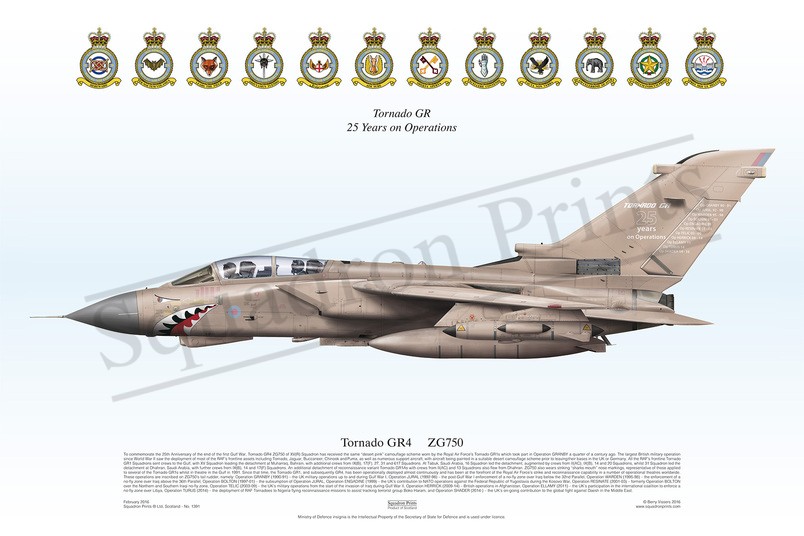 Squadron Prints Lithograph No. 1391 - Tornado GR4, ZG750. Tornado GR, 25 Year on Operations. To commemorate the 25th Anniversary of the end of the first Gulf War, Tornado GR4 ZG750 of XV(R) Squadron has received the same “desert pink” camouflage scheme worn by the Royal Air Force’s Tornado GR1s which took part in Operation GRANBY a quarter of a century ago. The largest British military operation since World War II saw the deployment of most of the RAF’s frontline assets including Tornado, Jaguar, Buccaneer, Chinook and Puma, as well as numerous support aircraft, with aircraft being painted in a suitable desert camouflage scheme prior to leaving their bases in the UK or Germany. All the RAF’s frontline Tornado GR1 Squadrons sent crews to the Gulf, with XV Squadron leading the detachment at Muharraq, Bahrain, with additional crews from IX(B), 17(F), 27, 31 and 617 Squadrons. At Tabuk, Saudi Arabia, 16 Squadron led the detachment, augmented by crews from II(AC), IX(B), 14 and 20 Squadrons, whilst 31 Squadron led the detachment at Dhahran, Saudi Arabia, with further crews from IX(B), 14 and 17(F) Squadrons. An additional detachment of reconnaissance variant Tornado GR1As with crews from II(AC) and 13 Squadrons also flew from Dhahran. ZG750 also wears striking “sharks mouth” nose markings, representative of those applied to several of the Tornado GR1s whilst in theatre in the Gulf in 1991. Since that time, the Tornado GR1, and subsequently GR4, has been operationally deployed almost continuously and has been at the forefront of the Royal Air Force’s strike and reconnaissance capability in a number of operational theatres worldwide. These operations are inscribed on ZG750’s tail rudder, namely: Operation GRANBY (1990-91) – the UK military operations up to and during Gulf War I, Operation JURAL (1992-98) – the post-Gulf War I enforcement of a no-fly zone over Iraq below the 32nd Parallel, Operation WARDEN (1995-98) – the enforcement of a no-fly zone over Iraq above the 36th Parallel, Operation BOLTON (1997-01) – the subsumption of Operation JURAL, Operation ENGADINE (1999) – the UK’s contribution to NATO operations against the Federal Republic of Yugoslavia during the Kosovo War, Operation RESINATE (2001-03) – formerly Operation BOLTON over the Northern and Southern Iraqi no-fly zone, Operation TELIC (2003-09) – the UK’s military operations from the start of the invasion of Iraq during Gulf War II, Operation HERRICK (2009-14) – British operations in Afghanistan, Operation ELLAMY (2011) – the UK’s participation in the international coalition to enforce a no-fly zone over Libya, Operation TURUS (2014) – the deployment of RAF Tornadoes to Nigeria flying reconnaissance missions to assist tracking terrorist group Boko Haram, and Operation SHADER (2014-) – the UK’s on-going contribution to the global fight against Daesh in the Middle East.