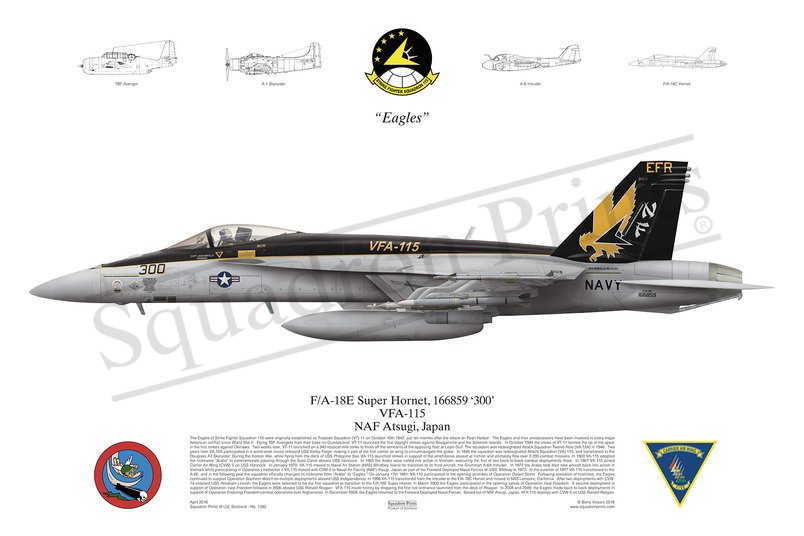 Squadron Prints Lithograph No. 1385 - 166859 '300', F/A-18E Super Hornet, VFA-115, NAS Atsugi, Japan. The Eagles of Strike Fighter Squadron 115 were originally established as Torpedo Squadron (VT) 11 on October 10th 1942, just ten months after the attack on Pearl Harbor. The Eagles and their predecessors have been involved in every major American conflict since World War II. Flying TBF Avengers from their base on Guadalcanal, VT-11 launched the first daylight strikes against Bougainville and the Solomon Islands. In October 1944 the crews of VT-11 formed the tip of the spear in the first strikes against Okinawa. Two weeks later, VT-11 launched on a 340 nautical mile strike to finish off the remnants of the opposing fleet at Leyte Gulf. The squadron was redesignated Attack Squadron Twelve Able (VA-12A) in 1946. Two years later VA-12A participated in a world-wide cruise onboard USS Valley Forge, making it part of the first carrier air wing to circumnavigate the globe. In 1948 the squadron was redesignated Attack Squadron (VA) 115, and transitioned to the Douglass A1 Skyraider. During the Korean War, while flying from the deck of USS Philippine Sea, VA-115 launched strikes in support of the amphibious assault at Inchon and ultimately flew over 2,200 combat missions. In 1960 VA-115 adopted the nickname â€œArabsâ€ to commemorate passing through the Suez Canal aboard USS Hancock. In 1965 the Arabs were called into action in Vietnam, executing the first of two back-to-back combat deployments there. In 1967 VA-115 joined Carrier Air Wing (CVW) 5 on USS Hancock. In January 1970, VA-115 moved to Naval Air Station (NAS) Whidbey Island for transition to its third aircraft, the Grumman A-6A Intruder. In 1972 the Arabs took their new aircraft back into action in Vietnam while participating in Operation Linebacker I. VA-115 moved with CVW-5 to Naval Air Facility (NAF) Atsugi, Japan as part of the Forward Deployed Naval Forces on USS Midway in 1973. In the summer of 1977 VA-115 transitioned to the A-6E, and in the following year the squadron officially changed its nickname from â€œArabsâ€ to â€œEagles.â€ On January 17th 1991, VA-115 participated in the opening airstrikes of Operation Desert Storm. Following cessation of hostilities, the Eagles continued to support Operation Southern Watch on multiple deployments aboard USS Independence. In 1996 VA-115 transitioned from the Intruder to the F/A-18C Hornet and moved to NAS Lemoore, California. After two deployments with CVW-14 onboard USS Abraham Lincoln, the Eagles were selected to be the first squadron to transition to the F/A-18E Super Hornet. In March 2003 the Eagles participated in the opening salvos of Operation Iraqi Freedom. A second deployment in support of Operation Iraqi Freedom followed in 2006 aboard USS Ronald Reagan. VFA-115 made history by dropping the first live ordnance launched from the deck of Reagan. In 2008 and 2009, the Eagles made back to back deployments in support of Operation Enduring Freedom combat operations over Afghanistan. In December 2009, the Eagles returned to the Forward Deployed Naval Forces. Based out of NAF Atsugi, Japan, VFA-115 deploys with CVW-5 on USS Ronald Reagan.