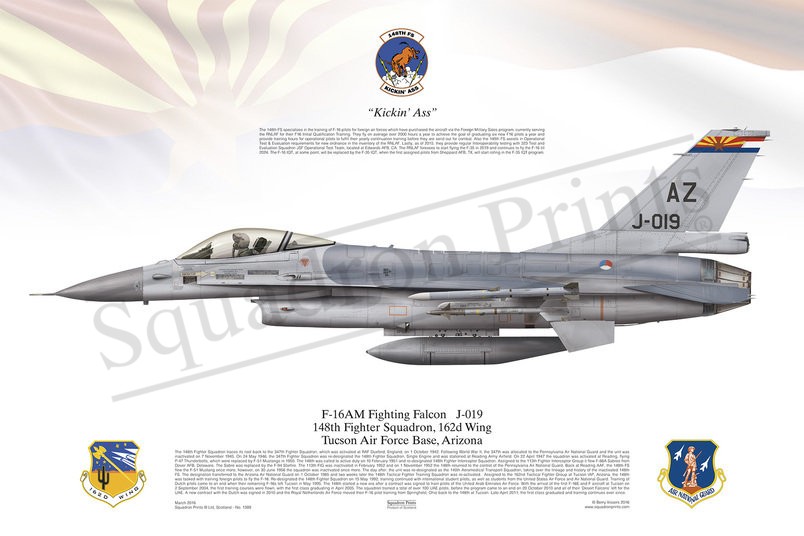 Squadron Prints Lithograph No. 1389 - J-019, F-16AM Fighting Falcon, 148th Fighter Squadron, 162d Wing, Tucson AFB, Arizona. The 148th FS specializes in the training of F-16 pilots for foreign air forces which have purchased the aircraft via the Foreign Military Sales program, currently serving the RNLAF for their F16 Initial Qualification Training. They fly on average over 2000 hours a year to achieve the goal of graduating six new F16 pilots a year and provide training hours for operational pilots to fulfill their yearly continuation training before they are send out for combat. Also the 148th FS assists in Operational Test & Evaluation requirements for new ordnance in the inventory of the RNLAF. Lastly, as of 2015, they provide regular Interoperability testing with 323 Test and Evaluation Squadron JSF Operational Test Team, located at Edwards AFB, CA. The RNLAF foresees to start flying the F-35 in 2019 and continues to fly the F-16 till 2024. The F-16 IQT, at some point, will be replaced by the F-35 IQT, when the first assigned pilots from Sheppard AFB, TX, will start rolling in the F-35 IQT program. The 148th Fighter Squadron traces its root back to the 347th Fighter Squadron, which was activated at RAF Duxford, England, on 1 October 1942. Following World War II, the 347th was allocated to the Pennsylvania Air National Guard and the unit was inactivated on 7 November 1945. On 24 May 1946, the 347th Fighter Squadron was re-designated the 148th Fighter Squadron, Single Engine and was stationed at Reading Army Airfield. On 22 April 1947 the squadron was activated at Reading, flying P-47 Thunderbolts, which were replaced by F-51 Mustangs in 1950. The 148th was called to active duty on 10 February 1951 and re-designated 148th Fighter Interceptor Squadron. Assigned to the 113th Fighter Interceptor Group it flew F-86A Sabres from Dover AFB, Delaware. The Sabre was replaced by the F-94 Starfire. The 113th FIG was inactivated in February 1952 and on 1 November 1952 the 148th returned to the control of the Pennsylvania Air National Guard. Back at Reading AAF, the 148th FS flew the F-51 Mustang once more, however, on 30 June 1956 the squadron was inactivated once more. The day after, the unit was re-designated as the 140th Aeromedical Transport Squadron, taking over the lineage and history of the inactivated 148th FS. The designation transferred to the Arizona Air National Guard on 1 October 1985 and two weeks later the 148th Tactical Fighter Training Squadron was re-activated. Assigned to the 162nd Tactical Fighter Group at Tucson IAP, Arizona, the 148th was tasked with training foreign pilots to fly the F-16. Re-designated the 148th Fighter Squadron on 15 May 1992, training continued with international student pilots, as well as students from the United States Air Force and Air National Guard. Training of Dutch pilots came to an end when their remaining F-16s left Tucson in May 1995. The 148th started a new era after a contract was signed to train pilots of the United Arab Emirates Air Force. With the arrival of the first F-16E and F aircraft at Tucson on 2 September 2004, the first training courses were flown, with the first class graduating in April 2005. The squadron trained a total of over 100 UAE pilots, before the program came to an end on 20 October 2010 and all of their â€˜Desert Falconsâ€™ left for the UAE. A new contract with the Dutch was signed in 2010 and the Royal Netherlands Air Force moved their F-16 pilot training from Springfield, Ohio back to the 148th at Tucson. Late April 2011, the first class graduated and training continues ever since.