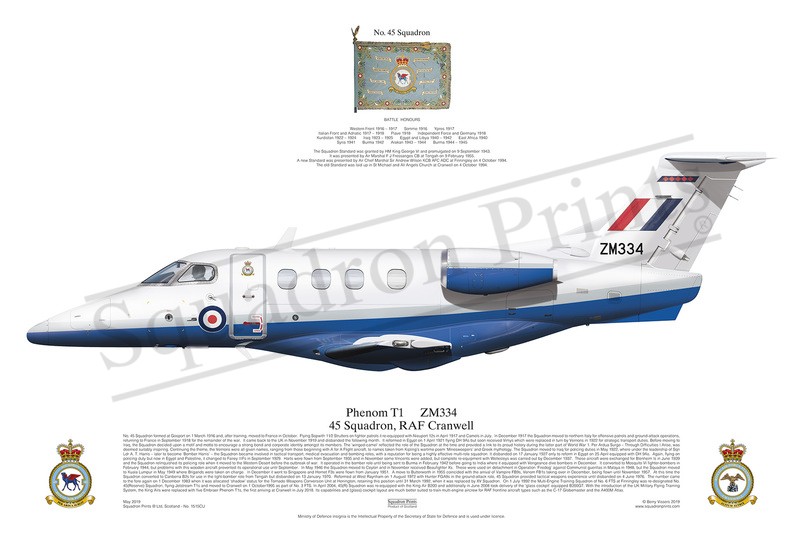 Squadron Prints Lithograph No. 1515CU - ZM334, Phentom T1, 45 Squadron, RAF Cranwell. No. 45 Squadron formed at Gosport on 1 March 1916 and, after training, moved to France in October. Flying Sopwith 11/2 Strutters on fighter patrols it re-equipped with Nieuport 12s in April 1917 and Camels in July. In December 1917 the Squadron moved to northern Italy for offensive patrols and ground-attack operations, returning to France in September 1918 for the remainder of the war. It came back to the UK in November 1919 and disbanded the following month. It reformed in Egypt on 1 April 1921 flying DH 9As but soon received Vimys which were replaced in turn by Vernons in 1922 for strategic transport duties. Before moving to Iraq, the Squadron decided upon a motif and motto to encourage a strong bond and corporate identity amongst its members. The 'winged-camel' reflected the role of the Squadron at the time and provided a link to its proud history during the latter part of World War 1. Per Ardua Surgo â€“ Through Difficulties I Arise, was deemed suitably inspiring. Continuing the theme, the Vernons were all given names, ranging from those beginning with A for A Flight aircraft, to names taken from Kipling's wartime poem 'Minesweepers' and Greek mythology. The Squadron moved to Iraq for policing duties in May 1922, where under the leadership of Sqn Ldr A. T. Harris â€“ later to become 'Bomber Harris' â€“ the Squadron became involved in tactical transport, medical evacuation and bombing roles, with a reputation for being a highly effective multi-role squadron. It disbanded on 17 January 1927 only to reform in Egypt on 25 April equipped with DH 9As. Again, flying on policing duty but now in Egypt and Palestine, it changed to Fairey IIIFs in September 1929. Harts were flown from September 1935 and in November some Vincents were added, but complete re-equipment with Wellesleys was carried out by December 1937. These aircraft were exchanged for Blenheim Is in June 1939 and the Squadron relinquished its policing role when it moved to the Western Desert before the outbreak of war. It operated in the bomber role until being sent to Burma in February 1942 before going to India where it equipped with Vengeance dive bombers in December. It converted to Mosquito VI fighter-bombers in February 1944, but problems with this wooden aircraft prevented its operational use until September. In May 1946 the Squadron moved to Ceylon and in November received Beaufighter Xs. These were used on detachment in Operation 'Firedog' against Communist guerillas in Malaya in 1948, but the Squadron moved to Kuala Lumpur in May 1949 where Brigands were taken on charge. In December it went to Singapore and Hornet F3s were flown from January 1951. A move to Butterworth in 1955 coincided with the arrival of Vampire FB9s, Venom FB1s taking over in December, being flown until November 1957. At this time the Squadron converted to Canberra B2s for use in the light-bomber role from Tengah but disbanded on 13 January 1970. Reformed at West Raynham on 1 August 1972 with Hunter FGA9s in the ground-attack role, 45 Squadron provided tactical weapons experience until disbanded on 4 June 1976. The number came to the fore again on 1 December 1983 when it was allocated 'shadow' status for the Tornado Weapons Conversion Unit at Honington, retaining this position until 31 March 1992, when it was replaced by XV Squadron. On 1 July 1992 the Multi-Engine Training Squadron of No. 6 FTS at Finningley was re-designated No. 45(Reserve) Squadron, flying Jetstream T1s and moved to Cranwell on 1 October1995 as part of No. 3 FTS. In April 2004, 45(R) Squadron was re-equipped with the King Air B200 and additionally in June 2008 took delivery of the 'glass cockpit' equipped B200GT. With the introduction of the UK Military Flying Training System, the King Airs were replaced with five Embraer Phenom T1s, the first arriving at Cranwell in July 2018. Its capabilities and (glass) cockpit layout are much better suited to train multi-engine aircrew for RAF frontline aircraft types such as the C-17 Globemaster and the A400M Atlas.