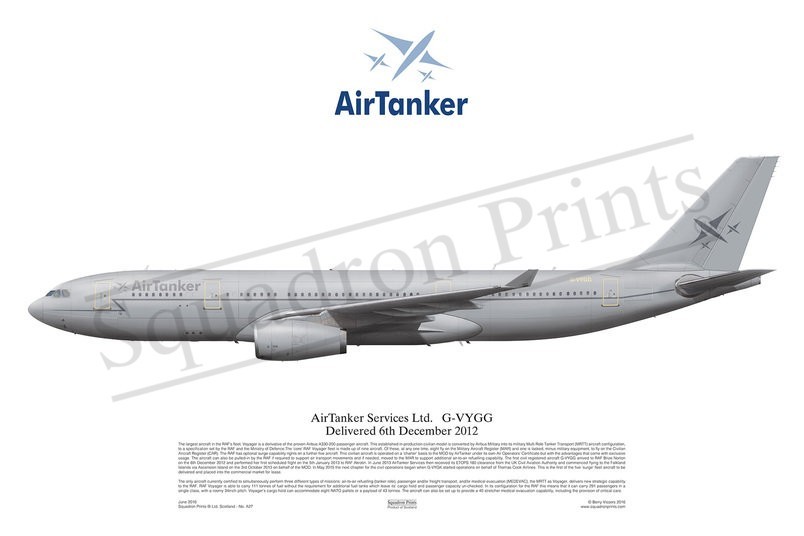 Squadron Prints Lithograph No. A27 - AirTanker Services Ltd, G-VYGG, Delivered 6th December 2012. The largest aircraft in the RAFâ€™s fleet, Voyager is a derivative of the proven Airbus A330-200 passenger aircraft. This established in-production civilian model is converted by Airbus Military into its military Multi Role Tanker Transport (MRTT) aircraft configuration, to a specification set by the RAF and the Ministry of Defence.The â€˜coreâ€™ RAF Voyager fleet is made up of nine aircraft. Of these, at any one time, eight fly on the Military Aircraft Register (MAR) and one is tasked, minus military equipment, to fly on the Civilian Aircraft Register (CAR). The RAF has optional surge capability rights on a further five aircraft. This civilian aircraft is operated on a â€™charterâ€™ basis to the MOD by AirTanker under its own Air Operatorsâ€™ Certificate but with the advantages that come with exclusive usage. The aircraft can also be pulled-in by the RAF if required to support air transport movements and if needed, moved to the MAR to support additional air-to-air refuelling capability. The first civil registered aircraft G-VYGG arrived to RAF Brize Norton on the 6th December 2012 and performed her first scheduled flight on the 5th January 2013 to RAF Akrotiri. In June 2013 AirTanker Services then received its ETOPS 180 clearance from the UK Civil Aviation Authority and commenced flying to the Falkland Islands via Ascension Island on the 3rd October 2013 on behalf of the MOD. In May 2015 the next chapter for the civil operations began when G-VYGK started operations on behalf of Thomas Cook Airlines. This is the first of the five â€˜surgeâ€™ fleet aircraft to be delivered and placed into the commercial market for lease. The only aircraft currently certified to simultaneously perform three different types of missions: air-to-air refuelling (tanker role), passenger and/or freight transport, and/or medical evacuation (MEDEVAC), the MRTT as Voyager, delivers new strategic capability to the RAF. RAF Voyager is able to carry 111 tonnes of fuel without the requirement for additional fuel tanks which leave itsâ€™ cargo hold and passenger capacity un-checked. In its configuration for the RAF this means that it can carry 291 passengers in a single class, with a roomy 34inch pitch. Voyagerâ€™s cargo hold can accommodate eight NATO pallets or a payload of 43 tonnes. The aircraft can also be set up to provide a 40 stretcher medical evacuation capability, including the provision of critical care.