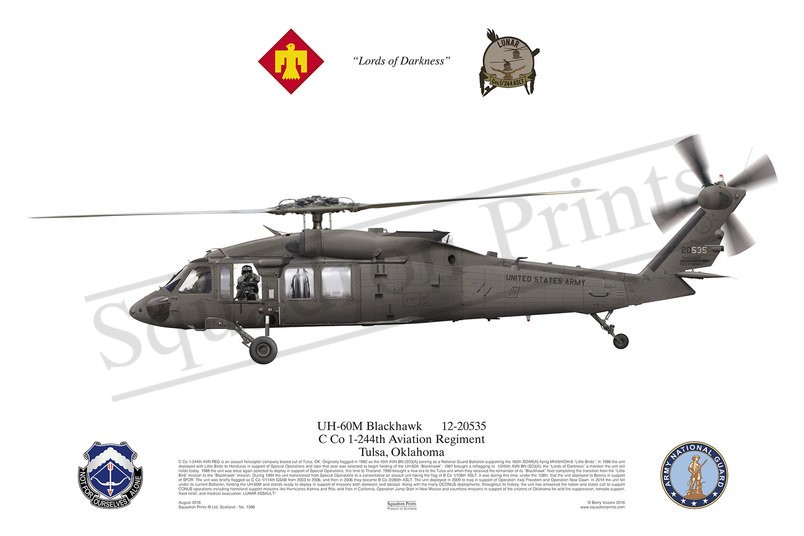 Squadron Prints Lithograph No. 1396 - 12-20535, UH-60M Blackhawk, C Co 1-244th Aviation Regiment, Tulsa, Oklahoma. C Co 1-244th AVN REG is an assault helicopter company based out of Tulsa, OK. Originally flagged in 1982 as the 45th AVN BN (SO)(A) serving as a National Guard Battalion supporting the 160th SOAR(A) flying MH/AH/OH-6 â€œLittle Birdsâ€. In 1986 the unit deployed with Little Birds to Honduras in support of Special Operations and later that year was selected to begin fielding of the UH-60A â€œBlackhawkâ€. 1987 brought a reflagging to 1/245th AVN BN (SO)(A); the â€œLords of Darknessâ€ a moniker the unit still holds today. 1988 the unit was once again selected to deploy in support of Special Operations, this time to Thailand. 1990 brought a new era to the Tulsa unit when they received the remainder of its â€œBlackhawkâ€ fleet completing the transition from the â€œLittle Birdâ€ mission to the â€œBlackhawkâ€ mission. During 1994 the unit transitioned from Special Operations to a conventional air assault unit taking the flag of B Co 1/108th ASLT. It was during this time, under the 108th, that the unit deployed to Bosnia in support of SFOR. The unit was briefly flagged as C Co 1/114th GSAB from 2003 to 2006, and then in 2006 they became B Co 2/285th ASLT. The unit deployed in 2009 to Iraq in support of Operation Iraqi Freedom and Operation New Dawn. In 2014 the unit fell under its current Battalion, fielding the UH-60M and stands ready to deploy in support of missions both domestic and abroad. Along with the many OCONUS deployments, throughout its history, the unit has answered the nation and states call to support CONUS operations including homeland support missions like Hurricanes Katrina and Rita, wild fires in California, Operation Jump Start in New Mexico and countless missions in support of the citizens of Oklahoma for wild fire suppression, tornado support, flood relief, and medical evacuation. LUNAR ASSAULT!