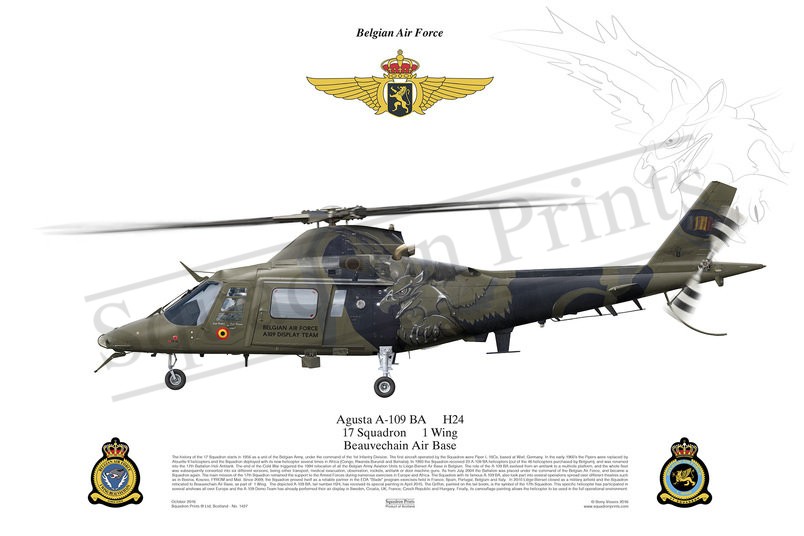 Squadron Prints Lithograph No. 1427 - H24, A109BA, 17 Squadron, 1 Wing, Beauvechain Air Base. The history of the 17 Squadron starts in 1956 as a unit of the Belgian Army, under the command of the 1st Infantry Division. The first aircraft operated by the Squadron were Piper L-18Cs, based at Werl, Germany. In the early 1960's the Pipers were replaced by Alouette II helicopters and the Squadron deployed with its new helicopter several times in Africa (Congo, Rwanda-Burundi and Somalia). In 1993 the Squadron received 23 A-109 BA helicopters (out of the 46 helicopters purchased by Belgium), and was renamed into the 17th Battalion Heli Antitank. The end of the Cold War triggered the 1994 relocation of all the Belgian Army Aviation Units to Liege-Bierset Air Base in Belgium. The role of the A-109 BA evolved from an antitank to a multirole platform, and the whole fleet was subsequently converted into six different versions, being either transport, medical evacuation, observation, rockets, antitank or door machine guns. As from July 2004 the Battalion was placed under the command of the Belgian Air Force, and became a Squadron again. The main mission of the 17th Squadron remained the support to the Armed Forces during numerous exercises in Europe and Africa. The Squadron with its famous A-109 BA, also took part into several operations spread over different theatres such as in Bosnia, Kosovo, FYROM and Mali. Since 2009, the Squadron proved itself as a reliable partner in the EDA "Blade" program exercises held in France, Spain, Portugal, Belgium and Italy. In 2010 Liege-Bierset closed as a military airfield and the Squadron relocated to Beauvechain Air Base, as part of 1 Wing. The depicted A-109 BA, tail number H24, has received its special painting in April 2015. The Griffon, painted on the tail boom, is the symbol of the 17th Squadron. This specific helicopter has participated in several airshows all over Europe and the A-109 Demo Team has already performed their air display in Sweden, Croatia, UK, France, Czech Republic and Hungary. Finally, its camouflage painting allows the helicopter to be used in the full operational environment.