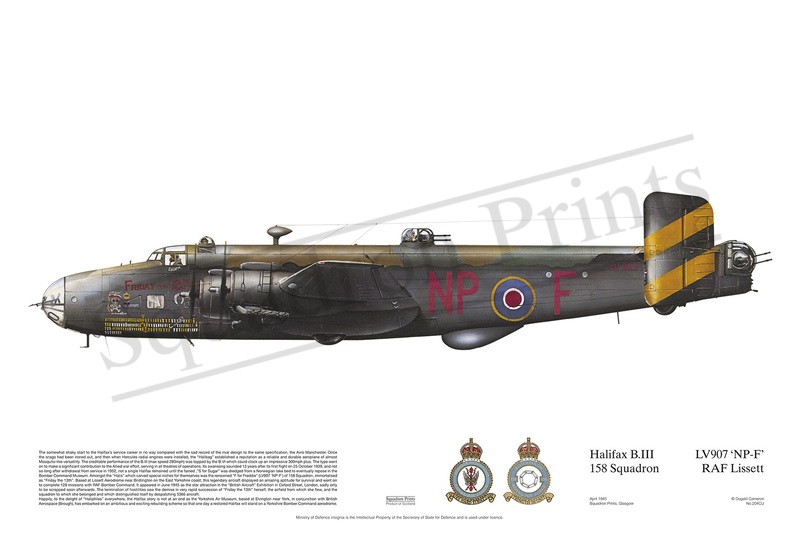 Squadron Prints Lithograph No. 204CU - LV907 'NP-F', Halifax B.III, 158 Squadron, RAF Lissett. The somewhat shaky start to the Halifaxâ€™s service career in no way compared with the sad record of the rival design to the same specification, the Avro Manchester. Once the snags had been ironed out, and then when Hercules radial engines were installed, the "Halibag" established a reputation as a reliable and durable aeroplane of almost Mosquito-like versatility. The creditable performance of the B.III (max speed 280mph) was topped by the B.VI which could clock up an impressive 300mph plus. The type went on to make a significant contribution to the Allied war effort, serving in all theatres of operations. Its swansong sounded 13 years after its first flight on 25 October 1939, and not so long after withdrawal from service in 1952, not a single Halifax remained until the famed â€š"S for Sugar" was dredged from a Norwegian lake bed to eventually repose in the Bomber Command Museum. Amongst the "Halis" which carved special niches for themselves was the renowned "F for Freddie" (LV907 'NP-F') of 158 Squadron, immortalised as "Friday the 13th". Based at Lissett Aerodrome near Bridlington on the East Yorkshire coast, this legendary aircraft displayed an amazing aptitude for survival and went on to complete 128 missions with RAF Bomber Command. It appeared in June 1945 as the star attraction in the "British Aircraft" Exhibition in Oxford Street, London, sadly only to be scrapped soon afterwards. The termination of hostilities saw the demise in very rapid succession of "Friday the 13th" herself, the airfield from which she flew, and the squadron to which she belonged and which distinguished itself by despatching 5366 aircraft. Happily, to the delight of "Haliphiles" everywhere, the Halifax story is not at an end as the Yorkshire Air Museum, based at Elvington near York, in conjunction with British Aerospace (Brough), has embarked on an ambitious and exciting rebuilding scheme so that one day a restored Halifax will stand on a Yorkshire Bomber Command aerodrome.