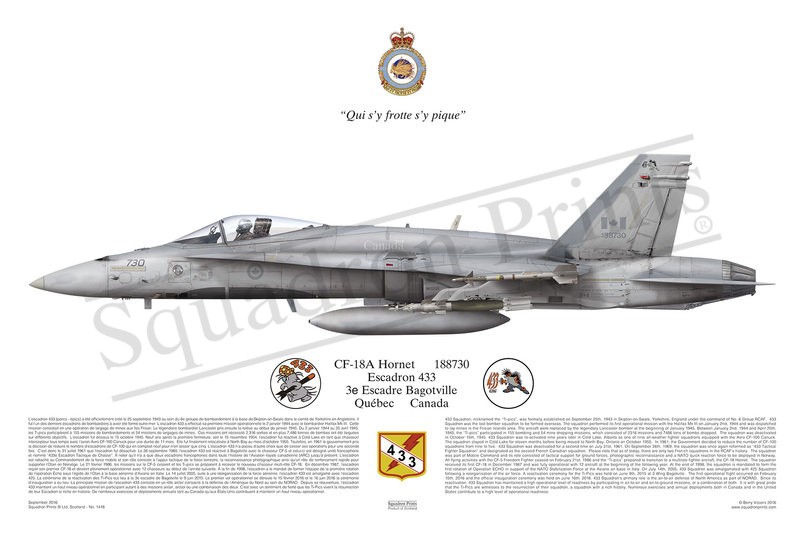 Squadron Prints Lithograph No. 1418 - 188730, CF-18A Hornet, Escadron 433, 3e Escadre, Bagotville, Quebec, Canada. 433 Squadron, nicknamed the â€œTi-picsâ€, was formally established on September 25th, 1943 in Skipton-on-Swale, Yorkshire, England under the command of No. 6 Group RCAF. 433 Squadron was the last bomber squadron to be formed overseas. The squadron performed its first operational mission with the Halifax Mk III on January 2nd, 1944 and was dispatched to lay mines in the Frisian Islands area. The aircraft were replaced by the legendary Lancaster bomber at the beginning of January 1945. Between January 2nd, 1944 and April 25th, 1945, the â€œTi-picsâ€ participated in 155 bombing and 54 mine dropping missions, which consisted of 2316 missions and 7486 tons of bombs dropped. The squadron was deactivated in October 15th, 1945. 433 Squadron was re-activated nine years later in Cold Lake, Alberta as one of nine all-weather fighter squadrons equipped with the Avro CF-100 Canuck. The squadron stayed in Cold Lake for eleven months before being moved to North Bay, Ontario on October 1955. In 1961, the Government decided to reduce the number of CF-100 squadrons from nine to five. 433 Squadron was deactivated for a second time on July 31st, 1961. On September 26th, 1969, the squadron was once again reformed as â€œ433 Tactical Fighter Squadronâ€ and designated as the second French Canadian squadron. Please note that as of today, there are only two French squadrons in the RCAFâ€™s history. The squadron was part of Mobile Command and its role consisted of tactical support for ground forces, photographic reconnaissance and a NATO quick reaction force to be deployed in Norway. All flying activities with the CF-5 Freedom Fighter ceased on February 21st, 1986 and the â€œTi-picsâ€ prepared to transition to a multirole fighter aircraft, the CF-18 Hornet. The squadron received its first CF-18 in December 1987 and was fully operational with 12 aircraft at the beginning of the following year. At the end of 1998, the squadron is mandated to form the first rotation of Operation ECHO in support of the NATO Stabilization Force at the Aviano air base in Italy. On July 14th, 2005, 433 Squadron was amalgamated with 425 Squadron following a reorganisation of the air force. A reactivation ceremony for the Ti-Pics was held on June 9th, 2015 at 3 Wing Bagotville. The first operational flight occurred on February 15th, 2016 and the official inauguration ceremony was held on June 16th, 2016. 433 Squadronâ€™s primary role is the air-to-air defense of North America as part of NORAD. Since its reactivation, 433 Squadron has maintained a high operational level of readiness by participating in air-to-air and air-to-ground missions, or a combination of both. It is with great pride that the Ti-Pics are witnesses to the resurrection of their squadron, a squadron with a rich history. Numerous exercises and annual deployments both in Canada and in the United States contribute to a high level of operational readiness.