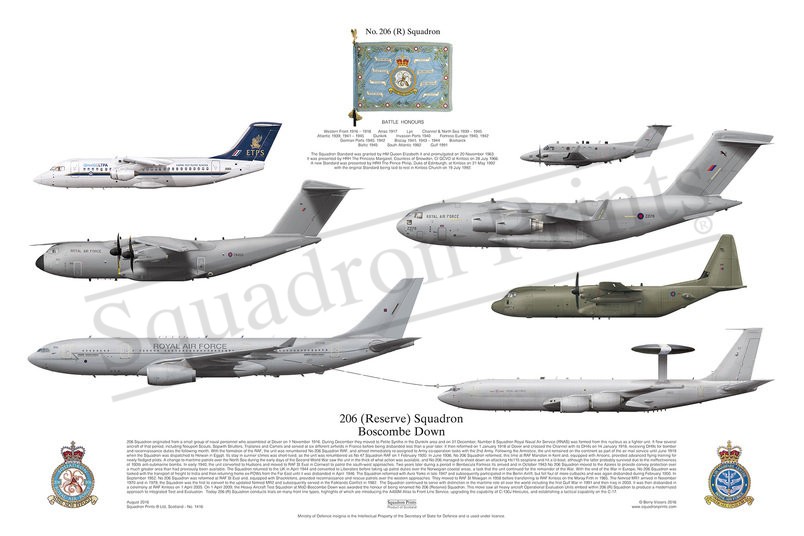 Squadron Prints Lithograph No. 1416 - 206(Reserve) Squadron, Boscombe Down. 206 Squadron originated from a small group of naval personnel who assembled at Dover on 1 November 1916. During December they moved to Petite Synthe in the Dunkirk area and on 31 December, Number 6 Squadron Royal Naval Air Service (RNAS) was formed from this nucleus as a fighter unit. It flew several aircraft of that period, including Nieuport Scouts, Sopwith Strutters, Triplanes and Camels and served at six different airfields in France before being disbanded less than a year later. It then reformed on 1 January 1918 at Dover and crossed the Channel with its DH4s on 14 January 1918, receiving DH9s for bomber and reconnaissance duties the following month. With the formation of the RAF, the unit was renumbered No 206 Squadron RAF, and almost immediately re-assigned to Army co-operation tasks with the 2nd Army. Following the Armistice, the unit remained on the continent as part of the air mail service until June 1919 when the Squadron was dispatched to Helwan in Egypt. Its stay in sunnier climes was short-lived, as the unit was renumbered as No 47 Squadron RAF on 1 February 1920. In June 1936, No 206 Squadron reformed, this time at RAF Manston in Kent and, equipped with Ansons, provided advanced flying training for newly fledged pilots. A change to maritime patrols over the North Sea during the early days of the Second World War saw the unit in the thick of what action was available, and No 206 managed to shoot down an attacking He115 seaplane and hit a U-boat, although the latter probably survived due to the ineffectiveness of 100lb anti-submarine bombs. In early 1940, the unit converted to Hudsons and moved to RAF St Eval in Cornwall to patrol the south-west approaches. Two years later during a period in Benbecula Fortress IIs arrived and in October 1943 No 206 Squadron moved to the Azores to provide convoy protection over a much greater area than had previously been available. The Squadron returned to the UK in April 1944 and converted to Liberators before taking up patrol duties over the Norwegian coastal areas, a task that the unit continued for the remainder of the War. With the end of the War in Europe, No 206 Squadron was tasked with the transport of freight to India and then returning home ex-POWs from the Far East until it was disbanded in April 1946. The Squadron reformed with Avro Yorks in late 1947 and subsequently participated in the Berlin Airlift, but fell foul of more cutbacks and was again disbanded during February 1950. In September 1952, No 206 Squadron was reformed at RAF St Eval and, equipped with Shackletons, provided reconnaissance and rescue patrols over the western approaches. They moved to RAF St Mawgan in 1958 before transferring to RAF Kinloss on the Moray Firth in 1965. The Nimrod MR1 arrived in November 1970 and in 1979, the Squadron was the first to convert to the updated Nimrod MR2 and subsequently served in the Falklands Conflict in 1982. The Squadron continued to serve with distinction in the maritime role all over the world including the first Gulf War in 1991 and then Iraq in 2003. It was then disbanded in a ceremony at RAF Kinloss on 1 April 2005. On 1 April 2009, the Heavy Aircraft Test Squadron at MoD Boscombe Down was awarded the honour of being renamed No 206 (Reserve) Squadron. This move saw all heavy aircraft Operational Evaluation Units embed within 206 (R) Squadron to produce a modernized approach to integrated Test and Evaluation. Today 206 (R) Squadron conducts trials on many front line types, highlights of which are introducing the A400M Atlas to Front Line Service, upgrading the capability of C-130J Hercules, and establishing a tactical capability on the C-17.