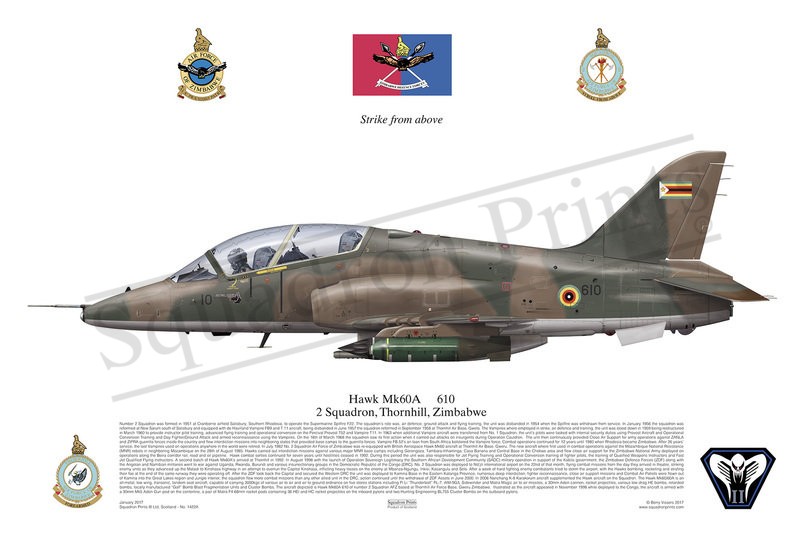 Squadron Prints Lithograph No. 1422 - 610, Hawk Mk60A, 2 Squadron, Thornhill, Zimbabwe. Number 2 Squadron was formed in 1951 at Cranborne airfield Salisbury, Southern Rhodesia, to operate the Supermarine Spitfire F22. The squadronâ€™s role was, air defence, ground attack and flying training, the unit was disbanded in 1954 when the Spitfire was withdrawn from service. In January 1956 the squadron was reformed at New Sarum south of Salisbury and equipped with de Havilland Vampire FB9 and T.11 aircraft, being disbanded in June 1957 the squadron reformed in September 1958 at Thornhill Air Base, Gwelo. The Vampires where employed in strike, air defence and training, the unit was stood down in 1959 being restructured in March 1960 to provide instructor pilot training, advanced flying training and operational conversion on the Percival Provost T52 and Vampire T11. In 1963 when additional Vampire aircraft were transferred from No. 1 Squadron, the unitâ€™s pilots were tasked with internal security duties using Provost Aircraft and Operational Conversion Training and Day Fighter/Ground Attack and armed reconnaissance using the Vampires. On the 18th of March 1968 the squadron saw its first action when it carried out attacks on insurgents during Operation Cauldron. The unit then continuously provided Close Air Support for army operations against ZANLA and ZIPRA guerrilla forces inside the country and flew interdiction missions into neighboring states that provided base camps to the guerrilla forces. Vampire FB.52â€™s on loan from South Africa bolstered the Vampire force. Combat operations continued for 12 years until 1980 when Rhodesia became Zimbabwe. After 26 yearsâ€™ service, the last Vampires used on operations anywhere in the world were retired. In July 1982 No. 2 Squadron Air Force of Zimbabwe was re-equipped with British Aerospace Hawk Mk60 aircraft at Thornhill Air Base, Gweru. The new aircraft where first used in combat operations against the Mozambique National Resistance (MNR) rebels in neighboring Mozambique on the 28th of August 1985. Hawks carried out interdiction missions against various major MNR base camps including Gorongoza, Tambara-Inhaminga, Casa Banana and Central Base in the Chokwe area and flew close air support for the Zimbabwe National Army deployed on operations along the Beira corridor rail, road and oil pipeline. Hawk combat sorties continued for seven years until hostilities ceased in 1992. During this period the unit was also responsible for Jet Flying Training and Operational Conversion training of fighter pilots, the training of Qualified Weapons Instructors and Fast Jet Qualified Flying instructors. A second batch of Hawk Mk60Aâ€™s arrived at Thornhill in 1992. In August 1998 with the launch of Operation Sovereign Legitimacy the Southern African Development Community (SADC) military operation in support of the Kabila government, the Zimbabwe Defence Forces (ZDF) along with the Angolan and Namibian militaries went to war against Uganda, Rwanda, Burundi and various insurrectionary groups in the Democratic Republic of the Congo (DRC). No. 2 Squadron was deployed to Ndâ€™jili international airport on the 22nd of that month, flying combat missions from the day they arrived in theatre, striking enemy units as they advanced up the Matadi to Kinshasa highway in an attempt to overrun the Capital Kinshasa, inflicting heavy losses on the enemy at Mbanza-Ngungu, Inkisi, Kasangulu and Selo. After a week of hard fighting enemy combatants tried to storm the airport; with the Hawks bombing, rocketing and strafing their foe at the end of the same runway they were operating off. After the ZDF took back the Capital and secured the Western DRC the unit was deployed to Kamina Base in the Eastern Katanga Province, numerous deep interdiction, fighter reconnaissance, close air support missions and Combat Air Patrols were flown out of Kamina into the Great Lakes region and Jungle interior, the squadron flew more combat missions than any other allied unit in the DRC, action continued until the withdrawal of ZDF Assets in June 2000. In 2006 Nanchang K-8 Karakorum aircraft supplemented the Hawk aircraft on the Squadron. The Hawk Mk60/60A is an all-metal, low wing, transonic, tandem seat aircraft, capable of carrying 3000kgs of various air to air and air to ground ordnance on five stores stations including Pi Li â€œThunderboltâ€ PL-7, AIM-9G/L Sidewinder and Matra Magic air to air missiles, a 30mm Aden cannon, rocket projectiles, various low drag HE bombs, retarded bombs, locally manufactured â€œGolfâ€ Bomb Blast Fragmentation Units and Cluster Bombs. The aircraft depicted is Hawk Mk60A 610 of number 2 Squadron AFZ based at Thornhill Air Force Base, Gweru Zimbabwe. Illustrated as the aircraft appeared in November 1998 while deployed to the Congo, the aircraft is armed with a 30mm Mk5 Aden Gun pod on the centerline, a pair of Matra F4 68mm rocket pods containing 36 HEI and HC rocket projectiles on the inboard pylons and two Hunting Engineering BL755 Cluster Bombs on the outboard pylons.