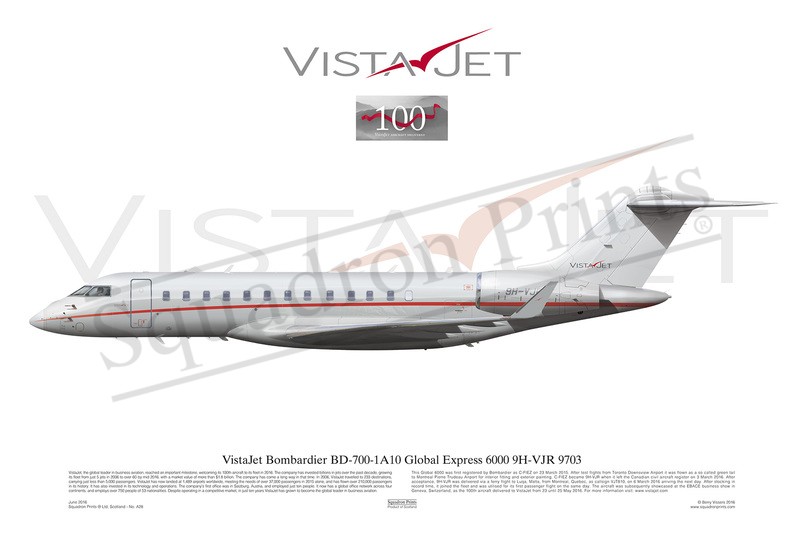 Squadron Prints Lithograph No. A28 - VistaJet Bombardier BD-700-1A10 Global Express 6000 9H-VJR 9703. VistaJet, the global leader in business aviation, reached an important milestone, welcoming its 100th aircraft to its fleet in 2016. The company has invested billions in jets over the past decade, growing its fleet from just 5 jets in 2006 to over 60 by mid 2016, with a market value of more than $1.8 billion. The company has come a long way in that time. In 2006, VistaJet travelled to 233 destinations, carrying just less than 5,000 passengers. VistaJet has now landed at 1,489 airports worldwide, meeting the needs of over 37,000 passengers in 2015 alone, and has flown over 210,000 passengers in its history. It has also invested in its technology and operations. The companyâ€™s first office was in Salzburg, Austria, and employed just ten people. It now has a global office network across four continents, and employs over 750 people of 53 nationalities. Despite operating in a competitive market, in just ten years VistaJet has grown to become the global leader in business aviation. This Global 6000 was first registered by Bombardier as C-FIEZ on 23 March 2015. After test flights from Toronto Downsview Airport it was flown as a so called green tail to Montreal Pierre Trudeau Airport for interior fitting and exterior painting. C-FIEZ became 9H-VJR when it left the Canadian civil aircraft register on 3 March 2016. After acceptance, 9H-VJR was delivered via a ferry flight to Luqa, Malta, from Montreal, Quebec, as callsign VJT810, on 6 March 2016 arriving the next day. After stocking in record time, it joined the fleet and was utilised for its first passenger flight on the same day. The aircraft was subsequently showcased at the EBACE business show in Geneva, Switzerland, as the 100th aircraft delivered to VistaJet from 23 until 25 May 2016. For more information visit: www.vistajet.com