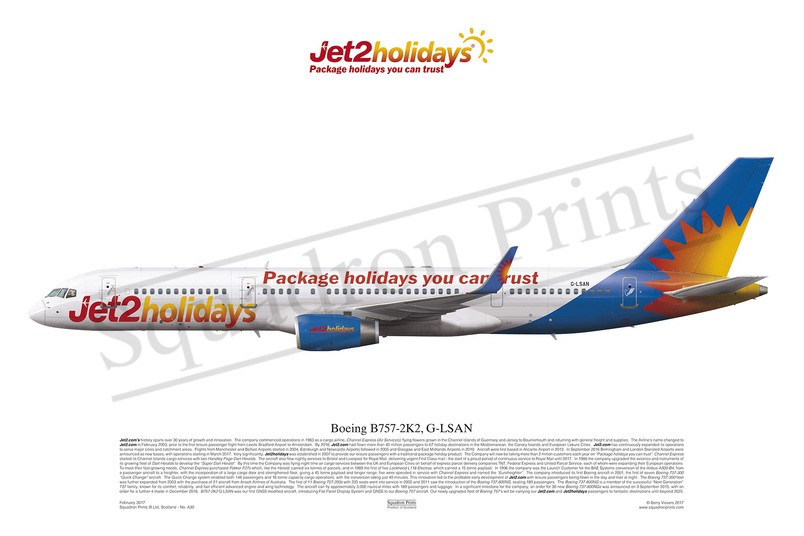 Squadron Prints Lithograph No. A30 - G-LSAN, Boeing B757-2K2. Jet2.comâ€™s history spans over 30 years of growth and innovation.Â  The company commenced operations in 1983 as a cargo airline,Â Channel Express (Air Services), flyingÂ flowers grown in the Channel Islands of Guernsey and Jersey to Bournemouth and returning with general freight and supplies. The Airlineâ€™s name changed to Jet2.com in February 2003, prior to the first leisure passenger flightÂ from Leeds Bradford Airport to Amsterdam. By 2016,Â Jet2.com had flown more than 45 million passengers to 67Â holiday destinations in the Mediterranean,Â the Canary Islands and European Leisure Cities. Jet2.com has continuously expanded its operations to serve major cities and catchment areas. Flights from Manchester and Belfast Airports started in 2004,Â Edinburgh and Newcastle Airports followed in 2005 and Glasgow and East Midlands Airports in 2010. Aircraft were first based in Alicante Airport in 2013.Â  In September 2016Â Birmingham and London Stansted Airports were announced as new bases, with operations starting in March 2017. Very significantly,Â Jet2holidays was established in 2007 to provide our leisure passengers with a traditional package holiday product. The Company will now be taking more than 2 million customers each year on â€œPackage holidays you can trustâ€. Channel Express started its Channel Islands cargo services with two Handley Page Dart Heralds.Â  The aircraft also flew nightlyÂ services to Bristol and Liverpool for Royal Mail, delivering urgent First Class mail - the start of a proudÂ period of continuous service to Royal Mail until 2017. In 1986 the company upgraded the avionics and instruments of its growing fleet of Dart HeraldsÂ to develop the â€œSuper Dart Heraldâ€.Â  By this time the Company was flying night time air cargo services between the UK and European Cities on behalf of express parcelÂ delivery companies TNT,Â Federal Express and United Parcel Service,Â each of whom were expanding their European operations.Â  To meet their fast-growing needs,Â Channel Express purchased Fokker F27sÂ which, like the Herald, carried six tonnes of parcels, and in 1989 the first of five Lockheed L118 Electras, which carried a 15 tonne payload. In 1996 the company was the Launch Customer for the BAE Systems conversion of the Airbus A300-B4,Â from a passenger aircraft to a freighter,Â with the incorporation of a large cargo door and strengthened floor,Â giving a 45 tonne payload and longer range; five were operated in service with Channel Express and named the â€œEurofreighterâ€. The company introduced its first Boeing aircraft in 2001, the first of seven Boeing 737-300 â€œQuick Changeâ€ aircraft.Â  The Quick Change system enabled both 148 passengers and 16 tonne capacity cargo operations; with the conversion taking just 40 minutes.Â This innovation led to the profitable early development ofÂ Jet2.com with leisure passengers being flown in the day and mail at night. The Boeing 737-300 fleet was further expanded from 2003Â with the purchase of 21 aircraft from Ansett AirlinesÂ of Australia.Â  The first of 11 Boeing 757-200s with 235 seats went into service in 2005 and 2011 saw the introduction of the Boeing 737-800NG, seating 189 passengers. The Boeing 737-800NG is a member of the successful â€œNext Generationâ€ 737 family, known for its comfort,Â reliability, and fuel efficient advanced engine and wing technology.Â  The aircraft can fly approximately 3,000Â nautical miles with 189 passengers and luggage.Â  In a significant milestone for the company, an order for 30 new Boeing 737-800NGs was announcedÂ on 3 September 2015, with an order for a further 4 made in December 2016.Â  B757-2K2 G-LSAN was our first GNSS modified aircraft, introducing Flat Panel Display System and GNSS to our Boeing 757 aircraft. Our newly upgraded fleet of Boeing 757â€™s will be carrying our Jet2.com and Jet2holidays passengers to fantastic destinations until beyond 2025.