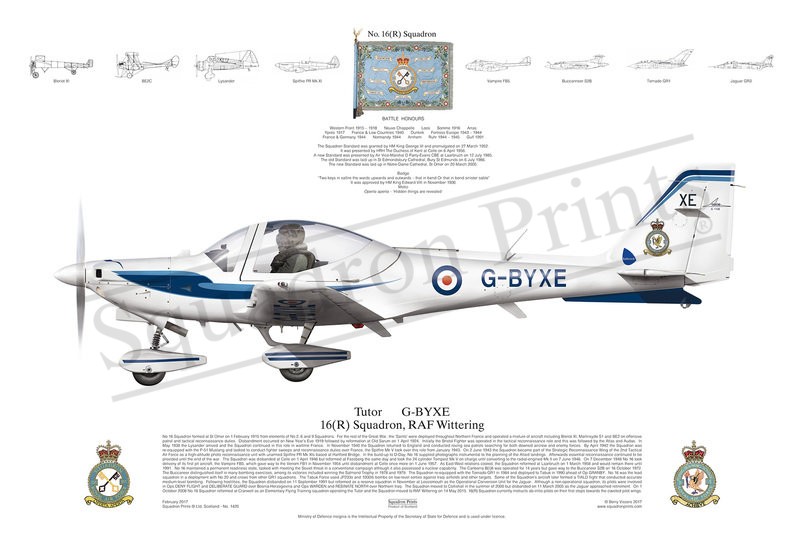 Squadron Prints Lithograph No. 1420 - G-BYXE, Tutor, 16(R) Squadron, RAF Wittering. No 16 Squadron formed at St Omer on 1 February 1915 from elements of No 2, 6 and 9 Squadrons. For the rest of the Great War, the â€˜Saintsâ€™ were deployed throughout Northern France and operated a mixture of aircraft including Bleriot XI, Martinsyde S1 and BE2 on offensive patrol and tactical reconnaissance duties. Disbandment occurred on New Yearâ€™s Eve 1919 followed by reformation at Old Sarum on 1 April 1924. Initially the Bristol Fighter was operated in the tactical reconnaissance role and this was followed by the Atlas and Audax. In May 1938 the Lysander arrived and the Squadron continued in this role in wartime France. In November 1940 the Squadron returned to England and conducted roving sea patrols searching for both downed aircrew and enemy forces. By April 1942 the Squadron was re-equipped with the P-51 Mustang and tasked to conduct fighter sweeps and reconnaissance duties over France, the Spitfire Mk V took over this role from January 1943. On 2 June 1943 the Squadron became part of the Strategic Reconnaissance Wing of the 2nd Tactical Air Force as a high-altitude photo reconnaissance unit with unarmed Spitfire PR Mk XIs based at Hartford Bridge. In the build-up to D-Day, No 16 supplied photographs instrumental to the planning of the Allied landings. Afterwards essential reconnaissance continued to be provided until the end of the war. The Squadron was disbanded at Celle on 1 April 1946 but reformed at Fassberg the same day and took the 24 cylinder Tempest Mk V on charge until converting to the radial-engined Mk II on 7 June 1946. On 7 December 1948 No 16 took delivery of its first jet aircraft, the Vampire FB5, which gave way to the Venom FB1 in November 1954 until disbandment at Celle once more on 1 June 1957. As East-West relations cooled, the Squadron reformed at Laarbruch on 1 March 1958 and would remain there until 1991. No 16 maintained a permanent readiness state, tasked with meeting the Soviet threat in a conventional campaign although it also possessed a nuclear capability. The Canberra B(I)8 was operated for 14 years but gave way to the Buccaneer S2B on 16 October 1972. The Buccaneer distinguished itself in many bombing exercises, among its victories included winning the Salmond Trophy in 1978 and 1979. The Squadron re-equipped with the Tornado GR1 in 1984 and deployed to Tabuk in 1990 ahead of Op GRANBY. No 16 was the lead squadron in a deployment with No 20 and crews from other GR1 squadrons. The Tabuk Force used JP233s and 1000lb bombs on low-level sorties against Iraqi airfields and other targets. Some of the Squadronâ€™s aircraft later formed a TIALD flight that conducted accurate medium-level bombing. Following hostilities, the Squadron disbanded on 11 September 1991 but reformed as a reserve squadron in November at Lossiemouth as the Operational Conversion Unit for the Jaguar. Although a non-operational squadron, its pilots were involved in Ops DENY FLIGHT and DELIBERATE GUARD over Bosnia-Herzegovina and Ops WARDEN and RESINATE NORTH over Northern Iraq. The Squadron moved to Coltishall in the summer of 2000 but disbanded on 11 March 2005 as the Jaguar approached retirement. On 1 October 2008 No 16 Squadron reformed at Cranwell as an Elementary Flying Training squadron operating the Tutor and the Squadron moved to RAF Wittering on 14 May 2015. 16(R) Squadron currently instructs ab-initio pilots on their first steps towards the coveted pilot wings.