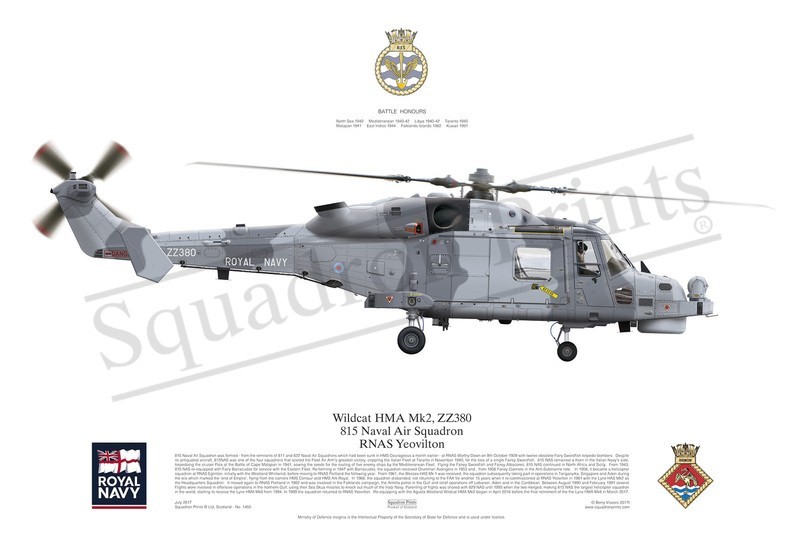 Squadron Prints Lithograph No. 1455 - ZZ380, Wildcat HMA Mk 2, 815 naval Air Squadron. RNAS Yeovilton. 815 Naval Air Squadron was formed - from the remnants of 811 and 822 Naval Air Squadrons which had been sunk in HMS Courageous a month earlier - at RNAS Worthy Down on 9th October 1939 with twelve obsolete Fairy Swordfish torpedo bombers. Despite its antiquated aircraft, 815NAS was one of the four squadrons that scored the Fleet Air Arm's greatest victory, crippling the Italian Fleet at Taranto in November 1940, for the loss of a single Fairey Swordfish. 815 NAS remained a thorn in the Italian Navy's side, torpedoing the cruiser Pola at the Battle of Cape Matapan in 1941, sowing the seeds for the routing of five enemy ships by the Mediterranean Fleet. Flying the Fairey Swordfish and Fairey Albacores, 815 NAS continued in North Africa and Sicily. From 1943, 815 NAS re-equipped with Fairy Barracudas for service with the Eastern Fleet. Re-forming in 1947 with Barracudas, the squadron received Grumman Avengers in 1953 and , from 1956 Fariey Gannets in the Anti-Submarine role. In 1958, it became a helicopter squadron at RNAS Eglinton, initially with the Westland Whirlwind, before moving to RNAS Portland the following year. From 1961, the Wessex HAS Mk 1 was received, the squadron subsequently taking part in operations in Tanganyika, Singapore and Aden during the era which marked the 'end of Empire', flying from the carriers HMS Centaur and HMS Ark Royal. In 1966, the squadron disbanded, not returning to the FAA for another 15 years when it re-commissioned at RNAS Yeovilton in 1981 with the Lynx HAS Mk2 as the Headquarters Squadron. It moved again to RNAS Portland in 1982 and was involved in the Falklands campaign, the Armilla patrol in the Gulf and relief operations off Lebanon, Aden and in the Caribbean. Between August 1990 and February 1991 several Flights were involved in offensive operations in the northern Gulf, using their Sea Skua missiles to knock out much of the Iraqi Navy. Parenting of flights was shared with 829 NAS until 1993 when the two merged, making 815 NAS the largest helicopter squadron in the world, starting to receive the Lynx HMA Mk8 from 1994. In 1999 the squadron returned to RNAS Yeovilton. Re-equipping with the Agusta Westland Wildcat HMA Mk2 began in April 2016 before the final retirement of the the Lynx HMA Mk8 in March 2017.