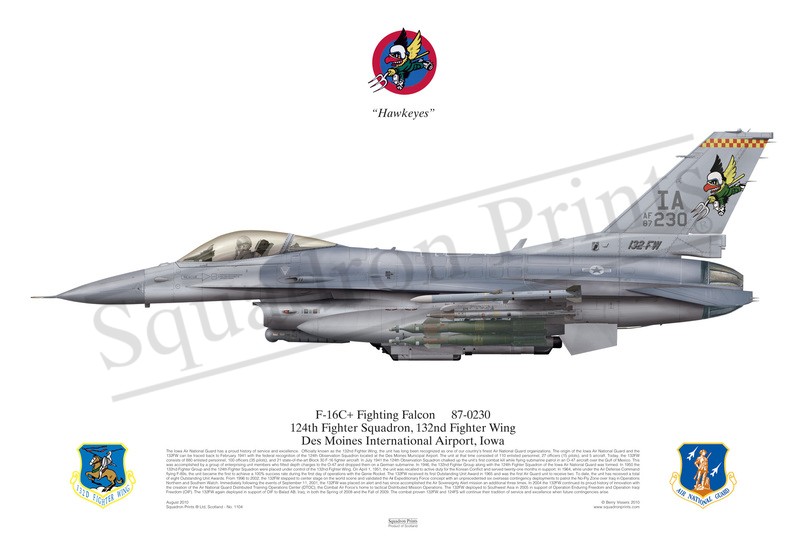 Squadron Prints Lithograph No. 1104 - F-16C+ Fighting Falcon, 87-0230, 124th Fighter Squadron, 132nd Fighter Wing, Des Moines International Airport, Iowa. The Iowa Air National Guard has a proud history of service and excellence. Officially known as the 132nd Fighter Wing, the unit has long been recognized as one of our country’s finest Air National Guard organizations. The origin of the Iowa Air National Guard and the 132FW can be traced back to February 1941 with the federal recognition of the 124th Observation Squadron located at the Des Moines Municipal Airport. The unit at that time consisted of 110 enlisted personnel, 27 officers (15 pilots), and 5 aircraft. Today, the 132FW consists of 880 enlisted personnel, 100 officers (35 pilots), and 21 state-of-the-art Block 30 F-16 fighter aircraft. In July 1941 the 124th Observation Squadron chalked up the unit’s first combat kill while flying submarine patrol in an O-47 aircraft over the Gulf of Mexico. This was accomplished by a group of enterprising unit members who fitted depth charges to the O-47 and dropped them on a German submarine. In 1946, the 132nd Fighter Group along with the 124th Fighter Squadron of the Iowa Air National Guard was formed. In 1950 the 132nd Fighter Group and the 124th Fighter Squadron were placed under control of the 132nd Fighter Wing. On April 1, 1951, the unit was recalled to active duty for the Korean Conflict and served twenty-one months in support. In 1964, while under the Air Defense Command flying F-89s, the unit became the first to achieve a 100% success rate during the first day of operations with the Genie Rocket. The 132FW received its first Outstanding Unit Award in 1965 and was the first Air Guard unit to receive two. To date, the unit has received a total of eight Outstanding Unit Awards. From 1996 to 2002, the 132FW stepped to center stage on the world scene and validated the Air Expeditionary Force concept with an unprecedented six overseas contingency deployments to patrol the No-Fly Zone over Iraq in Operations Northern and Southern Watch. Immediately following the events of September 11, 2001, the 132FW was placed on alert and has since accomplished the Air Sovereignty Alert mission an additional three times. In 2004 the 132FW continued its proud history of innovation with the creation of the Air National Guard Distributed Training Operations Center (DTOC), the Combat Air Force’s home to tactical Distributed Mission Operations. The 132FW deployed to Southwest Asia in 2005 in support of Operation Enduring Freedom and Operation Iraqi Freedom (OIF). The 132FW again deployed in support of OIF to Balad AB, Iraq, in both the Spring of 2008 and the Fall of 2009. The combat proven 132FW and 124FS will continue their tradition of service and excellence when future contingencies arise.