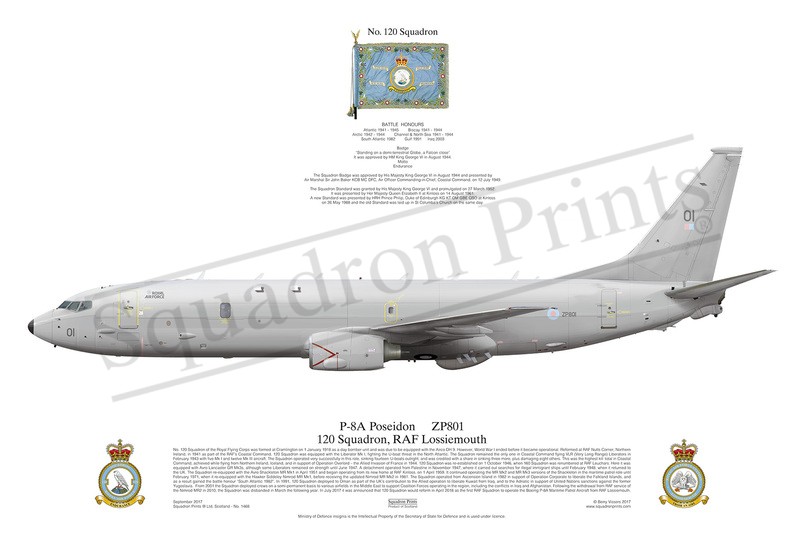 Squadron Prints Lithograph No. 1468 - ZP801, P-8A Poseidon, 120 Squadron, RAF Lossiemouth. No. 120 Squadron of the Royal Flying Corps was formed at Cramlington on 1 January 1918 as a day bomber unit and was due to be equipped with the Airco DH 9. However, World War I ended before it became operational. Reformed at RAF Nutts Corner, Northern Ireland, in 1941 as part of the RAFâ€™s Coastal Command, 120 Squadron was equipped with the Liberator Mk I, fighting the U-boat threat in the North Atlantic. The Squadron remained the only one in Coastal Command flying VLR (Very Long Range) Liberators in February 1943 with five Mk I and twelve Mk III aircraft. The Squadron operated very successfully in this role, sinking fourteen U-boats outright, and was credited with a share in sinking three more, plus damaging eight others. This was the highest kill total in Coastal Command, achieved while flying from Northern Ireland, Iceland, and in support of Operation Overlord â€“ the Allied Invasion of France in 1944. 120 Squadron was re-established on 1 October 1946, when 160 Squadron was renumbered at RAF Leuchars. Here it was equipped with Avro Lancaster GR Mk3s, although some Liberators remained on strength until June 1947. A detachment operated from Palestine in November 1947, where it carried out searches for illegal immigrant ships until February 1948, when it returned to the UK. The Squadron re-equipped with the Avro Shackleton MR Mk1 in April 1951 and began operating from its new home at RAF Kinloss, on 1 April 1959. It continued operating the MR Mk2 and MR Mk3 versions of the Shackleton in the maritime patrol role until February 1971, when it re-equipped with the Hawker Siddeley Nimrod MR Mk1, before receiving the updated Nimrod MR Mk2 in 1981. The Squadron operated from Ascension Island in 1982 in support of Operation Corporate to liberate the Falkland Islands, and as a result gained the battle honour â€œSouth Atlantic 1982â€. In 1991, 120 Squadron deployed to Oman as part of the UKâ€™s contribution to the Allied operation to liberate Kuwait from Iraq, and to the Adriatic in support of United Nations sanctions against the former Yugoslavia. From 2001 the Squadron deployed crews on a semi-permanent basis to various airfields in the Middle East to support Coalition Forces operating in the region, including the conflicts in Iraq and Afghanistan. Following the withdrawal from RAF service of the Nimrod MR2 in 2010, the Squadron was disbanded in March the following year. In July 2017 it was announced that 120 Squadron would reform in April 2018 as the first RAF Squadron to operate the Boeing P-8A Maritime Patrol Aircraft from RAF Lossiemouth.