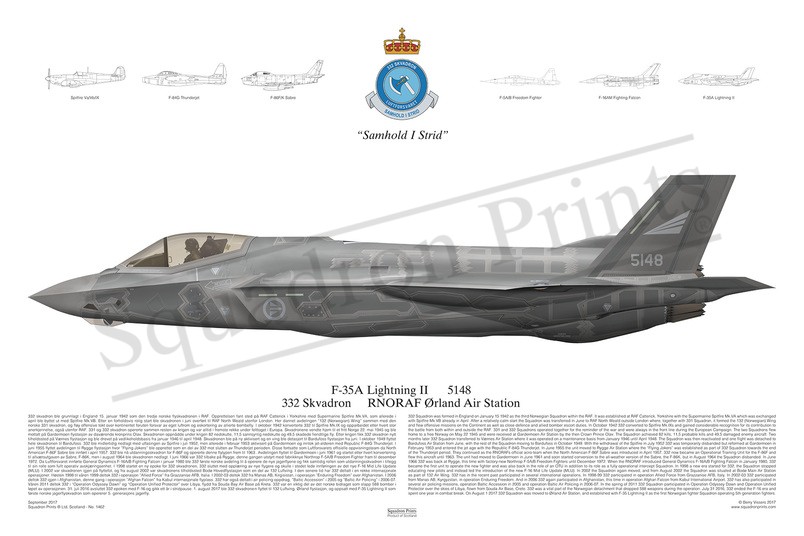 Squadron Prints Lithograph No. 1462 - 5148, F-35A Lightning II, 332 Skvadron, RNORAF Orland Air Station. 332 Squadron was formed in England on January 15 1942 as the third Norwegian Squadron within the RAF. It was established at RAF Catterick, Yorkshire with the Supermarine Spitfire Mk.VA which was exchanged with Spitfire Mk.VB already in April. After a relatively calm start the Squadron was transferred in June to RAF North Weald outside London where, together with 331 Squadron, it formed the 132 (Norwegian) Wing and flew offensive missions on the Continent as well as close defence and allied bomber escort duties. In October 1942 332 converted to Spitfire Mk.IXs and gained considerable recognition for its contribution to the battle from both within and outside the RAF. 331 and 332 Squadrons operated together for the reminder of the war and were always in the front line during the European Campaign. The two Squadrons flew home to a free Norway on May 22 1945 and were received at Gardermoen Air Station by the then Crown Prince Olav. The Squadron achieved 82 kills, 11,5 probable kills and 49,5 damaged enemy aircraft. Two months later 332 Squadron transferred to VÃ¦rnes Air Station where it was operated on a maintenance basis from January 1946 until April 1948. The Squadron was then reactivated and one flight was detached to Bardufoss Air Station from June, with the rest of the Squadron moving to Bardufoss in October 1949. With the withdrawal of the Spitfire in July 1952 332 was temporarily disbanded but reformed at Gardermoen in February 1953 and entered the jet age with the Republic F-84G Thunderjet. In June 1955 the unit moved to Rygge Air Station where the "Flying Jokers" was established as part of 332 Squadron towards the end of the Thunderjet period. They continued as the RNORAFs official acro-team when the North American F-86F Sabre was introduced in April 1957. 332 now became an Operational Training Unit for the F-86F and flew this aircraft until 1963. The unit had moved to Gardermoen in June 1961 and soon started conversion to the all-weather version of the Sabre, the F-86K, but in August 1964 the Squadron disbanded. In June 1966 332 was back at Rygge, this time with factory-new Northrop F-5A/B Freedom Fighters until December 1972. When the RNORAF introduced General Dynamics F-16A/B Fighting Falcon in January 1980, 332 became the first unit to operate the new fighter and was also back in the role of an OTU in addition to its role as a fully operational intercept Squadron. In 1998 a new era started for 332, the Squadron stopped educating new pilots and instead led the introduction of the new F-16 Mid Life Update (MLU). In 2002 the Squadron again moved, and from August 2002 the Squadron was situated at Bodo Main Air Station as part of 132 Air Wing. 332 has in the recent past participated in several international operations. In 1998-99 332 participated in operation Allied Force from Grazzanise AFB, Italy. In 2002-03 332 participated from Manas AB, Kyrgyzstan, in operation Enduring Freedom. And in 2006 332 again participated in Afghanistan, this time in operation Afghan Falcon from Kabul International Airport. 332 has also participated in several air policing missions, operation Baltic Accession in 2005 and operation Baltic Air Policing in 2006-07. In the spring of 2011 332 Squadron participated in Operation Odyssey Dawn and Operation Unified Protector over the skies of Libya, flown from Souda Air Base, Crete. 332 was a vital part of the Norwegian detachment that dropped 588 weapons during the operation. July 31 2016, 332 ended the F-16 era and spent one year in combat break. On August 1 2017 332 Squadron was moved to Orland Air Station, and established with F-35 Lightning II as the first Norwegian fighter Squadron operating 5th generation fighters.