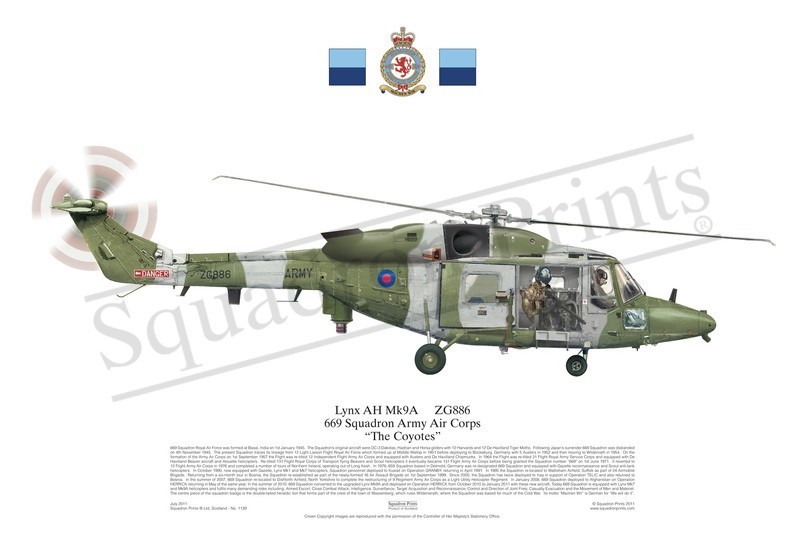 Squadron Prints Lithograph No. 1139 - Lynx AH Mk9A, ZG886, 669 Squadron Army Air Corps, \"The Coyotes\". 669 Squadron Royal Air Force was formed at Basal, India on 1st January 1945. The Squadron’s original aircraft were DC-3 Dakotas, Hadrian and Horsa gliders with 12 Harvards and 12 De Havilland Tiger Moths. Following Japan’s surrender 669 Squadron was disbanded on 4th November 1945. The present Squadron traces its lineage from 12 Light Liaison Flight Royal Air Force which formed up at Middle Wallop in 1951 before deploying to Bückeburg, Germany with 5 Austers in 1952 and then moving to Wildenrath in 1954. On the formation of the Army Air Corps on 1st September 1957 the Flight was re-titled 12 Independent Flight Army Air Corps and equipped with Austers and De Havilland Chipmunks. In 1964 the Flight was re-titled 31 Flight Royal Army Service Corps and equipped with De Havilland Beaver aircraft and Alouette helicopters. Re-titled 131 Flight Royal Corps of Transport flying Beavers and Scout helicopters it eventually became 131 Flight Army Air Corps before being granted the Squadron number “669” on 1st June 1971. It reverted to 12 Flight Army Air Corps in 1976 and completed a number of tours of Northern Ireland, operating out of Long Kesh. In 1978, 659 Squadron based in Detmold, Germany was re-designated 669 Squadron and equipped with Gazelle reconnaissance and Scout anti-tank helicopters. In October 1990, now equipped with Gazelle, Lynx Mk1 and Mk7 helicopters, Squadron personnel deployed to Kuwait on Operation GRANBY, returning in April 1991. In 1995 the Squadron re-located to Wattisham Airfield, Suffolk as part of 24 Airmobile Brigade. Returning from a six-month tour in Bosnia, the Squadron re-established as part of the newly-formed 16 Air Assault Brigade on 1st September 1999. Since 2000, the Squadron has twice deployed to Iraq in support of Operation TELIC and also returned to Bosnia. In the summer of 2007, 669 Squadron re-located to Dishforth Airfield, North Yorkshire to complete the restructuring of 9 Regiment Army Air Corps as a Light Utility Helicopter Regiment. In January 2008, 669 Squadron deployed to Afghanistan on Operation HERRICK returning in May of the same year. In the summer of 2010, 669 Squadron converted to the upgraded Lynx Mk9A and deployed on Operation HERRICK from October 2010 to January 2011 with these new aircraft. Today 669 Squadron is equipped with Lynx Mk7 and Mk9A helicopters and fulfils many demanding roles including: Armed Escort; Close Combat Attack; Intelligence, Surveillance, Target Acquisition and Reconnaissance; Control and Direction of Joint Fires; Casualty Evacuation and the Movement of Men and Materiel. The centre piece of the squadron badge is the double-tailed heraldic lion that forms part of the crest of the town of Wassenberg, which rules Wildenwrath, where the Squadron was based for much of the Cold War. Its motto “Machen Wir” is German for “We will do it”.