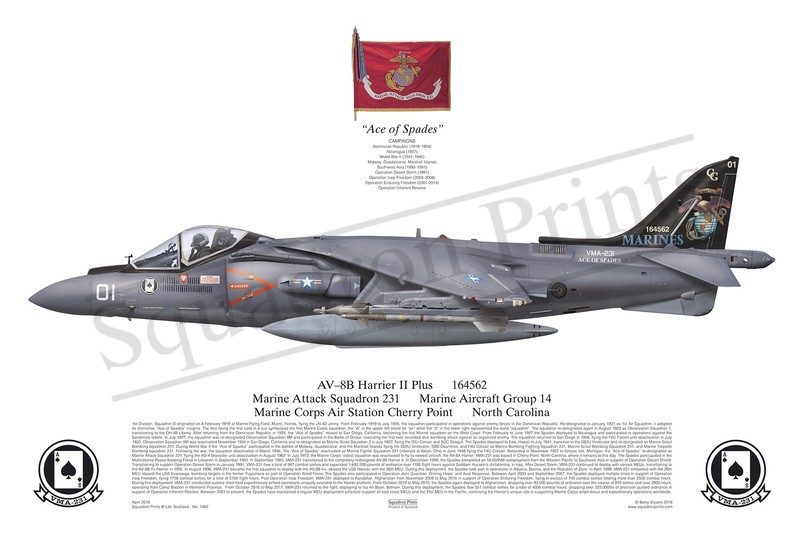 Squadron Prints Lithograph No. 1482 - 164562 '01', AV-8B Harrier II Plus, Marine Attack Squadron 231, Marine Aircraft Group 14, Marine Corps Air Station Cherry Point, North Carolina. 1st Division, Squadron D originated on 8 February 1919 at Marine Flying Field, Miami, Florida, flying the JN-4D Jenny. From February 1919 to July 1924, the squadron participated in operations against enemy forces in the Dominican Republic. Re-designated in January 1921 as 1st Air Squadron, it adopted its distinctive â€œAce of Spadesâ€ insignia. The Ace being the first card in a suit symbolized the first Marine Corps squadron, the â€œAâ€ in the upper left stood for â€œairâ€ while the â€œSâ€ in the lower right represented the word â€œsquadronâ€. The squadron re-designated again in August 1922 as Observation Squadron 1, transitioning to the DH-4B Liberty. After returning from the Dominican Republic in 1924, the â€œAce of Spadesâ€ moved to San Diego, California, becoming the first Marine squadron on the West Coast. From February to June 1927 the Spades deployed to Nicaragua and participated in operations against the Sandinista rebels. In July 1927, the squadron was re-designated Observation Squadron 8M and participated in the Battle of Ocotal, executing the first ever recorded dive bombing attack against an organized enemy. The squadron returned to San Diego in 1928, flying the F8C Falcon until deactivation in July 1933. Observation Squadron 8M was reactivated November 1934 in San Diego, California and re-designated as Marine Scout Squadron 2 in July 1937, flying the 03U Corsair and SOC Seagull. The Spades deployed to Ewa, Hawaii in July 1941, transition to the SB2U Vindicator and re-designated as Marine Scout Bombing Squadron 231. During World War II the â€œAce of Spadesâ€ participated in the battles of Midway, Guadalcanal, and the Marshall Islands flying the SB2U Vindicator, SBD Dauntless, and F4U Corsair as Marine Bombing Fighting Squadron 231, Marine Scout Bombing Squadron 231, and Marine Torpedo Bombing squadron 231. Following the war, the squadron deactivated in March 1946. The â€œAce of Spadesâ€ reactivated as Marine Fighter Squadron 231 (reserve) at Akron, Ohio in June 1948 flying the F4U Corsair. Relocated in November 1957 to Grosse Isle, Michigan, the â€œAce of Spadesâ€ re-designated as Marine Attack Squadron 231, flying the AD-4 Skyraider until deactivation in August 1962. In July 1973, the Marine Corpsâ€™ oldest squadron was reactivated to fly its newest aircraft, the AV-8A Harrier. VMA-231 was based in Cherry Point, North Carolina, where it remains to this day. The Spades participated in the Multinational Peace Keeping Force in Lebanon in September 1983. In September 1985, VMA-231 transitioned to the completely redesigned AV-8B Harrier II. In December 1990, the Spades completed an 18,000NM redeployment from the Western Pacific to Southeast Asia in support of Operation Desert Shield. Transitioning to support Operation Desert Storm in January 1991, VMA-231 flew a total of 987 combat sorties and expended 1,692,000 pounds of ordnance over 1195 flight hours against Saddam Husseinâ€™s dictatorship in Iraq. After Desert Storm, VMA-231 continued to deploy with various MEUs, transitioning to the AV-8B II+ Harrier in 1995. In August 1996, VMA-231 became the first squadron to deploy with the AV-8B II+, aboard the USS Nassau with the 26th MEU. During this deployment, the Spades took part in operations in Albania, Bosnia, and the Republic of Zaire. In April 1999, VMA-231 embarked with the 26th MEU aboard the USS Kearsarge, bombing targets in the former Yugoslavia as part of Operation Allied Force. The Spades also participated in Operation Joint Guardian, Shining Hope, and Avid Response. Between April 2003 and September 2007, the Spades deployed multiple times in support of Operation Iraqi Freedom, flying 1738 combat sorties for a total of 5158 flight hours. Post Operation Iraqi Freedom, VMA-231 deployed to Kandahar, Afghanistan from November 2009 to May 2010 in support of Operation Enduring Freedom, flying in excess of 700 combat sorties totaling more than 2500 combat hours. During this deployment, VMA-231 conducted austere short-field expeditionary airfield operations uniquely available to the Harrier platform. From October 2012 to May 2013, the Spades again deployed to Afghanistan, dropping over 93,000 pounds of ordnance over the course of 810 sorties and over 2900 hours, operating from Camp Bastion in Helmand Province. From October 2016 to May 2017, VMA-231 returned to the fight, deploying to Isa Air Base, Bahrain. During this deployment, the Spades flew 551 combat sorties for a total of 4056 combat hours, dropping over 323,000lbs of precision guided ordnance in support of Operation Inherent Resolve. Between 2001 to present, the Spades have maintained a regular MEU deployment schedule support all east coast MEUs and the 31st MEU in the Pacific, continuing the Harrierâ€™s unique role in supporting Marine Corps amphibious and expeditionary operations worldwide.