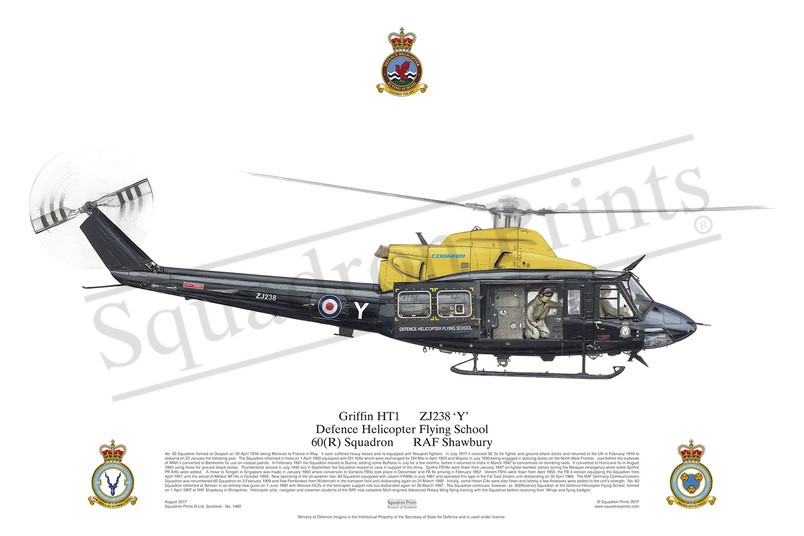 Squadron Prints Lithograph No. 1460 - Griffin HT1, ZJ238 'Y', Defence Helicopter Flying School, 60(R) Squadron, RAF Shawbury. No. 60 Squadron formed at Gosport on 30 April 1916 taking Moranes to France in May. It soon suffered heavy losses and re-equipped with Nieuport fighters. In July 1917 it received SE 5s for fighter and ground-attack duties and returned to the UK in February 1919 to disband on 22 January the following year. The Squadron reformed in India on 1 April 1920 equipped with DH 10As which were exchanged for DH 9As in April 1923 and Wapitis in July 1930 being engaged in policing duties on the North West Frontier. Just before the outbreak of WWII it converted to Blenheims for use on coastal patrols. In February 1941 the Squadron moved to Burma, adding some Buffalos in July for a few months, before it returned to India in March 1942 to concentrate on bombing raids. It converted to Hurricane IIs in August 1943 using these for ground attack duties. Thunderbolts arrived in July 1945 but in September the Squadron moved to Java in support of the Army. Spitfire FB18s were flown from January 1947 on fighter-bomber sorties during the Malayan emergency when some Spitfire PR XIXs were added. A move to Tengah in Singapore was made in January 1950 where conversion to Vampire FB5s took place in December and FB 9s arriving in February 1952. Venom FB1s were flown from April 1955, the FB 4 version equipping the Squadron from April 1957 until the arrival of Meteor NF14s in October 1959. Now operating in the all-weather role, 60 Squadron equipped with Javelin FAW9s in July 1961 and operated this type in the Far East theatre until disbanding on 30 April 1968. The RAF Germany Communications Squadron was renumbered 60 Squadron on 3 February 1969 and flew Pembrokes from Wildenrath in the transport field until disbanding again on 31 March 1992. Initially, some Heron C4s were also flown and latterly a few Andovers were added to the unitâ€™s strength. No. 60 Squadron reformed at Benson in an entirely new guise on 1 June 1992 with Wessex HC2s in the helicopter support role but disbanded again on 26 March 1997. The Squadron continues, however, as 60(Reserve) Squadron at the Defence Helicopter Flying School, formed on 1 April 1997 at RAF Shawbury in Shropshire. Helicopter pilot, navigator and crewmen students of the RAF now complete Multi-engined Advanced Rotary Wing flying training with the Squadron before receiving their 'Wings and flying badges'.