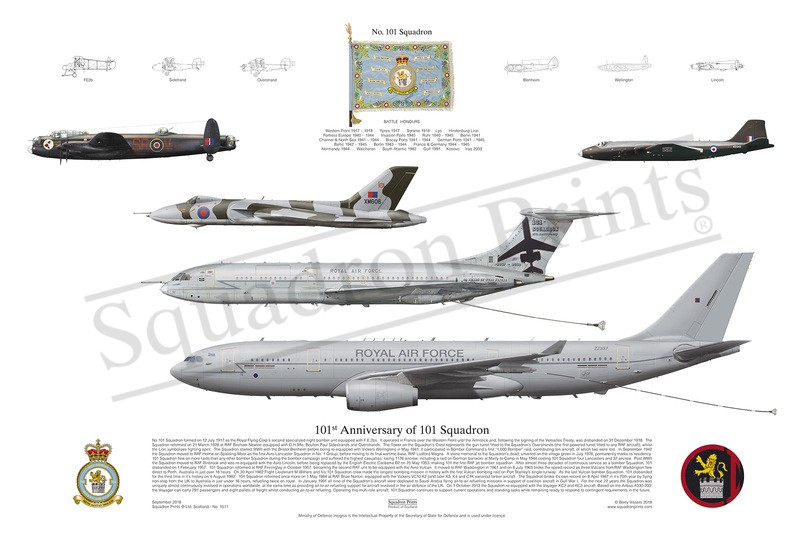 Squadron Prints Lithograph No. 1511 - 101th Anniversary of 101 Squadron. No.101 Squadron formed on 12 July 1917 as the Royal Flying Corpâ€™s second specialized night bomber unit equipped with F.E.2bs. It operated in France over the Western Front until the Armistice and, following the signing of the Versailles Treaty, was disbanded on 31 December 1918. The Squadron reformed on 21 March 1928 at RAF Bircham Newton equipped with D.H.9As, Boulton Paul Sidestrands and Overstrands. The Tower on the Squadronâ€™s Crest represents the gun turret fitted to the Squadronâ€™s Overstrands (the first powered turret fitted to any RAF aircraft), whilst the Lion symbolizes fighting spirit. The Squadron started WWII with the Bristol Blenheim before being re-equipped with Vickers Wellingtons in May 1941. It participated in Bomber Commandâ€™s first â€œ1,000 Bomberâ€ raid, contributing ten aircraft, of which two were lost. In September 1942 the Squadron moved to RAF Holme-on-Spalding-Moor as the first Avro Lancaster Squadron in No. 1 Group, before moving to its final wartime base, RAF Ludford Magna. A stone memorial to the Squadronâ€™s dead, unveiled on the village green in July 1978, permanently marks its residency. 101 Squadron flew on more raids than any other bomber Squadron during the bomber campaign and suffered the highest casualties, losing 1176 aircrew; including a raid on German barracks at Mailly-le-Camp in May 1944 costing 101 Squadron four Lancasters and 32 aircrew. Post WWII the Squadron moved to RAF Binbrook and was re-equipped with the Avro Lincoln, before being replaced by the English Electric Canberra B2 on 25 May 1953, making 101 the first RAF jet bomber squadron. After almost three decades of continuous service as a bomber Squadron, 101 disbanded on 1 February 1957. 101 Squadron reformed at RAF Finningley in October 1957, becoming the second RAF unit to be equipped with the Avro Vulcan. It moved to RAF Waddington in 1961 and on 8 July 1963 broke the speed record as three Vulcans from RAF Waddington flew direct to Perth, Australia in just over 18 hours. On 30 April 1982 Flight Lieutenant M Withers and his 101 Squadron crew made the longest bombing mission in history with the first Vulcan bombing raid on Port Stanleyâ€™s single runway. As the last Vulcan bomber Squadron, 101 disbanded for the third time in itâ€™s history on 4 August 1982. 101 Squadron reformed once more on 1 May 1984 at RAF Brize Norton, equipped with the Vickers VC10 K2 (and later K3, K4 and C1K variants) tanker aircraft. The Squadron broke itâ€™s own record on 8 April 1987 in itâ€™s 70th year by flying non-stop from the UK to Australia in just under 16 hours, refuelling twice en route. In January 1991 all nine of the Squadronâ€™s aircraft were deployed to Saudi Arabia flying air-to-air refuelling missions in support of coalition aircraft in Gulf War I. For the next 22 years the Squadron was uniquely almost continuously involved in operations worldwide, at the same time as providing air-to-air refuelling support for aircraft involved in the air defence of the UK. On 1 October 2013 the Squadron re-equipped with the Voyager KC2 and KC3 aircraft. Based on the Airbus A330-200, the Voyager can carry 291 passengers and eight pallets of freight whilst conducting air-to-air refueling. Operating this multi-role aircraft, 101 Squadron continues to support current operations and standing tasks while remaining ready to respond to contingent requirements in the future.