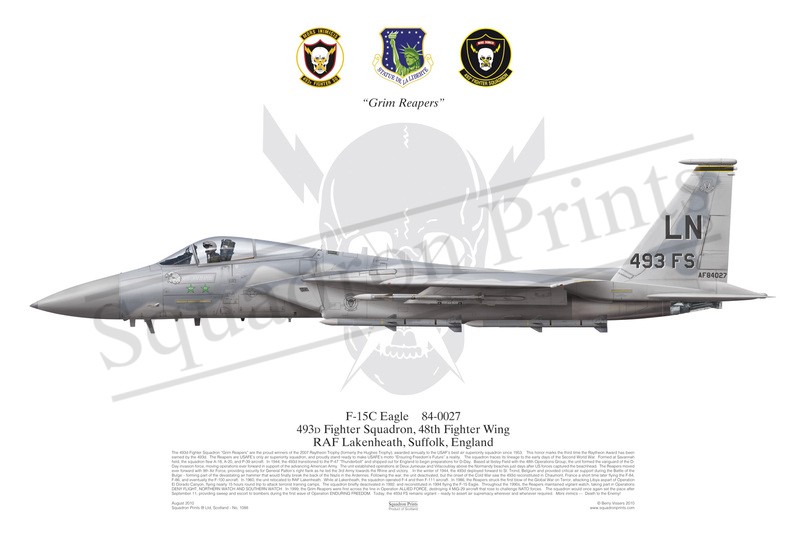 Squadron Prints Lithograph No. 1088CU - 84-0027, F-15C Eagle, 493rd Fighter Squadron, 48th Fighter Wing, RAF Lakenheath, Suffolk, England. The 493d Fighter Squadron â€œGrim Reapersâ€ are the proud winners of the 2007 Raytheon Trophy (formerly the Hughes Trophy), awarded annually to the USAFâ€™s best air superiority squadron since 1953. This honor marks the third time the Raytheon Award has been earned by the 493d. The Reapers are USAFEâ€™s only air superiority squadron, and proudly stand ready to make USAFEâ€™s motto â€œEnsuring Freedomâ€™s Futureâ€ a reality. The squadron traces its lineage to the early days of the Second World War. Formed at Savannah field, the squadron flew A-18, A-20, and P-39 aircraft. In 1944, the 493d transitioned to the P-47 â€œThunderboltâ€ and shipped out for England to begin preparations for D-Day. Based at Ibsley Field with the 48th Operations Group, the unit formed the vanguard of the D-Day invasion force, moving operations ever forward in support of the advancing American Army. The unit established operations at Deux Jumeuax and Villacoublay above the Normandy beaches just days after US forces captured the beachhead. The Reapers moved ever forward with 9th Air Force, providing security for General Pattonâ€™s right flank as he led the 3rd Army towards the Rhine and victory. In the winter of 1944, the 493d deployed forward to St. Trond, Belgium and provided critical air support during the Battle of the Bulge â€“ forming part of the devastating air hammer that would finally break the back of the Nazis in the Ardennes. Following the war, the unit deactivated, but the onset of the Cold War saw the 493d reconstituted in Chaumont, France a short time later flying the F-84, F-86, and eventually the F-100 aircraft. In 1960, the unit relocated to RAF Lakenheath. While at Lakenheath, the squadron operated F-4 and then F-111 aircraft. In 1986, the Reapers struck the first blow of the Global War on Terror, attacking Libya as part of Operation El Dorado Canyon, flying nearly 15 hours round trip to attack terrorist training camps. The squadron briefly deactivated in 1992, and reconstituted in 1994 flying the F-15 Eagle. Throughout the 1990s, the Reapers maintained vigilant watch, taking part in Operations DENY FLIGHT, NORTHERN WATCH AND SOUTHERN WATCH. In 1999, the Grim Reapers were first across the line in Operation ALLIED FORCE, destroying 4 MiG-29 aircraft that rose to challenge NATO forces. The squadron would once again set the pace after September 11, providing sweep and escort to bombers during the first wave of Operation ENDURING FREEDOM. Today, the 493d FS remains vigilant â€“ ready to assert air supremacy wherever and whenever required. Mors inimics â€“â€“ Death to the Enemy!