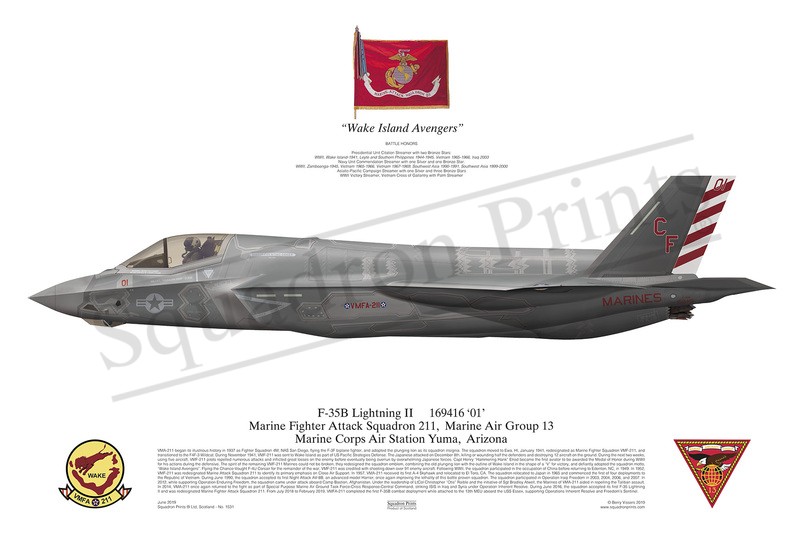 Squadron Prints Lithograph No. 1531 - 169416 '01', F-35B Lightning II, Marine Fighter Attack Squadron 211, Marine Air Group 13, Marine Corps Air Station Yuma, Arizona. VMA-211 began its illustrious history in 1937 as Fighter Squadron 4M, NAS San Diego, flying the F-3F biplane fighter, and adopted the plunging lion as its squadron insignia. The squadron moved to Ewa, HI, January 1941, redesignated as Marine Fighter Squadron VMF-211, and transitioned to the F4F-3 Wildcat. During November 1941, VMF-211 was sent to Wake Island as part of US Pacific Strategies Defense. The Japanese attacked on December 8th, killing or wounding half the defenders and destroying 12 aircraft on the ground. During the next two weeks, using five aircraft, VMF-211 pilots repelled numerous attacks and inflicted great losses on the enemy before eventually being overrun by overwhelming Japanese forces. Capt Henry â€œHammering Hankâ€ Elrod became the first aviator to be awarded the Medal of Honor during WWII for his actions during the defensive. The spirit of the remaining VMF-211 Marines could not be broken; they redesigned the squadron emblem, combining the old plunging lion with the outline of Wake Island in the shape of a â€œVâ€ for victory, and defiantly adopted the squadron motto, â€œWake Island Avengersâ€. Flying the Chance-Vought F-4U Corsair for the remainder of the war, VMF-211 was credited with shooting down over 91 enemy aircraft. Following WWII, the squadron participated in the occupation of China before returning to Edenton, NC, in 1949. In 1952, VMF-211 was redesignated Marine Attack Squadron 211 to identify its primary emphasis on Close Air Support. In 1957, VMA-211 received its first A-4 Skyhawk and relocated to El Toro, CA. The squadron relocated to Japan in 1965 and commenced the first of four deployments to the Republic of Vietnam. During June 1990, the squadron accepted its first Night Attack AV-8B, an advanced model Harrier, once again improving the lethality of this battle proven squadron. The squadron participated in Operation Iraqi Freedom in 2003, 2004, 2006, and 2007. In 2012, while supporting Operation Enduring Freedom, the squadron came under attack aboard Camp Bastion, Afghanistan. Under the leadership of LtCol Christopher â€œOtisâ€ Raible and the initiative of Sgt Bradley Atwell, the Marines of VMA-211 aided in repelling the Taliban assault. In 2014, VMA-211 once again returned to the fight as part of Special Purpose Marine Air Ground Task Force-Crisis Response-Central Command, striking ISIS in Iraq and Syria under Operation Inherent Resolve. During June 2016, the squadron accepted its first F-35 Lightning II and was redesignated Marine Fighter Attack Squadron 211. From July 2018 to February 2019, VMFA-211 completed the first F-35B combat deployment while attached to the 13th MEU aboard the USS Essex, supporting Operations Inherent Resolve and Freedomâ€™s Sentinel.