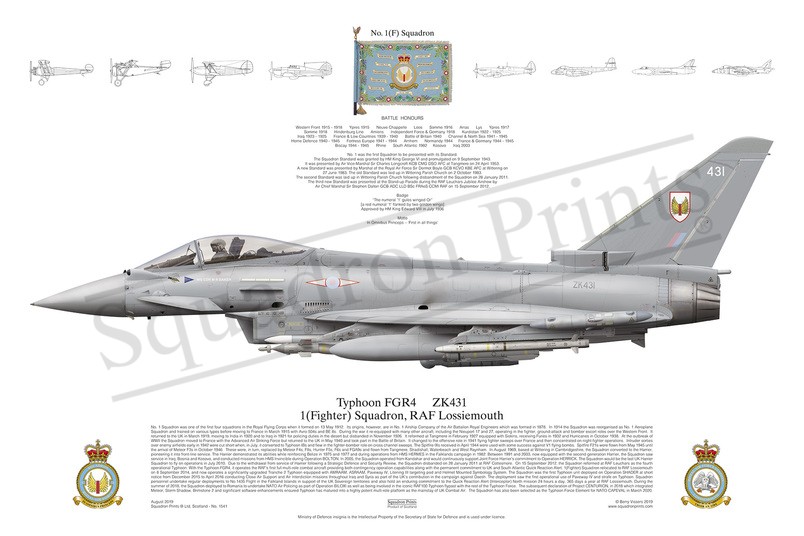 Squadron Prints Lithograph No 1541 - ZK431, Typhoon FGR4, 1(F) Squadron, RAF Lossiemouth. No. 1 Squadron was one of the first four squadrons in the Royal Flying Corps when it formed on 13 May 1912. Its origins, however, are in No. 1 Airship Company of the Air Battalion Royal Engineers which was formed in 1878. In 1914 the Squadron was reorganised as No. 1 Aeroplane Squadron and trained on various types before moving to France in March 1915 with Avro 504s and BE 8s. During the war it re-equipped with many other aircraft, including the Nieuport 17 and 27, operating in the fighter, ground-attack and bomber escort roles over the Western Front. It returned to the UK in March 1919, moving to India in 1920 and to Iraq in 1921 for policing duties in the desert but disbanded in November 1926. It reformed at Tangmere in February 1927 equipped with Siskins, receiving Furies in 1932 and Hurricanes in October 1938. At the outbreak of WWII the Squadron moved to France with the Advanced Air Striking Force but returned to the UK in May 1940 and took part in the Battle of Britain. It changed to the offensive role in 1941 flying fighter sweeps over France and then concentrated on night-fighter operations. Intruder sorties over enemy airfields early in 1942 were cut short when, in July, it converted to Typhoon IBs and flew in the fighter-bomber role on cross channel sweeps. The Spitfire IXs received in April 1944 were used with some success against V1 flying bombs. Spitfire F21s were flown from May 1945 until the arrival of Meteor F3s in October 1946. These were, in turn, replaced by Meteor F4s, F8s, Hunter F5s, F6s and FGA9s and flown from Tangmere, Stradishall, Waterbeach and West Raynham. In August 1969, based at Wittering in Cambridgeshire, the Squadron converted to the Harrier, pioneering it into front-line service. The Harrier demonstrated its abilities while reinforcing Belize in 1975 and 1977 and during operations from HMS HERMES in the Falklands campaign in 1982. Between 1991 and 2003, now equipped with the second generation Harrier, the Squadron saw service in Iraq, Bosnia and Kosovo, and conducted missions from HMS Invincible during Operation BOLTON. In 2005, the Squadron operated from Kandahar and would continuously support Joint Force Harrier's commitment to Operation HERRICK. The Squadron would be the last UK Harrier Squadron to fly on operations in July 2010. Due to the withdrawal from service of Harrier following a Strategic Defence and Security Review, the Squadron disbanded on 28 January 2011 at RAF Cottesmore. On 15 September 2012, the Squadron reformed at RAF Leuchars as the fourth operational Typhoon. With the Typhoon FGR4, it operates the RAFâ€™s first full multi-role combat aircraft providing both contingency operation capabilities along with the permanent commitment to UK and South Atlantic Quick Reaction Alert. 1(Fighter) Squadron relocated to RAF Lossiemouth on 8 September 2014, and now operates a significantly upgraded Tranche 2 Typhoon equipped with AMRAAM, ASRAAM, Paveway IV, Litening III targeting pod and Helmet Mounted Symbology System. The Squadron was the first Typhoon unit deployed on Operation SHADER at short notice from December 2015 to April 2016 conducting Close Air Support and Air Interdiction missions throughout Iraq and Syria as part of the UK's contribution in the campaign against Daesh. The deployment saw the first operational use of Paveway IV and strafe on Typhoon. Squadron personnel undertake regular deployments to No.1435 Flight in the Falkland Islands in support of the UK Sovereign territories and also hold an enduring commitment to the Quick Reaction Alert (Interceptor) North mission 24 hours a day, 365 days a year at RAF Lossiemouth. During the summer of 2018, the Squadron deployed to Romania to undertake NATO Air Policing as part of Operation BILOXI as well as being involved in the iconic RAF100 Typhoon flypast with the rest of the Typhoon Force. The subsequent declaration of Project CENTURION, in 2018 which integrated Meteor, Storm Shadow, Brimstone 2 and significant software enhancements ensured Typhoon has matured into a highly potent multi-role platform as the mainstay of UK Combat Air. The Squadron has also been selected as the Typhoon Force Element for NATO CAPEVAL in March 2020.