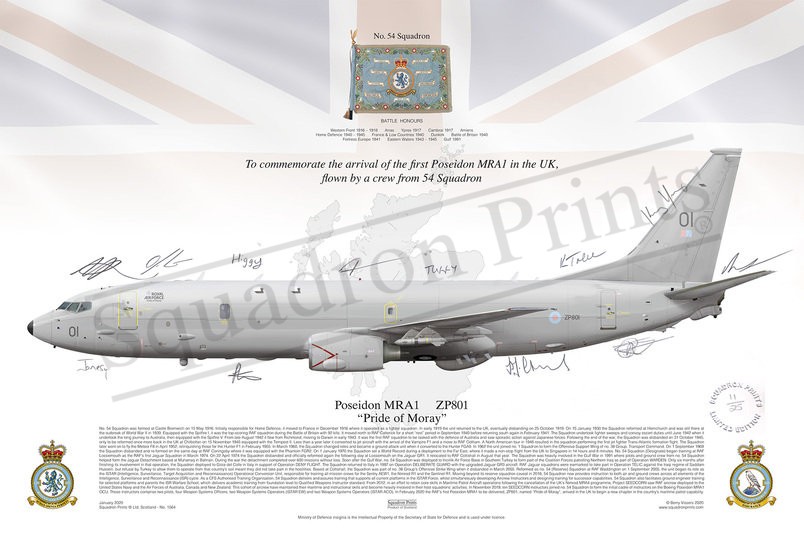 Squadron Prints Lithograph No 1564 - ZP801 "Pride of Moray", Poseidon MRA1. To commemorate the arrival of the first Poseidon MRA1 in the UK, flown by a crew from 54 Squadron. Signed in pencil by the 12 crew members that flew on board the aircraft on the delivery flight from Jacksonville to the United Kingdom.

Prints may be scuffed or scratched as they have been handled and signed in the Squadron Crew room.

No. 54 Squadron was formed at Castle Bromwich on 15 May 1916. Initially responsible for Home Defence, it moved to France in December 1916 where it operated as a fighter squadron. In early 1919 the unit returned to the UK, eventually disbanding on 25 October 1919. On 15 January 1930 the Squadron reformed at Hornchurch and was still there at the outbreak of World War II in 1939. Equipped with the Spitfire I, it was the top-scoring RAF squadron during the Battle of Britain with 92 kills. It moved north to RAF Catterick for a short “rest” period in September 1940 before returning south again in February 1941. The Squadron undertook fighter sweeps and convoy escort duties until June 1942 when it undertook the long journey to Australia, then equipped with the Spitfire V. From late August 1942 it flew from Richmond, moving to Darwin in early 1943. It was the first RAF squadron to be tasked with the defence of Australia and saw sporadic action against Japanese forces. Following the end of the war, the Squadron was disbanded on 31 October 1945, only to be reformed once more back in the UK at Chilbolton on 15 November 1945 equipped with the Tempest II. Less than a year later it converted to jet aircraft with the arrival of the Vampire F1 and a move to RAF Odiham. A North American tour in 1948 resulted in the squadron performing the first jet fighter Trans-Atlantic formation flight. The Squadron later went on to fly the Meteor F8 in April 1952, relinquishing those for the Hunter F1 in February 1955. In March 1960, the Squadron changed roles and became a ground attack unit when it converted to the Hunter FGA9. In 1962 the unit joined no. 1 Squadron to form the Offensive Support Wing of no. 38 Group, Transport Command. On 1 September 1969 the Squadron disbanded and re-formed on the same day at RAF Coningsby where it was equipped with the Phantom FGR2. On 1 January 1970 the Squadron set a World Record during a deployment to the Far East, where it made a non-stop flight from the UK to Singapore in 14 hours and 8 minutes. No. 54 Squadron (Designate) began training at RAF Lossiemouth as the RAF’s first Jaguar Squadron in March 1974. On 22 April 1974 the Squadron disbanded and officially reformed again the following day at Lossiemouth on the Jaguar GR1. It relocated to RAF Coltishall in August that year. The Squadron was heavily involved in the Gulf War in 1991 where pilots and ground crew from no. 54 Squadron helped form the Jaguar Detachment based at Muharraq in Bahrain. During the war the detachment completed over 600 missions without loss. Soon after the Gulf War, no. 54 Squadron was deployed to Incirlik Air Force Base in Southern Turkey to form part of the Coalition Forces patrolling Northern Iraq as part of Operation WARDEN. Only six months after finishing its involvement in that operation, the Squadron deployed to Gioia del Colle in Italy in support of Operation DENY FLIGHT. The Squadron returned to Italy in 1997 on Operation DELIBERATE GUARD with the upgraded Jaguar GR3 aircraft. RAF Jaguar squadrons were earmarked to take part in Operation TELIC against the Iraqi regime of Saddam Hussein, but refusal by Turkey to allow them to operate from that country’s soil meant they did not take part in the hostilities. Based at Coltishall, the Squadron was part of no. 38 Group’s Offensive Strike Wing when it disbanded in March 2005. Reformed as no. 54 (Reserve) Squadron at RAF Waddington on 1 September 2005, the unit began its role as the ISTAR (Intelligence, Surveillance, Target Acquisition and Reconnaissance) Operational Conversion Unit, responsible for training all mission crews for the Sentry AEW1, the Nimrod R1 and the Sentinel R1. Moving beyond its reserve squadron caveat in 2018, 54 Squadron now provides instruction to both air and ground crews across all elements of the Intelligence, Surveillance and Reconnaissance (ISR) cycle. As a CFS Authorised Training Organisation, 54 Squadron delivers and assures training that supports all current platforms in the ISTAR Force, whilst simultaneously developing Aircrew Instructors and designing training for successor capabilities. 54 Squadron also facilitates ground engineer training for selected platforms and parents the ISR Warfare School, which delivers academic training from foundation level to Qualified Weapons Instructor standard. From 2012, in an effort to retain core skills in Maritime Patrol Aircraft operations following the cancellation of the UK’s Nimrod MRA4 programme, Project SEEDCORN saw RAF aircrew deployed to the United States Navy and the Air Forces of Australia, Canada and New Zealand. This cohort of aircrew have maintained their maritime and instructional skills and become heavily involved in their host squadrons’ activities. In November 2019, ten SEEDCORN instructors joined no. 54 Squadron to form the initial cadre of instructors on the Boeing Poseidon MRA1 OCU. These instructors comprise two pilots, four Weapon Systems Officers, two Weapon Systems Operators (ISTAR EW) and two Weapon Systems Operators (ISTAR ACO). In February 2020 the RAF’s first Poseidon MRA1 to be delivered, ZP801, named “Pride of Moray”, arrived in the UK to begin a new chapter in the country’s maritime patrol capability.