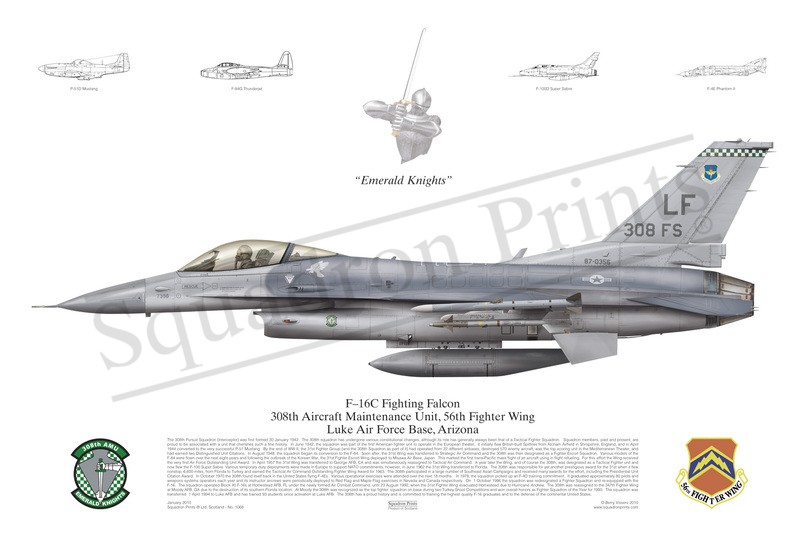 Squadron Prints Lithograph No. 1068 - F-16C Fighting Falcon, 308th Aircraft Maintenance Unit, 56th Fighter Wing, Luke Air Force Base, Arizona. The 308th Pursuit Squadron (Interceptor) was first formed 30 January 1942. The 308th squadron has undergone various constitutional changes, although its role has generally always been that of a Tactical Fighter Squadron. Squadron members, past and present, are proud to be associated with a unit that cherishes such a fine history. In June 1942, the squadron was part of the first American fighter unit to operate in the European theater. It initially flew British-built Spitfires from Atcham Airfield in Shropshire, England, and in April 1944 converted to the very successful P-51 Mustang. By the end of WW II, the 31st Fighter Group (and the 308th Squadron as part of it) had operated from 22 different airbases, destroyed 570 enemy aircraft, was the top scoring unit in the Mediterranean Theater, and had earned two Distinguished Unit Citations. In August 1948, the squadron began its conversion to the F-84. Soon after, the 31st Wing was transferred to Strategic Air Command and the 308th was then designated as a Fighter Escort Squadron. Various models of the F-84 were flown over the next eight years and following the outbreak of the Korean War, the 31st Fighter Escort Wing deployed to Misawa Air Base, Japan. This marked the first trans-Pacific mass flight of jet aircraft using in flight refueling. For this effort the Wing received the very first Air Force Outstanding Unit Award. In April 1957 the 31st Wing was transferred to George AFB, CA and was simultaneously reassigned to Tactical Air Command. A year later the Wing, and of course the 308th, was designated as a Tactical Fighter unit and now flew the F-100 Super Sabre. Various temporary duty deployments were made in Europe to support NATO commitments, however, in June 1962 the 31st Wing transferred to Florida. The 308th was responsible for yet another prestigious award for the 31st when it flew nonstop, 6,600 miles, from Florida to Turkey and earned the Tactical Air Command Outstanding Fighter Wing Award for 1963. The 308th participated in a large number of Southeast Asian Campaigns and received many awards for the effort, including the Presidential Unit Citation Award. In October 1970 the 308th found itself back in the United States flying F-4Es. Various operational exercises were attended over the next 18 months. In 1978, the squadron picked up an F-4D training commitment. It graduated approximately 80 pilots and weapons systems operators each year and its instructor aircrews were periodically deployed to Red Flag and Maple Flag exercises in Nevada and Canada respectively. On 1 October 1986 the squadron was redesignated a Fighter Squadron and re-equipped with the F-16. The squadron operated Block 40 F-16s at Homestead AFB, FL under the newly formed Air Combat Command, until 23 August 1992, when the 31st Fighter Wing evacuated Homestead due to Hurricane Andrew. The 308th was reassigned to the 347th Fighter Wing at Moody AFB, GA due to the destruction of its southern Florida location. At Moody the 308th was recognized as the top fighter squadron on base during two Turkey Shoot Competitions and won overall honors as Fighter Squadron of the Year for 1993. The squadron was transferred 1 April 1994 to Luke AFB and has trained 93 students since activation at Luke AFB. The 308th has a proud history and is committed to training the highest quality F-16 graduates and to the defense of the continental United States.