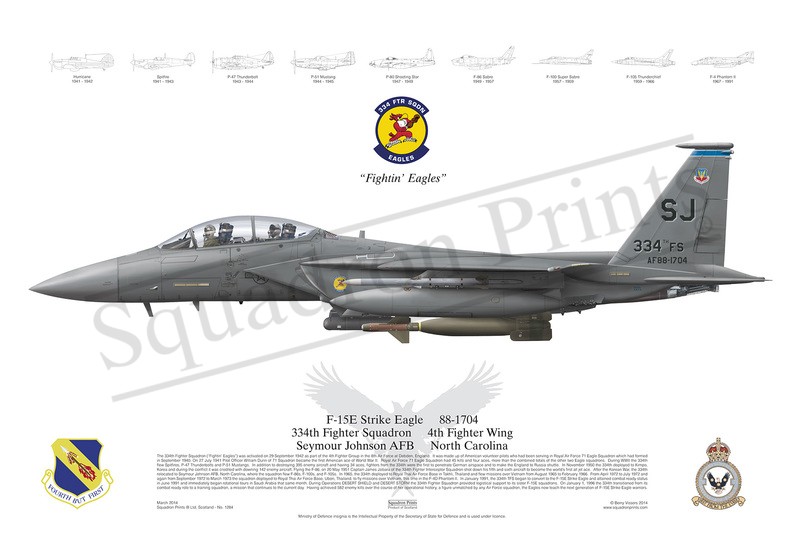 Squadron Prints Lithograph No. 1284 - F-15E Strike Eagle, 88-1704, 334th Fighter Squadron, 4th Fighter Wing, Seymour Johnson AFB, North Carolina. The 334th Fighter Squadron (“Fightin’ Eagles”) was activated on 29 September 1942 as part of the 4th Fighter Group in the 8th Air Force at Debden, England. It was made up of American volunteer pilots who had been serving in Royal Air Force 71 Eagle Squadron which had formed in September 1940. On 27 July 1941 Pilot Officer William Dunn of 71 Squadron became the first American ace of World War II. Royal Air Force 71 Eagle Squadron had 45 kills and four aces, more than the combined totals of the other two Eagle squadrons. During WWII the 334th flew Spitfires, P-47 Thunderbolts and P-51 Mustangs. In addition to destroying 395 enemy aircraft and having 34 aces, fighters from the 334th were the first to penetrate German airspace and to make the England to Russia shuttle. In November 1950 the 334th deployed to Kimpo, Korea and during the conflict it was credited with downing 142 enemy aircraft. Flying the F-86, on 20 May 1951 Captain James Jabara of the 334th Fighter Interceptor Squadron shot down his fifth and sixth aircraft to become the world’s first all jet ace. After the Korean War, the 334th relocated to Seymour Johnson AFB, North Carolina, where the squadron flew F-86s, F-100s, and F-105s. In 1965, the 334th deployed to Royal Thai Air Force Base in Takhli, Thailand and flew missions over Vietnam from August 1965 to February 1966. From April 1972 to July 1972 and again from September 1972 to March 1973 the squadron deployed to Royal Thai Air Force Base, Ubon, Thailand, to fly missions over Vietnam, this time in the F-4D Phantom II. In January 1991, the 334th TFS began to convert to the F-15E Strike Eagle and attained combat ready status in June 1991 and immediately began rotational tours in Saudi Arabia that same month. During Operations DESERT SHIELD and DESERT STORM the 334th Fighter Squadron provided logistical support to its sister F-15E squadrons. On January 1, 1996 the 334th transitioned from its combat ready role to a training squadron, a mission that continues to the current day. Having achieved 582 enemy kills over the course of her operational history, a figure unmatched by any Air Force squadron, the Eagles now teach the next generation of F-15E Strike Eagle warriors.