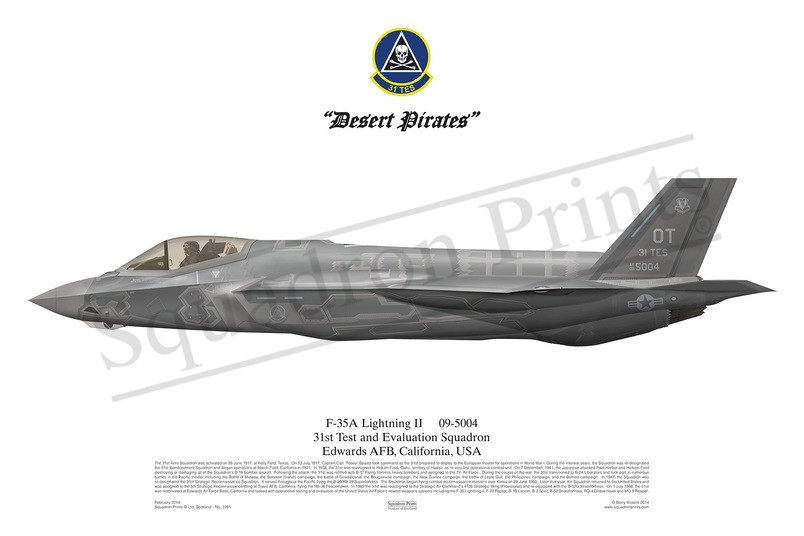 Squadron Prints Lithograph No. 1281CU - F-35A Lighting II, 09-5004, 31 Test and Evaluation Squadron "Desert Pirates", Edwards AFB, California. The 31st Aero Squadron was activated on 26 June 1917, at Kelly Field, Texas. On 13 July 1917, Captain Carl “Tooey” Spaatz took command as the 31st prepared to deploy to the European theater for operations in World War I. During the interwar years, the Squadron was re-designated the 31st Bombardment Squadron and began operations at March Field, California in 1931. In 1938, the 31st was reassigned to Hickam Field, Oahu, territory of Hawaii, as its very first operational combat unit. On 7 December, 1941, the Japanese attacked Pearl Harbor and Hickam Field destroying or damaging all of the Squadron’s B-18 bomber aircraft. Following the attack, the 31st was refitted with B-17 Flying Fortress heavy bombers and assigned to the 7th Air Force. During the course of the war, the 31st transitioned to B-24 Liberators and took part in numerous battles in the Pacific theater including the Battle of Midway, the Solomon Islands campaign, the battle of Guadalcanal, the Bougainville campaign, the New Guinea campaign, the battle of Leyte Gulf, the Philippines campaign, and the Borneo campaign. In 1947, the Squadron was re-designated the 31st Strategic Reconnaissance Squadron. It served throughout the Pacific flying the B-29/RB-29 Superfortress. The Squadron began flying combat reconnaissance missions over Korea on 29 June 1950. Later that year, the Squadron returned to the United States and was assigned to the 5th Strategic Reconnaissance Wing at Travis AFB, California, flying the RB-36 Peacemaker. In 1960 the 31st was reassigned to the Strategic Air Command’s 4126 Strategic Wing (Provisional) and re-equipped with the B-52G Stratofortress. On 1 July 1986, the 31st was reactivated at Edwards Air Force Base, California and tasked with operational testing and evaluation of the United States Air Force’s newest weapons systems including the F-35 Lightning II, F-22 Raptor, B-1B Lancer, B-2 Spirit, B-52 Stratofortress, RQ-4 Global Hawk and MQ-9 Reaper.