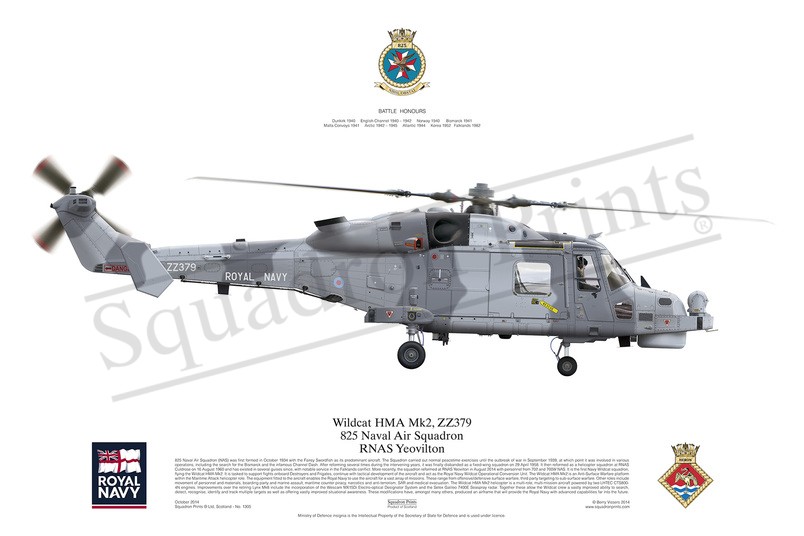 Squadron Prints Lithograph No. 1305 - Wildcat HMA Mk2, ZZ379, 825 Naval Air Squadron, RNAS Yeovilton. 825 Naval Air Squadron (NAS) was first formed in October 1934 with the Fairey Swordfish as its predominant aircraft. The Squadron carried out normal peacetime exercises until the outbreak of war in September 1939, at which point it was involved in various operations, including the search for the Bismarck and the infamous Channel Dash. After reforming several times during the intervening years, it was finally disbanded as a fixed-wing squadron on 29 April 1958. It then reformed as a helicopter squadron at RNAS Culdrose on 16 August 1960 and has existed in several guises since, with notable service in the Falklands conflict. More recently, the squadron reformed at RNAS Yeovilton in August 2014 with personnel from 702 and 700W NAS. It is the first Navy Wildcat squadron, flying the Wildcat HMA Mk2. It is tasked to support flights onboard Destroyers and Frigates, continue with tactical development of the aircraft and act as the Royal Navy Wildcat Operational Conversion Unit. The Wildcat HMA Mk2 is an Anti-Surface Warfare platform within the Maritime Attack helicopter role. The equipment fitted to the aircraft enables the Royal Navy to use the aircraft for a vast array of missions. These range from offensive/defensive surface warfare, third party targeting to sub-surface warfare. Other roles include movement of personnel and materials, boarding party and marine assault, maritime counter piracy, narcotics and anti-terrorism, SAR and medical evacuation. The Wildcat HMA Mk2 helicopter is a multi-role, multi-mission aircraft powered by two LHTEC CTS800-4N engines. Improvements over the retiring Lynx Mk8 include the incorporation of the Wescam MX15Di Electro-optical Designator System and the Selex Galileo 7400E Seaspray radar. Together these allow the Wildcat crew a vastly improved ability to search, detect, recognise, identify and track multiple targets as well as offering vastly improved situational awareness. These modifications have, amongst many others, produced an airframe that will provide the Royal Navy with advanced capabilities far into the future.